In Part 1 of this series, DR K R SHYAM SUNDAR examined the industrial dispute resolution mechanism under the new Industrial Relations Code. In Part 2 he argues for the establishment of an affordable, egalitarian and efficient justice dispensation mechanism that will help build industrial relations between employers and employees.

The objective of labour laws is to “ensure socio-economic justice to labour…”.

The First Five Year Plan clearly outlined the objective of the government with respect to compulsory arbitration: “The machinery and procedure relating to compulsory arbitration and adjudication of disputes should be so designed as to secure the essence of a fair settlement based on the principles of natural and social justice with the minimum expenditure of time and money.”

The three important shortcomings of adjudication in India are, viz. inadequacy of judicial institutions, lack of uniformity in awards and decisions, and undue delays in delivery of justice.

This institutional context  is unhelpful for efficient delivery of justice to the parties.  The situation is unlikely to have improved now, and even if it did, the deficit will not be far from this.

The very absence of a national data on Labour Courts and Industrial Tribunals is shocking. For example, to a question to the Labour Ministry as to the number of labour courts and tribunals set up across the country both in the states and union territories the Labour Minister answered in writing that “the details in respect of Labour Courts and Industrial Tribunals falling in the state sphere are not maintained centrally.”

Pendency of Cases in the High Courts and the Supreme Court

The most important and vexatious issue, in the awards given to judicial bodies, is  the lack of uniformity on substantive issues.

The Labour Appellate Tribunal (LAT), which was created in May 1950 to impart uniformity to differential awards by the Labour Courts and Industrial Tribunals ,  lasted till 1956 due to some legal infirmities and severe criticisms that were levelled against it by trade unions.

Since LAT was abolished, parties preferred appeals to the High Courts (HC) under Articles 226-227 or by Special Leave Petition under Article 136 and  Article 32 to the Supreme Court (SC).  Since Article 141 stipulates that the decisions made by SC will be binding on all judicial bodies and governments within India, the task of establishing uniformity in awards by Labour Court and Industrial Tribunals has been shifted to SC. This has meant clogging of cases in the HC and the SC.

The pendency or labour cases in HC is given in the table below (Table 1).

Table 1 Pendency of Labour Cases in High Courts as on December 31, 2013

The study by the Administrative Staff College (ASC) observed that the HCs took on an average 5 years and 2 months to dispose of a case. As on December 31, 2015, the judge population ratio for all the HCs for all-India was 1:20,24,364 and average cases per judge for all-India was 2,948 – obviously regional variations existed in these variables (see Table 4.4).

The Law Commission of India’s (LCI) report in 1987 spoke of the inordinate delay in delivery of justice due to the present legal system. The LCI (1987) noted 690 pending cases as on October 1, 1987 under Article 136 and 953 pending appeals as on January 1, 1986. It is worth quoting the LCI on this issue: “There is inordinate delay in disposal of all cases, including cases under the labour laws, coming before the Supreme Court, that the faith reposed in it that it will expeditiously pronounce its verdict and help in introducing uniformity has been belied.”

Some scholars have attributed the undue delays to the preponderance of juridification of industrial relations in India which has led to substantial legalism.

In fact, Law Commissions and other bodies have recommended the need for a separate National Court of Appeal and also establish regional branches to promote speedy disposal of cases and to aid easy and inexpensive access to the higher judiciary.

Analysis of Cases in Labour Courts and Industrial Tribunals

On September 21, the Labour Minister informed the Parliament that there are 22 Central Government Industrial Tribunals and Labour Courts functioning in the central sphere (which he did not mention) and in total 8,008 cases were pending for more than five years before them.

Section 33 of  Industrial Disputes Act (the Act) requires employers cannot change the conditions of service related to the matter to the prejudice of workers, while the application is pending before conciliation or adjudication proceedings. To put into force such change, the employer must take the permission of the conciliation and presiding officers.

The following figure (Figure 1) provides the proportion of the total number of cases disposed, which were referred under to the tribunals and courts after conciliation failed and on applications filed by workers under Section 33A and 33C of the Act. 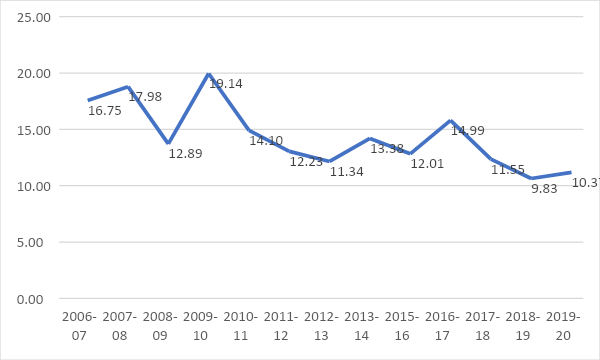 Note: As in the Text. Data for 2014-15 not available and hence not included. Source:  Indiastat. The original source is responses to questions raised in the Parliament by Labour Minister 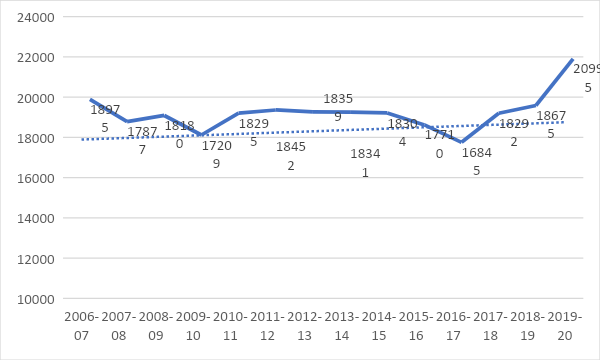 Note: The dotted line is the linear trend line Source: As for Fig. 1

Though there is a general declining trend in pending cases and applications, an upward trend can be observed since 2016-17.

Table 2 Percentage Distribution of Cases Pending before Industrial Courts and Labour Courts in India, as on October 13-14, 2020

The following table presents statistics relating to cases disposed of by industrial tribunals and labour courts.

Table 3 Percentage Distribution of Total Cases Disposed of by Duration, as on October 19, 2020

In response to a question on the reasons for pendency of cases before the central government judiciary, Labour Minister Bandaru Dattreya identified the following reasons, viz. “(i) Absence of affected parties at the time of hearing; (ii) Seeking of frequent adjournments by the parties to file documents; and (iii) Parties approaching the High Courts challenging orders of reference issued by the appropriate government as well as orders issued by the Tribunals on preliminary points;…”

The Parliamentary Standing Committee has observed that “cases remain pending due to vacancies in the Industrial Tribunals arising out of leave/resignation/transfer/death of the single member leading to delay in disposal of cases and having adverse impact on the labour welfare. Presently about 23000 cases are pending in 22 Central Government Industrial Tribunals (CGITs)…”

These aspects have been completely ignored in popular discourses on labour law reforms, that have instead concentrated on inconsequential reforms pertaining to hire and fire.

Some scholars have attributed the undue delays to the preponderance of juridification of industrial relations in India which has led to substantial legalism. Juridification is resorting to legal methods for redressal of industrial disputes and classifying issues into two watertight compartments as legal and illegal, rather than by collective bargaining or mediation,

This causes multiple inefficiencies in the process of conciliation and adjudication. Power inequalities mean that employers will engage well-trained Industrial Relations and Human Resource managers, and lawyers while workers will at best take help from outsiders like trade union leaders. Additionally, inordinate delays due to adjournments and “trust deficit” vilifies industrial relations in a firm or even in the system.

Focus must be on timely and affordable justice delivery mechanism

The objective of cheaper and expeditious justice delivery has been belied in the existing system. justice delivery. This is important to both parties and should also be a vital parameter for assessing ease of doing business.  These aspects have been completely ignored in popular discourses on labour law reforms, that have instead concentrated on inconsequential reforms pertaining to hire and fire.

The government must restructure the scheme of dispute settlement institutions provided in the Industrial Relations Code (IRC) along the lines of what various commissions have recommended. It should also appoint more judicial bodies and presiding officers. The government must set timelines for justice delivery, both in law and in practice, and audit them from time to time.

More importantly it must find answers to a pertinent question asked by LCI “Can it [case] be kept pending for ten years till the Supreme Court finds time to pronounce its decision on it … to bring about uniformity in industrial relations?” The LCI (1987) was clear that the SC cannot be a forum for regular appeals, which would clog its functioning. It was critical of the present system of undue involvement of HC and SC in industrial disputes settlement processes.

The government must set timelines for justice delivery, both in law and in practice, and audit them from time to time.

There is a serious need to think of a national appellate forum with original and appellate jurisdiction for imparting uniformity in awards and acting as a National Court of Appeal.  It should be vested with powers to exclude jurisdiction of all courts including the HCs but not SC, as conceived by LCI.  The First Law Commission succinctly observed that appeals to HCs in labour matters “would be a remedy worse than the disease”.

It is also a correct time to review the Workers’ Participation in Management Bill, 1990 and incorporate suitable provisions in IRC, as the institutions conceived by it will eventually produce a sound industrial relations system in the country. Deadweight institutions like work committees should be dropped or redesigned properly.

The industrial dispute settlement institutional framework must achieve two objectives, viz. strengthening bi-partism and providing for easy, inexpensive and quick adjudicatory forums and processes to the social partners. This was what envisaged in the 1950s by economic planners and is relevant even in 2020.

Preventive Detention Laws in India: A tool for executive tyranny?

Education, a casualty in the pandemic violating rights of students

Is Bihar a Police State in the Making?

With LG at Helm, Expect Policy Paralysis in Delhi