In the fourth of a five-part series on the absence of checks and balances on the State to ensure the effective operation of labour laws, and how it led to the shameful and tragic predicament faced by thousands of migrant workers across the country during the COVID-19 induced nation-wide lockdown last year, K.R. SHYAM SUNDAR delves into the poor quality of labour statistics and the need for reforms in labour inspections in India.

The system of annual returns submissions works as follows: The primary data-giving units are factories, shops and establishments, plantations, mines, ports and docks, contractors, and so on which are registered under their respective generic laws; for example, factories under the Factories Act, 1948. They are required, under the various labour laws, like the Factories Act, the Payment of Wages Act, 1936 (the PW Act), and the Contract Labour (Regulation and Abolition) Act, 1970 (CLRA Act), among others, to provide relevant data to government agencies.

Under the Trade Unions Act, 1926, registered trade unions of employers and workers are required to provide data. The State Labour Departments (SLDs) receive these returns. After due scrutiny of the returns, the SLDs compile the data for their respective states and send them to the Labour Bureau, the apex labour statistics body operating under the Union Ministry of Labour and Employment. The Labour Bureau cleans up and compiles the data and publishes it in its annual outlets and on its website.

The Bureau collects statistics on various labour variables statutorily, save a few, like strikes and lockouts, which are collected on a voluntary basis.

The basic shortcomings of the administrative statistics are two, viz. the primary units (employers and trade unions) default often and data coverage is restricted due to the existence of thresholds for applicability under labour laws. But during recent decades, especially in recent years, even the state governments have defaulted. They send incomplete or delayed reports due to non-compliance by the primary units, or due to their inefficiencies or work pressure. The problem is that major industrialised states like Tamil Nadu, Maharashtra and Gujarat have often been the defaulters.

Two outcomes of these combined deficits are as follows.

First, there is nothing called “all-India statistics”, which means the data published by the national agencies like the Labour Bureau does not cover even the restricted and proposed universe. Second, the SLDs send data erratically to the Labour Bureau. Hence, the available national data is not reliable. We cannot even compile a time-series data for most of the states and UTs.

India ratified the International Labour Organisation (ILO) Labour Statistics Convention, 1985 (No. 160) in 1992 and Labour Inspection Convention, 1948 (081) in 1949, and is bound to publish certain key labour statistics as provided under these agreements.

It is galling to note that despite the recommendations made by several commissions/committees, viz. the National Commission on Labour (NCL, 1969), the Working Group headed by T.S. Sankaran (1975), the K.C. Seal Committee (1981), the Study Group chaired by Professor Lalit Deshpande (1999), the Second National Commission on Labour (SNCL, 2002), and Professor T.S. Papola’s study for ILO (2014), the labour statistical system in India continues to suffer from many historical shortcomings.

Given these gaping holes in the labour statistics in India, it is ironical that the government emphasizes the important role of “statistics” in “policy making”. If social dialogue were driven by an “evidence based approach”, its outcome could be far more efficient than that based on “views and ideological positioning” of the “actors” in the industrial relations system (IRS), viz., the employers, trade unions and workers.

During the COVID-19 pandemic, as explained in detail in the previous parts of this series, none of the state governments or the central government had data on migrant workers or their plight, including job losses and deaths. It is also not clear as to what basis the central government reformulated the existing labour laws into the four Labour Codes, as major amendments with far-reaching consequences for all stakeholders have already been made.

This is another instance of “State Failure”.

Responding to and even endorsing the “inspector raj” critique of labour inspections, many states have introduced reforms surrounding inspections. [These reforms are too numerous to be detailed in this article and can be found here, as summarised by me.] Briefly, the reforms of the inspection system comprise of the following measures.

First, voluntary self-certification by employers which allows only a complaints-based inspections and one routine inspection in five years for prescribed labour laws (e.g., the “Self-Certification-cum-Consolidated Annual Return Scheme” for Boilers/ Economisers in Maharashtra).

Second, a risk-based inspection system is devised wherein establishments seen as high risks will be inspected more often (once in two years) than those seen as less (once in three years) or least (once in five years) risks (e.g., the “Computerised Risk Assessment based inspection” in Telangana).

Third, several governments have accepted annual third-party certification or auditing in place of the official inspection, and they would conduct inspections only in response to complaints (e.g., the “Third Party Certification/ Audit Scheme” in Haryana).

Fourth, inspections would no longer be universal and would now be determined by a combination of randomised and risk-based inspection systems (e.g., the “Transparent Central Labour Inspection Scheme for Random Inspection of Units”).

Fifth, many state governments have granted labour inspection powers to the Development Commissioner of the Special Economic Zones, who has the discretion to reduce inspections and does not possess technical skills akin to those in the Labour Departments.

Sixth, some states have classified inspections into mandatory and optional (such as Jharkhand).

Thus, we see that almost all the states have substantially liberalised the labour inspection systems. We see from the following figures (viz., figures 1 to 3) that inspections by the Factory Inspectorate and the SLDs have declined steeply during the post-reform period, i.e., 1991 onwards in three states, viz. Maharashtra, Haryana and West Bengal.

Source: Directorate of Safety and Health, Government of Maharashtra

These statistics highlight the fantastic and unachievable workload of the inspectors and hence, the narrow coverage of the inspection system. In 2011, 76.36% of the sanctioned posts of general factory inspectors and 57.76% of the chemical inspectors (specialists) were appointed, and the ratio of working factories per appointed inspectors was 365:1 (computed from data available here).

Fig 4: Number of inspection Visits and Irregularities Detected Under All Labour Laws in Maharashtra, 1991-92 to 2012-13 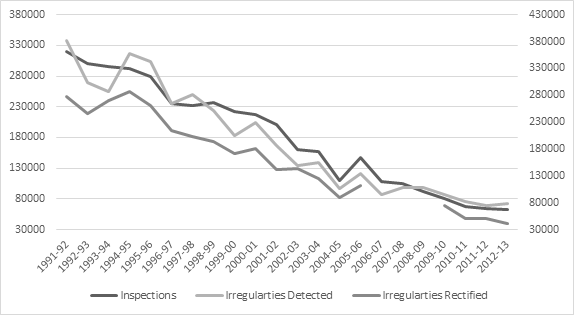 We see from the above figure (no. 4) that the total inspection visits under various labour laws administered by the Commissioner of Labour, Government of Maharashtra declined steeply – the inspection visits declined from 3.20 lakhs (0.32 million) in 1992-93 to 62,635 in 2012-13.  The decline in the irregularities detected could be interpreted either way, i.e., either to show the labour administrative system in a poor light or to compliment employers for being increasingly compliant. The elaborate submissions made by the Commissioner of Labour, the Government of Maharashtra, deserves full reproduction here, which would expose the internal contradictions in the entire labour market governance scheme.

The paradox is that on the one hand, the Government extends important labour rights but on the other, it does not have the capacity to secure the same for the target groups, who are the workers, especially those in the unorganised sectors.

“This criticism is not all together without substance. However, it must be stated here that, for proper enforcement, adequate machinery is necessary … the total number of establishments covered under the various scheduled employments in respect of which minimum rates of wages have been fixed/revised so far, are approximately 601,137 in 2009 and 595,776 in 2010, in the entire State (this does not include agricultural holdings). The total number of officers appointed as Inspectors under the MW Act (excluding Non-Gazetted MW Inspectors for Agriculture) are 131 in 2009 and 76 in 2010 (excluding 14), cadre posts working on Mathadi Boards and 4 administrative functionaries, only. Thus, each Inspector gets on an average 5,062 establishments for enforcement of MW Act, alone. It must however be remembered here that these Labour officers (sic) are also Inspectors under the labour enactments mentioned above as well. According to the present norms of inspections, each officer has to visit 100 establishments per month. At this rate, each officer would require more than 3 years (sic) time to cover all the 5,062 establishments under his charge in respect of the MW Act, alone. This inadequacy of the enforcement machinery is the largest single factor, which inhabits (sic) enforcement.”

Global workers’ advocacy organization IndustriALL has recorded 30 industrial accidents during May-June 2020 in India which killed 75 and injured more than 100 peersons. The industrial accidents include a gas leakage like the Bhopal Gas Tragedy, in LG Polymer in Andhra Pradesh, a boiler explosion in Yashashvi Raasayan Private Limited in Gujarat, accidents in chemical plants, coal mines, steel factories and boiler blasts in power stations.

The Labour Bureau collects statistics on industrial injuries only pertaining to the organised sector and within it, only factories, mines, railways, and ports.  It does not collect statistics on industrial injuries in industries like construction, plantation, and agriculture (which are highly accident-prone sectors) and the entire unorganised sector. Even this data is defective, as we have seen.

A retired Joint Commissioner of Labour makes a startling observation which is worthy of note here: “Very few big accidents get noticed where compensation to workers or dependents is paid. Majority of the accidents are hushed up and no compensation is paid in such cases.”

This article series is an updated version of an earlier article by the author published by Newsclick last year. It has been published as a chapter in a book written by the author titled ‘Impact of COVID-19, Reforms and Poor Governance on Labour Rights in India’ (Synergy Books India, 2021).