When wetlands become wastelands in J&K

Following a petition regarding the dumping of municipal waste in the wetlands of J&K, the NGT cited non-compliance of a Supreme Court order in MK Balakrishnan and others VS  Union of India. It directed the National Wetlands Committee to compile data about the status of environmental norms in all significant wetlands. While there are rules to protect over two lakh wetlands across the country, these are being flouted with impunity by the very people meant to protect them, writes RAJA MUZAFFAR BHAT reports from Srinagar.

Most of the wetlands in JK, some of which are Ramsar-designated sites, have either been encroached on by the land mafia or used for dumping municipal solid waste (MSW). Ironically, municipal institutions are allegedly involved in the destruction of wetlands as MSW collected by them is dumped around reserved wetlands and lakes.

A Ramsar site is a wetland site designated to be of international importance under the Ramsar Convention. The Convention on Wetlands, known as the Ramsar Convention, is an intergovernmental environmental treaty established in 1971 by UNESCO, which came into force in 1975. Ramsar is the city in Iran where this convention was signed for the first time in 1971.

The petition on conservation of three important wetlands of Kashmir, two of which are Ramsar sites (Wullar and Hokersar), was filed by me in March 2019.

In the past also, some interim orders were issued by NGT, but on July 22, 2021, the order was being viewed seriously as J&K’s top bureaucrat has been directed to oversee the preparation of an action plan within a time-bound manner and to update the NGT about it in the next hearing.

The order reads: “Let an action plan in respect of each of the wetlands be prepared within one month for action in a time-bound manner, with budgetary support and identified accountable persons. The plan may include among others remedial action against weed infestation, sewage discharges, solid waste disposal, encroachments etc. This may be overseen by the Chief Secretary, J&K in view of the significance of the matter and continued violation of orders of the Supreme Court, noted earlier. The Chief Secretary, J&K to remain present in person on the next date, by video conferencing, with compliance status as on 31.10.2021.”

When I moved the petition, I didn’t know its national impact or whether the NGT would take it so seriously. I was only concerned about Wullar, Hokersar and Kreechu Chadhara wetlands of Kashmir, but the NGT cited non-compliance of the Supreme Court order in MK Balakrishnan and others VS  Union of India.

On August 28, 2020, the NGT directed the National Wetlands Committee to compile data about the status of compliance of environmental norms in respect of all significant wetlands in the country.

It ordered that state pollution control boards and the State Wetland Authorities may give the management of wetlands in their areas to the secretary of the Union environment ministry within three months.

“On that basis a joint Committee of the Secretary and Chairman CPCB may give a consolidated report to this Tribunal before the next date by e-mail,” the NGT principal bench headed by Chairperson Justice AK Girl said.

The order said that conservation of wetlands in general and Ramsar sites in particular is a significant aspect of  environment protection.

It further reads: “To give effect to the Sustainable Development and Precautionary Principles, which have been held to be part of right to life and are to be statutorily enforced by this Tribunal under Section 20 of the National Green Tribunal Act, 2010, effective action plan and its execution is imperative.”

The ministry of environment forests and climate change, after notifying wetland rules in 2010, came up with a new set of rules in 2017 called the Wetland (Conservation and Management) Rules. It decentralises wetlands management by giving states and UTs powers to not only identify and notify wetlands within their territorial jurisdictions but also to keep a watch on activities that are prohibited around these water bodies.

The government, through these rules, seeks to protect over two lakh wetlands across the country. They will identify and manage the ecologically fragile areas which play an important role in flood control, groundwater recharge, preserving plant varieties, supporting migratory birds and protecting coastlines.

In its August 27, 2020, order, the NGT said that Wetland (Conservation and Management) Rules, 2017, contain elaborate provisions for the protection of wetlands and national and state wetland authorities were set up. “However, the fact remains that the wetlands are facing serious challenges of conservation as shown by the present case and other cases which the Tribunal deals with from time to time,” the bench said.

It said that the secretary of the environment ministry heads the National Wetlands Committee with 18 other members for their integrated management, monitoring implementation of the Rules and other allied functions. In spite of high-level authorities in place, there are widespread grievances of failure to manage some of the important wetlands, as in the present case and another matter that dealing with Sambhar Lake in Jaipur, the NGT said.

The NGT in its July 22 order said that state governments had not complied with earlier orders or directions given by the central government.

It directed that this should be implemented within a period of four weeks, failing which the Tribunal would be constrained to require the presence of chief secretaries of state governments, in addition to the imposition of heavy costs, keeping in mind the necessity of conserving whatever water bodies.

The J&K Pollution Control Board (PCB), now renamed Pollution Control Committee (PCC) after the state was downgraded to a Union Territory, imposed a penalty (environmental compensation) of over Rs 64 lakh on Municipal Council, Bandipora, as it found it to be defying MSW Rules, 2016, by dumping all untreated MSW near Wullar wetland area at Zalwan.

I brought the matter to the notice of NGT through my petition. Unfortunately, Municipal Council, Bandipora, lied to the Tribunal several times, saying it was not dumping MSW around the wetland area near Zalwan. I provided several photos to the NGT and even the local residents did so. The local municipal councillor and masjid committee of Zalwan too wrote a letter to NGT seeking its intervention to clear the municipal waste from the area.


The J&K Pollution Control Board (PCB) through its Order Number: 45- PCB of 2021 on February 9, 2021, directed the Executive Officer, Municipal Council, Bandipora, to deposit Rs 64,12,000 to the Environmental Compensation Fund (ECF), within 45 days. But even after five months, the concerned executive officer hasn’t deposited the money. It is learned that he has gone to court and got relief. Pollution control committee officers told me that they are fighting the case legally and soon the compensation will be realised from Bandipora municipality.

In another case, an environmental compensation of more than Rs 1.30 crore was imposed on Municipal Council, Sopore, on November 24, 2020. The municipality was dumping its MSW at Ninglee area, which is also located on the banks of Wullar Lake. The illegal activity came to a halt after the intervention of the J&K High Court as locals, through the Central Auqaf Committee, filed a PIL on the issue.

Unfortunately, the Municipal Council, Sopore, started dumping MSW in another area that was only one km away from the old site. The new site is a demarcated forest land under Ninglee forest range of Baramulla.

This area is also a wetland catchment. The local panchayat land has also been encroached on by the municipality without any consent from the panchayat committee.


The district administration of Baramulla is supporting the municipal council in this illegal work and in spite of a resolution adopted by the local gram sabha for clearing the site, the garbage site is not being closed down. Dead animals and biomedical waste are also dumped here. This has been operational for more than six months now.

In its August 27, 2020, order, the NGT’s Principal Bench directed the Divisional Commissioner, Kashmir, to consider the suggestions I had made regarding utilising funds available for solid liquid waste management in rural areas under the Swachh Bharat Mission (Gramin). 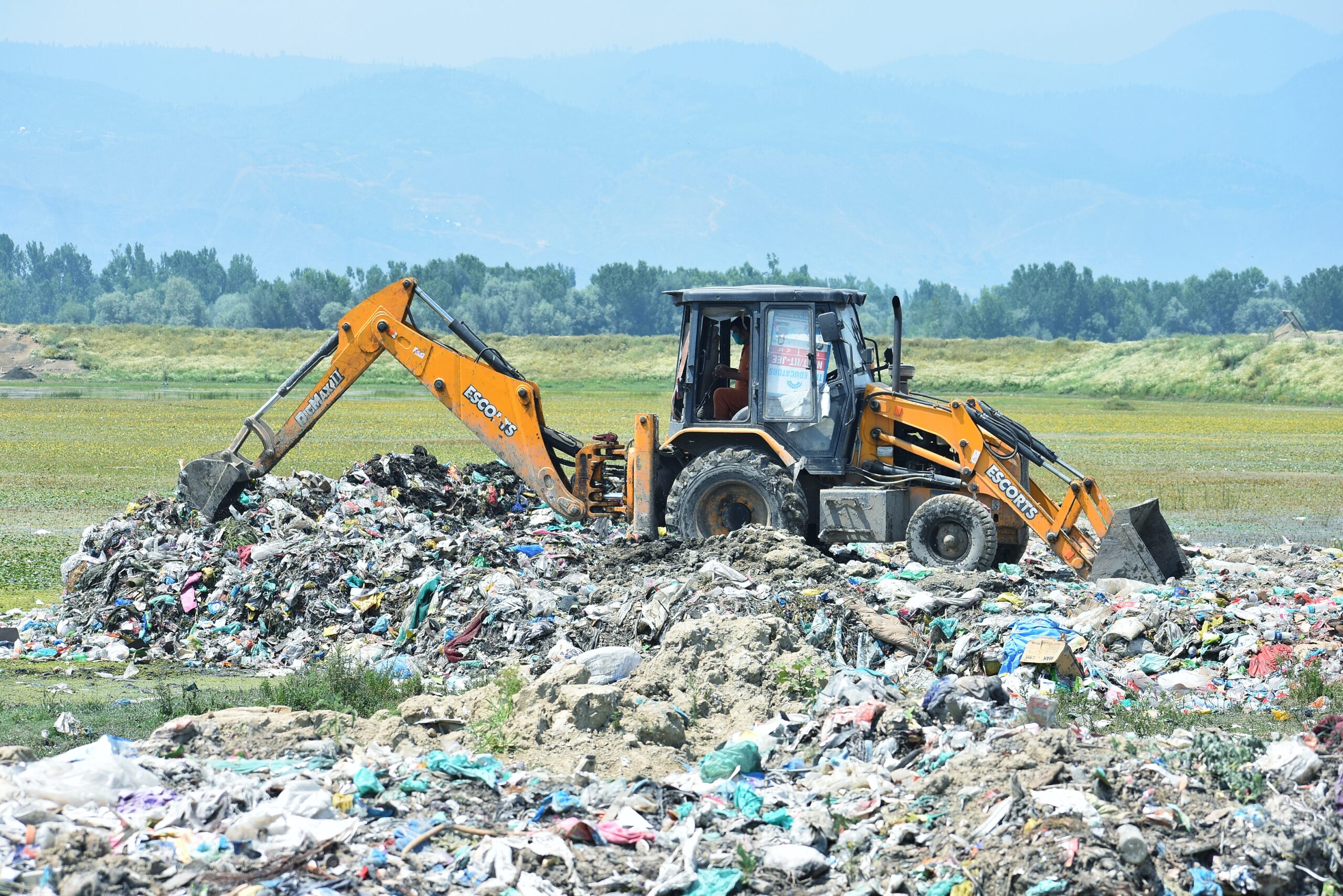 As Hokersar, Wullar and Kreenchu Chandhara wetlands are located in rural areas, the Mission directorate of SBM Gramin could easily take up waste management work in these areas under its rural waste management programme. Rs 15-20 lakh grant is provided to each village by the drinking water and sanitation department of the government of India. However, not a single penny has been utilised around villages located in the three wetland areas for which I had gone to the NGT.

Even after a year of NGTs orders, the J&K government has taken no steps to utilise the SMB Gramin funds for managing solid and liquid waste around wetlands.