No Result
View All Result
in Miscellaneous

UP leads in number of complaints to NHRC of alleged harassment of human rights defenders; TN and Odisha follow closely, Centre to LS

The Central Government Sunday informed Parliament that a total of 306 complaints were received by the National Human Rights Commission (NHRC) alleging harassment of human rights (HR) defenders during the last three years and the current year till August 31. Maximum 52 complaints during the period were received from Uttar Pradesh followed by Tamil Nadu and Odisha with 33 and 26 complaints respectively. 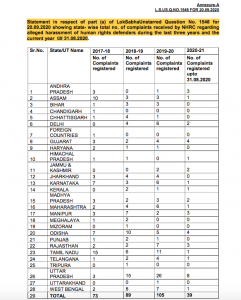 Citing information provided by the NHRC, the Minister informed that NHRC made the recommendation for monetary relief of Rs. 13.25 lakh in five cases (one each from Bihar, Karnataka, West Bengal, Chhattisgarh and Tamilnadu) during last three years and the current year till 31.08.2020. However, release of HR defenders is a matter within the jurisdiction of respective Courts, the minister said.

On the question of targeting of some human rights defenders by the NSO Group’s Pegasus spyware in 2019, the minister said no such information is available with his Ministry.

He added that the NHRC has a dedicated focal point for receiving and examining complaints about alleged violation of Human Rights of HR defenders.

“The complaints are processed on priority and taken up with the authorities concerned in the State Government for ensuring protection to the HR defenders as well as redressal of their grievances”, the Minister said.