UP: About 1,000 Workers of EMRI’s 108 ALS Ambulance Service Get Termination Letters

The Yogi Adityanath-led government has awarded a new tender to Ziqitza Healthcare on May 31, which has already advertised for fresh recruitments, says union.

About 1,000 ambulance workers from the workforce of GVK-Emergency Management and Research Institute (EMRI), the ambulance service provider that runs the Advanced Life Support (ALS) ‘108’ service in Uttar Pradesh, are at immediate risk of losing their jobs.

According to their union, several employees have been served termination letters after the Yogi Adityanath-led Uttar Pradesh government reportedly awarded a new tender to Ziqitza Healthcare Limited on May 31, a new firm which has been managing the 104 Helpline service in Madhya Pradesh, Jharkhand and Odisha. The new firm has reportedly advertised for fresh recruitment.

The Ambulance Karmchari Mahasangh has written a letter to the Chief Minister, demanding that all ambulance workers be accommodated with new company but there has been no response so far. The ambulance workers have been working almost 24×7 during the pandemic as ‘COVID warriors’, and therefore, this sudden threat of losing jobs has come as a shock to them.

“During the tenure of the Samajwadi Party (SP) government, chief minister Akhilesh Yadav had started the 108 ambulance service and in 2016. His government also started the Advanced Life Support (ALS) service in 2016 while the102 project was initiated by then Centre and state government in 2012. But, after ALS was started in the state, most of the employees of 109 and a few from102 were accommodated under ALS service after training. As of now, at least three ambulances, equipped with life-saving devices, are available to each of the 75 districts across UP and on each ALS, four employees are deployed — two drivers or pilots and two emergency medical technicians (EMT). A total 1,000 employees are working on around 250 ALS in the state,” Abhishek Kumar Mishra, state spokesperson of Ambulance Karmchari Mahasangh, told NewsClick.

Mishra said these employees have been working for 8-9 years and entire fraternity served the government, people and its employers GVK EMRI selflessly amid pandemic. “Where will these employees go now? Will they be left to beg”? he asked.

Accusing the previous contractor GVK-EMRI for not officially informing workers prior to ending of their contract, Hanuman Pandey, an office-bearer of the drivers’ body, told NewsClick: “We have been associated with GVK-EMRI as ambulance workers for the past eight-ten years, yet the administration is not bothered to follow due procedure and give us a notice period if the tender has been awarded to a different company. If it had, we could have at least informed our workers a month ago to look for new jobs.” He demanded that all employees should be accommodated in the new company.

According to the union leader, everyone has been given termination letter since Ziqitza Healthcare Limited started hiring new people on their own terms, ignoring the previous employees hired by GVK-EMRI. The workers claim that the administration has not made any attempt to speak to them.

Meanwhile, at least nine ambulance workers have died due to COVID-19 in span of two months in Uttar Pradesh and they are struggling to get the promised Rs 50 lakh insurance under Pradhan Mantri Garib Kalyan Package for corona warriors.

“Even employees who died last year during the first wave of corona, have not received any such amount promised by the government. Not a signal representative of state government has visited the deceased’s family so far,” claimed Mishra. 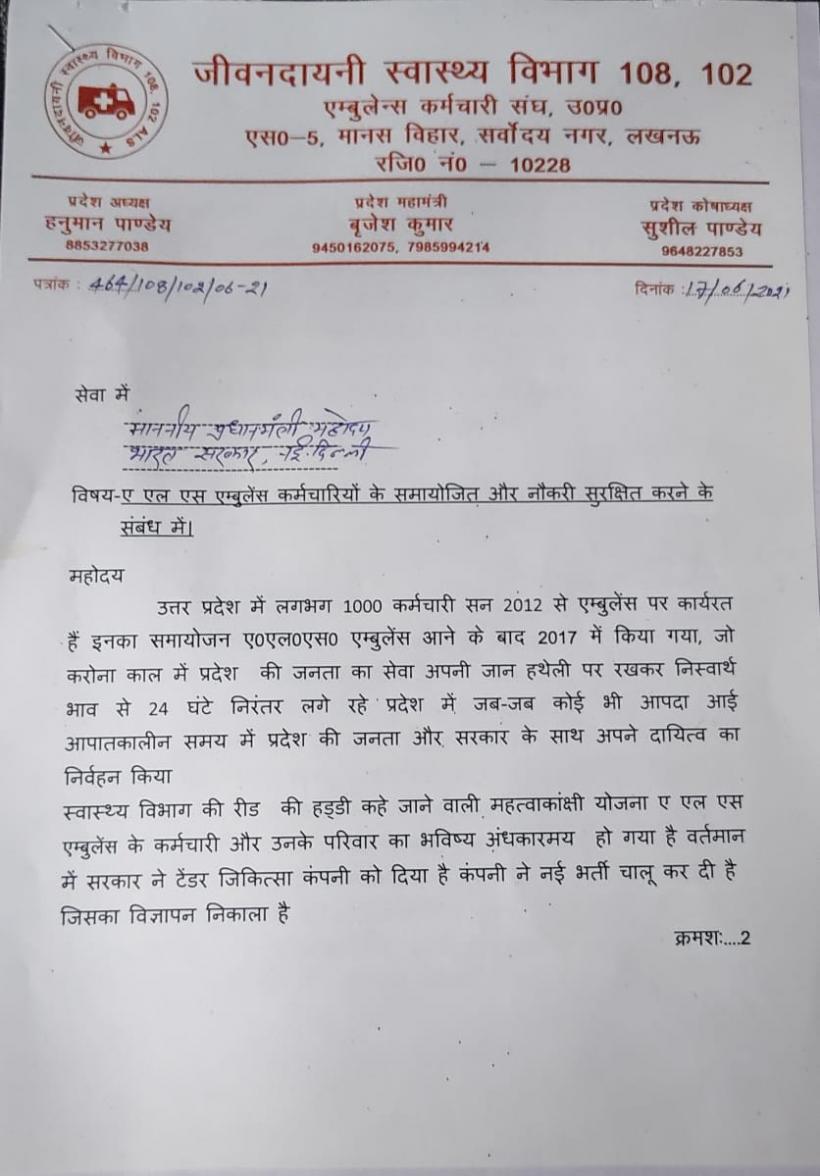 NewsClick approached GVK-EMRI head Dr. GVK Reddy, know his stand, who said: “The ALS project was started in Uttar Pradesh soon after Yogi Adityanath took the charge in 2017 and was ended in 2020 after the company has not received financial support in the form of funds from the state government in one year despite repeated requests. We were forced to close the project.”

Reddy said they have some issues and dispute with the government regarding funds and, therefore, they served the notice its employees and were closing its ALS project as of now or until the dispute is resolved.

Reddy further said that the new company has changed the basic eligibility criteria for the recruitment of ambulance workers, especially emergency medical technicians; earlier people who had passed intermediate exams were hired but under this new tender, only experienced persons who have worked for National Health Mission or worked in 100- emergency ward are being hired.

NewsClick made several calls to the new company Ziqitza but these went unanswered.

The Cruelty of Clemency: Mercy Petitions and the Abolitionist Discourse

Right to be forgotten does not exist in case of court judgments, rules Madras HC