Rashtriya Shaikshik Mahasangh has demanded postponement of remaining phases of UP panchayat polls or vaccination for all on duty.

As polling for the third phase of panchayat elections ended on Monday, as many as 135 teachers, ‘shiksha mitras’ and instructors have died in the past 10 days due to confirmed COVID and COVID- like symptoms after performing panchayat election duty in the state, as per Rashtriya Shaikshik Mahasangh (RSM), a national level outfit of primary school teachers.

The union has asked Chief Minister Yogi Adityanath to immediately postpone panchayat elections and provide free treatment to the infected employees. It has also demanded the government declare these employees as frontline workers and provide Rs 50 lakh insurance cover for the kin of the deceased.

“On April 14, my husband left home for election duty and did not return on same day due to workload. The next day, news came in that he is having breathing problems and mild cough. His colleagues took him to Vedanta Hospital in Azamgarh on April 15. After a few days in the ICU and then ventilator, he died on April 21,” a distraught Nupoor, his wife, told NewsClick, adding that not a single representative of the government has so far tried to find out the situation of the family.

“I want to ask the government why teachers were deputed for elections despite corona creating havoc in the state? Aren’t they human? Who will take the onus of my husband’s death?” said a weeping Nupoor.

Another family in Gonda district is mourning the death of thier lone breadwinner who was also posted on panchayat poll duty.

Ravindra Dubey, a shiksha mitra, was deputed on panchayat election duty during the first phase. He tested positive soon after he returned from duty. His father, Bholanath Dubey, told NewsClick: “My son was a shiksha mitra in primary school at Ranjitpur, Katra Bazar block, and was posted during the first phase on April 19 in Nawabganj. Soon after he returned from there, he complained of fever, cough and breathing problems. When we took him to a district hospital, his report was COVID positive. He died on April 24.”

Dubey, too, complained that not a single government official had come to his place to show express condolences so far.

NewsClick spoke with at least a dozen of family members of teachers, shiksha mitras and assistant teachers in Gonda, Bahraich, Shravasti, Lakhimpur and Gorakhpur, who were posted during panchayat polls, some of whom lost their lives in the past 10 days.

The family members of all those who lost their lives said that their loved ones did election duty last year and this year as well. They alleged they had appealed to the state government several time for vaccinations but were turned down. Despite having all symptoms of COVID, these persons were asked to report for duty, which eventually led to their death, the claimed.

Sushma Kannaujiya, principal of a primary school in Lakhimpur, had requested that her election duty be cancelled after she developed mild symptoms of COVID a day after election training, but it was declined. She died on Wednesday.

“She kept pleading that her duty should be cancelled since she was having all the symptoms of COVID, but it was turned down by the district administration. She died last Wednesday gasping for breath,” Kannaujia’s son claimed while speaking with NewsClick.

NewsClick has reported earlier that scores of employees had taken ill after panchayat poll duty, yet their application for replacement was turned down.

Virendra Mishra, national spokesperson of RSM told NewsClick that there was uneasiness in the families of teachers and employees who were on duty in the panchayat elections.

Seeing the surge of coronavirus cases across the state, no one wants to do election duty. Thousands of teachers, ‘shiksha mitra’ and instructors have reportedly contracted the virus or corona-like symptoms during the first phase of training till the third phase of election. 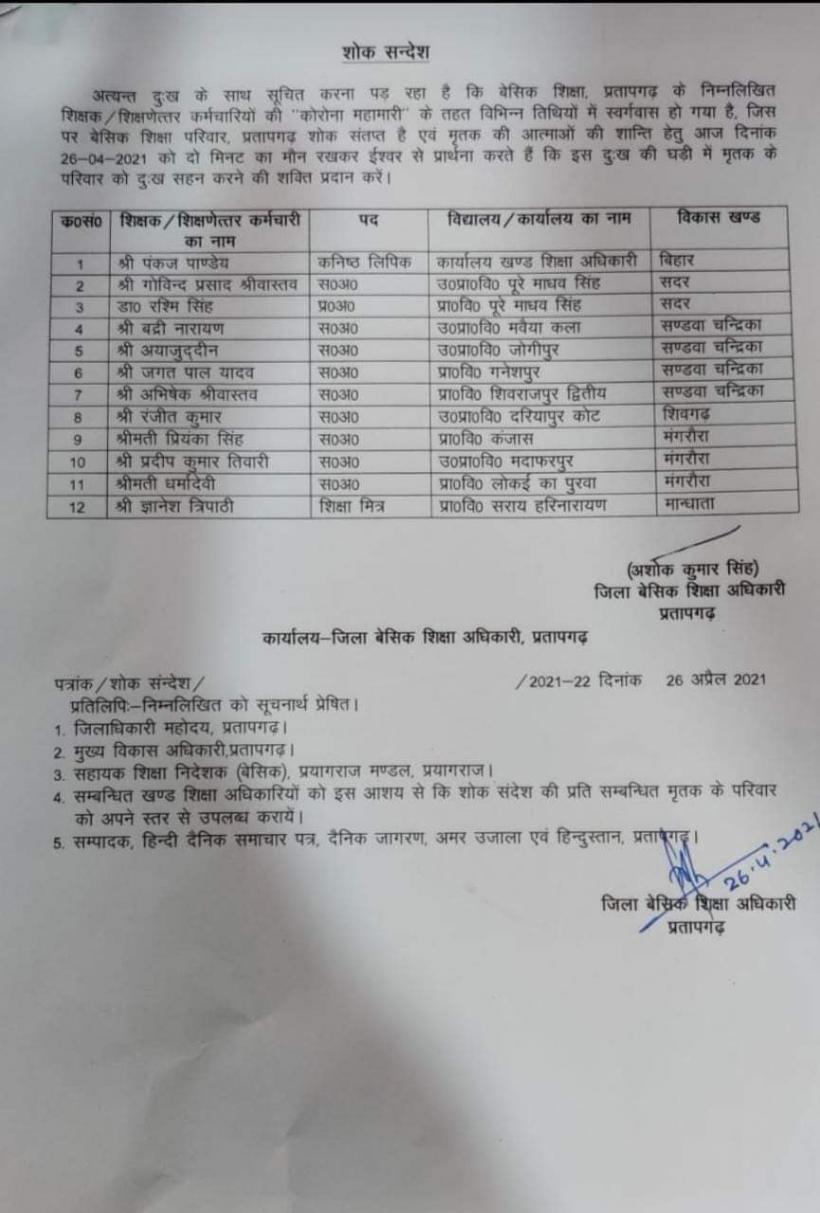 “More than 300 people posted on panchayat election duty have died due to coronavirus but I have collected data of only 135 people so far. Panchayat polls took place in 38 districts in first and second phase which was held on April 15 and 19, respectively. This data, of 135 employees dying was only during the first two phases. The third phase was completed yesterday (Monday) in 20 districts and casualties will be known in a week,” Mishra said, adding that the death toll may increase. He said RSM had collated the data at the primary level, and several districts had been left out due to communication.

Accusing the state government of “playing with their lives” of teacher and shiksha mitras by assigning them poll duties without providing them enough protective gear at a time when the second wave of the pandemic is taking a heavy toll, the RSM spokesperson said: “We have not been given necessary safeguards by the government for election duties. Even those who complained of mild symptoms of COVID were asked to report on duty after taking medicine. The district administration was not ready to exempt any employee despite their report being COVID positive,” alleged Mishra.

Airing their concerns, teachers’ outfits wrote a letter to Chief Minister Yogi Adityanath demanding his immediate intervention and seeking postponement of the last (fourth) phase of panchayat poll, which is scheduled to be held on April 29.  The union has also sent the letter to the Uttar Pradesh Primary Education Minister Satish Dwivedi and Additional Chief Secretary (education) for urgent action.

As per letter written to the chief minister, accessed by NewsClick, after election training and duty till now (second phase), 10 staffers in Hardoi and 10 in Lakhimpur died. while 8 each in Bulandshahar, Hathras, Shahjahanpur and Sitapur; 7 each in Bhadohi, Lucknow, Pratapgarh, 6 in Ghaziabad, Gonda and Sonbhadra, in Deoria, Kushinagar, Jaunpur, Mahrajganj, Mathura witnessed five death in every district, four each in Gorakhpur, Unnao, Bahraich and Balrampur. Three people died in Shravasti, but accidentally.

NewsClick made several calls to the District Magistrate, Pratapgarh, seeking his response but all went unanswered.

Meanwhile, another letter written by Basic Shiksha Adhikari, accessed by NewsClick confirmed 12 deaths in Pratapgarh alone. “It is with great sadness we inform you of the passing of teachers due to coronavirus,” the letter signed by BSA, Pratapgarh, Ashok Kumar Singh, reads.

In its letter to the chief minister on April 24, two days before the fourth phase of panchayat elections, the union had said that lives of over 2.31 lakh state employees were at stake as they were working without any safety gears. The union appealed to the Election Commission and State Election Commission (SEC) to postpone the remaining two phases of panchayat polls, saying that this election could become a “super spreader” event amid the recent surge in coronavirus cases. Newsclick has earlier reported that the state government employees association had appealed to Adityanath on April 20 to focus on fighting COVID-19 rather than deputing resources for the conduct of panchayat elections and demanded postponing the remaining phase. 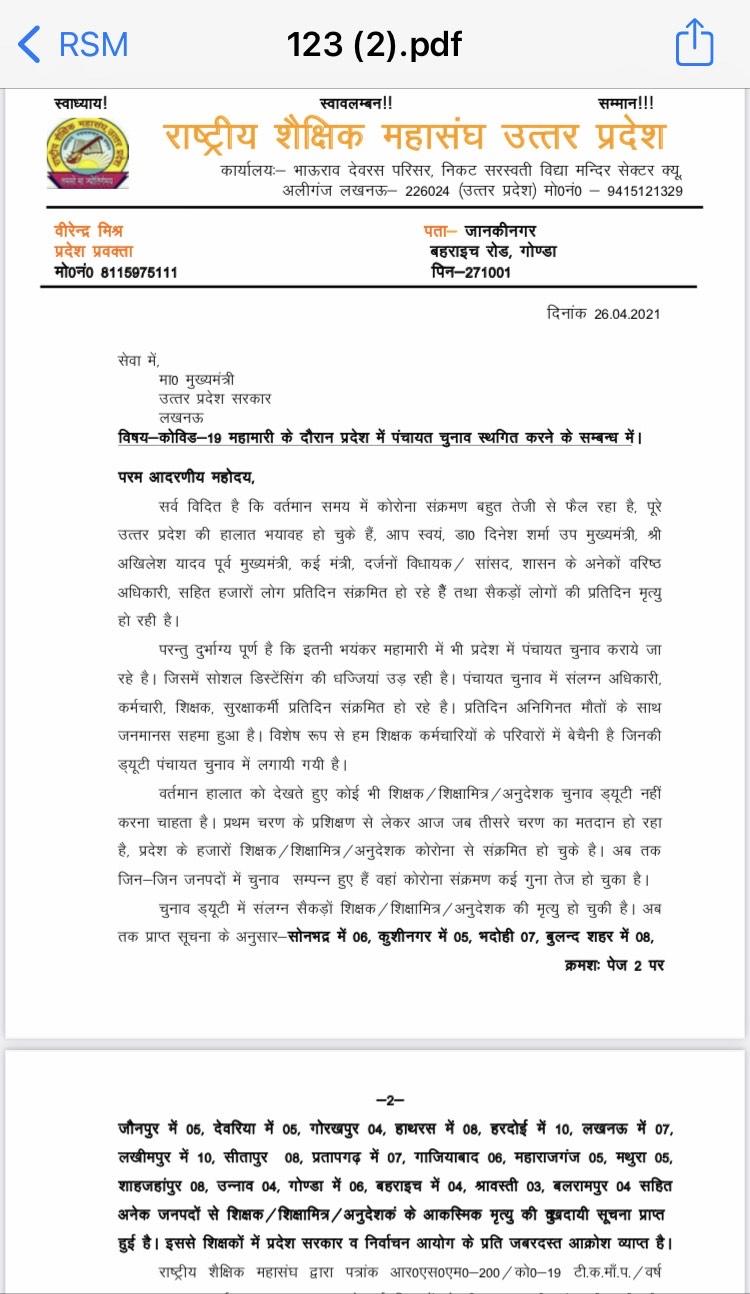 Shiv Shankar Singh, organisation secretary of Rashtriya Shaikshik Mahasangh, Uttar Pradesh unit, told NewsClick: “The problem started soon after the district administration organised training for panchayat elections. In a 50X30 room, there were around 60-70 staffers during training and adherence to the COVID-19 protocol became a joke. More than 80% of people could have been saved had the training was organised online via Google or Zoom,” said Singh, adding that the death toll could be two times higher than current data.

“I got to know at least 22 teachers and other staff posted during panchayat polls had died in Rae Bareli alone. I have full data of everyone. This is happening due to sheer negligence of state government as they did not pay heed when we raised the demand to postpone the election or vaccinate those going on polls or organise online training. Thousands of staffers have been infected and are in home isolation but not a single government representative has taken cognizance of the fact that their families are struggling to get a bed in hospital,” Singh said.’