As West Bengal finished up with the third phase of its marathon assembly elections, ARUN SRIVASTAVA writes about the accusations of violence BJP and TMC candidates have levelled against each other, and disturbing allegations against central forces and the Election Commission of acting in favour of the BJP.

DEPLOYING a huge contingent of central security forces in the state, Union Home Minister Amit Shah had assured the people of West Bengal that it would ensure peaceful, fair and free election. But his high-sounding promises have turned out to be a chimera in light of recent events.

While the claim of impartiality of the central forces was questioned during the first two phases of the assembly election, during the third phase, the security personnel have been caught with their proverbial pants down. In almost all the polling booths spread across 31 constituencies in three districts, the personnel have been accused by both the All India Trinamool Congress (TMC) and the Bharatiya Janta Party (BJP) of intimidating their voters into not voting.

Violence reported in several places in third phase of polls

Even the state Chief Minister [CM] Mamata Banerjee, campaigning in North Bengal during the day, tweeted a video, claiming that central forces on poll duty in Bengal were trying to secure votes for BJP. “The blatant misuse of central forces continues unabated. Despite us repeatedly raising this issue, the [Election Commission of India] continued to be a mute spectator while men in uniform are being misused at several places to openly intimidate TMC voters and influence many to vote in favour of one party,” Mamata wrote in that tweet.

In most of the booths, the central forces seemed to maintain a passive attitude to the misdemeanour of BJP cadres of driving away TMC’s polling agents. In some places, they allegedly threatened even the TMC candidates to leave the place. 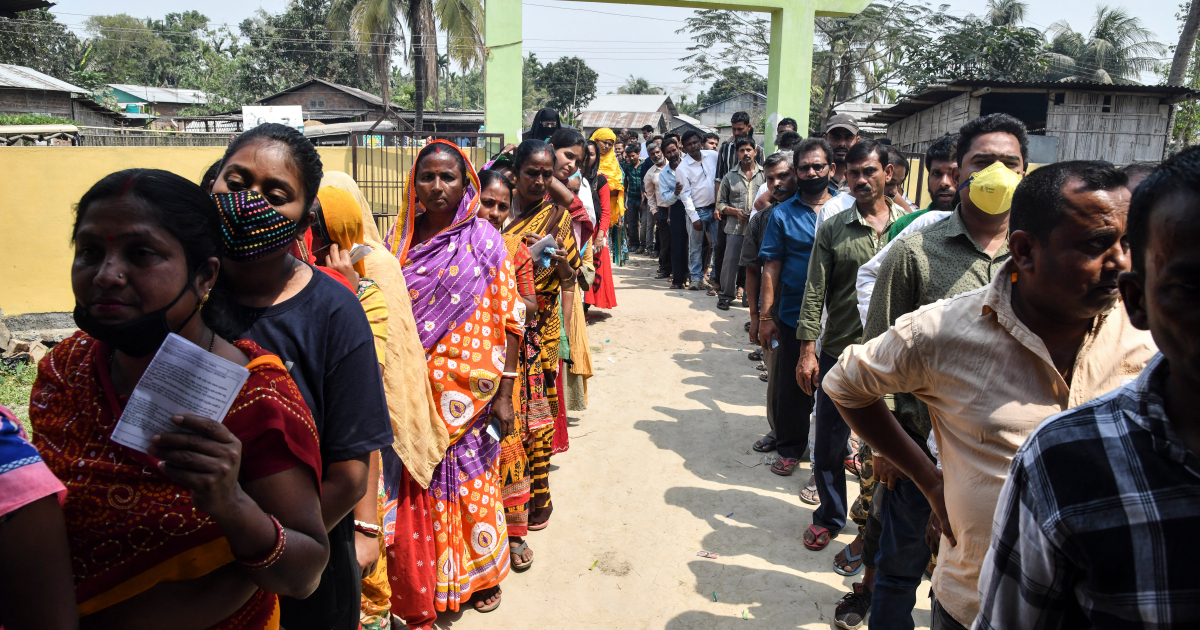 The TMC nominee from Arambagh in Hooghly, Sujata Khan Mandal, was chased by a group of alleged BJP supporters at Mahallapara, Arandi, where she had gone to look into complaints of rigging in some booths. Mondal, who is the wife of BJP Member of Parliament Saumitra Khan, said: “My bodyguards saved my life… I came to know that BJP members were thwarting people from casting their votes in Arandi. I went there to find out what went wrong. I was assaulted, hit with bamboo sticks by saffron party men.”

Khan alleged: “The BJP had plans to rig the booths and would not allow any of our voters to step out of their homes. Once I reached there, villagers started coming out of their homes to vote. BJP goons chased me with lathis and I had to run to the fields to escape”. She claimed some of the blows landed on her neck and back. She also demanded that voting be declared void in two of the booths.

However, her BJP competitor Madhusudhan Bag claimed that no one from his party attacked Mondal. “It was the villagers who put up a resistance when the TMC leader tried intimidating them,” PTI quoted him as saying.

Even BJP candidate for Uluberia South, actor Papia Adhikary, was attacked by alleged TMC supporters when she went to visit an injured BJP worker at the Uluberia sub-divisional hospital. “The men were armed with sticks. I have never faced such a situation,” Papia alleged, adding that she would complain to the Election Commission [EC].

State minister and TMC candidate Nirmal Maji alleged that two of his security personnel were injured in an attack at Mukti chowk in Uluberia North.

Sunil Roy, a 72-year-old TMC leader, passed away on Tuesday while on his way back from the booth after casting his vote. TMC alleged her was attacked by BJP supporters that led to his demise.

The EC, which was quite pro-active in responding to violence in Nandigram during the second phase of polling, has been conspicuously impotent and inaccessible during the third phase.

TMC MP Derek O’Brien wrote to the EC on Tuesday: “You are called upon to apprehend the goons of BJP, ensure that no corrupt practices take place, ensure the safety of our workers/members, ensure that polls are conducted freely and fairly”. But no action has been initiated so far.

With the BJP terrorising the male booth agents of TMC and resorting to the use of violence to prevent them from coming to the booths, CM Banerjee directed her party leaders to depute women as polling agents to replace “cowards” who leave booths unguarded on voting day in the face of threats from the BJP.

Her directive came after her party failed to depute polling agents at some 28 polling stations in Nandigram on April 1. She said; “I am not ready to listen to excuses like BJP’s threats or BJP’s attacks for not (someone from TMC) being present at the booth on the day of polling. I request those who are not brave, please don’t go to the booth. I am asking you (leaders) to depute women as polling agents in a booth. Assign my Kanyashree sisters, my students as polling agents,” at a rally in Hooghly’s Khanakul.

She also revealed the reason for going to the polling booth in Nandigram’s Boyal on April 1 and staying there for over “two hours”. She said that it was to foil the BJP’s “plan” to capture 70 booths with the help of the police or BJP supporters in police uniforms. She said; “They had planned to cast false votes in 70 booths. I did not enter inside the booth but waited outside. I know the rule. Let the (Election) Commission send me a notice. (IPA Service)