A herd of wild animal roaming in the fields at the sanctuary.

More than 50 blackbucks have been preyed on by stray dogs in Punjab’s Abohar Wildlife Sanctuary, situated across 13 villages inhabited by the Bishnoi community, in the past three years. As authorities fail to curb the menace, Bishnois fear that the open sanctuary will shrink in near future, reports VIVEK GUPTA from Chandigarh. The Bishnois are very protective of them and were behind creating public opinion when celebrities like Salman Khan reportedly hunted them when he was in Rajasthan for a shoot. The case is still being heard. Had it not been for them, a case would probably never have been filed.

A wildlife sanctuary is a reserved area where animals and birds live a protected life. However, Punjab’s Abohar Wildlife Sanctuary, famous for its endangered blackbucks, is unique. Endemic to the subcontinent, the antelopes of Abohar roam around the streets and farms and even take shelter inside houses at night—thanks to the animal-loving Bishnoi community. The Bishnois had moved a proposal in the 1980s to declare their private and community land in their 13 villages in the vicinity of Abohar as an open wildlife sanctuary.

According to information on the website of the Department of Forests and Wildlife Preservation, the sanctuary is spread over 18,650 hectares. It was first declared a wildlife sanctuary vide a Punjab government notification dated 01-06-1993 for five years. The status was extended for five more years on 20-08-1998 before the state government issued the final notification on 07.09.2000.

The Bishnois and the blackbucks have coexisted in this part of the world for centuries. The community’s unflinching bond with the fast-dwindling antelopes played a critical role in the conviction of actor Salman Khan in the blackbuck hunting case in Jodhpur, Rajasthan.

During the shooting of his blockbuster movie ‘Hum Saath Saath Hain’, Bollywood actor Salman Khan allegedly killed two blackbucks in Bhagoda ki Dhani located in Kankani village near Jodhpur. He was charged under section 9/51 of the Indian Wildlife (Protection) Act, 1972.

The actor was found guilty and sentenced to five years imprisonment for killing the two blackbucks in a trial court in Jodhpur in 2018, while all his co-actors were acquitted of their charges.

The judge observed in his 201-page verdict that the accused is a popular actor whose deeds are followed by people. Despite this, the accused hunted two blackbucks. It is not justified to give him the benefit of probation in view of the manner in which he hunted by shooting two innocent, moot blackbucks that come under the purview of the Wildlife Conservation Act. Considering the rising number of cases of illegal hunting of wildlife animals, looking at the circumstances of the case and gravity of the offence, giving the benefit of the Probation of Offender Act does not appear justified, the judge added.

After conviction, Salman had filed an appeal in the district and sessions court (Jodhpur district) against the five-year sentence. The matter is still under consideration.

Also read: 20 years later, this is why Salman Khan is still hated by the Bishnois of Jodhpur

Several years ago, a new threat to the blackbucks emerged in the form of stray dogs, which started attacking wild animals for food. Besides, the habitat of blackbucks started shrinking due to the increase in cultivated land.

The number of blackbucks decreased from 3,500 in 2011 to 3,273 in 2017, according to a census jointly conducted by the Punjab Biodiversity Board and the forest and wildlife department. Punjab has approached the Wildlife Institute of India, Dehradun, for conducting a fresh census of blackbucks.

Area range officer Anita Rani told The Leaflet that the blackbucks are not under threat from poachers and hunters but stray dogs. In 2018-19, the dogs killed 25 blackbucks and more than 50 were rescued inside the sanctuary, she said.

Dogs on a killing spree

Blackbucks have been killed outside the sanctuary as well since they frequently move out and become easy prey for the stray dogs, according to Rani. No survey has been conducted to find out the number of stray dogs in and around the sanctuary, but they are in considerable numbers.

Rani also said that the dogs have killed as many as 84 blue bulls (Nilgai) in the past two-and-a-half years. She feels sterilisation of stray dogs is the only way to curb the menace. “We recently discussed the problem in a meeting chaired by the deputy commissioner of Fazilka. We are in process of hiring some agency for sterilising the stray dogs inside the sanctuary.”

There was also a proposal to sterilise and shift the dogs out of the sanctuary. “However, Animal Birth Control (Dogs) Rules, 2001, make it mandatory to release a sterilised dog in the place or locality from where it was captured,” Rani informed.

The Bishnoi community faces the unique dilemma of saving both the hunted and the hunter: on one hand, they want to save the blackbucks and on the other, they don’t want to harm the dogs.

“It is appalling the way the stray dogs form a group of 20 or even more and pounce upon the blackbucks,” said RD Bishnoi, the president of Akhil Bhartiya Jeev Raksha Bishnoi Samaj. The community had approached the wildlife department and even the local administration on several occasions but to no avail. 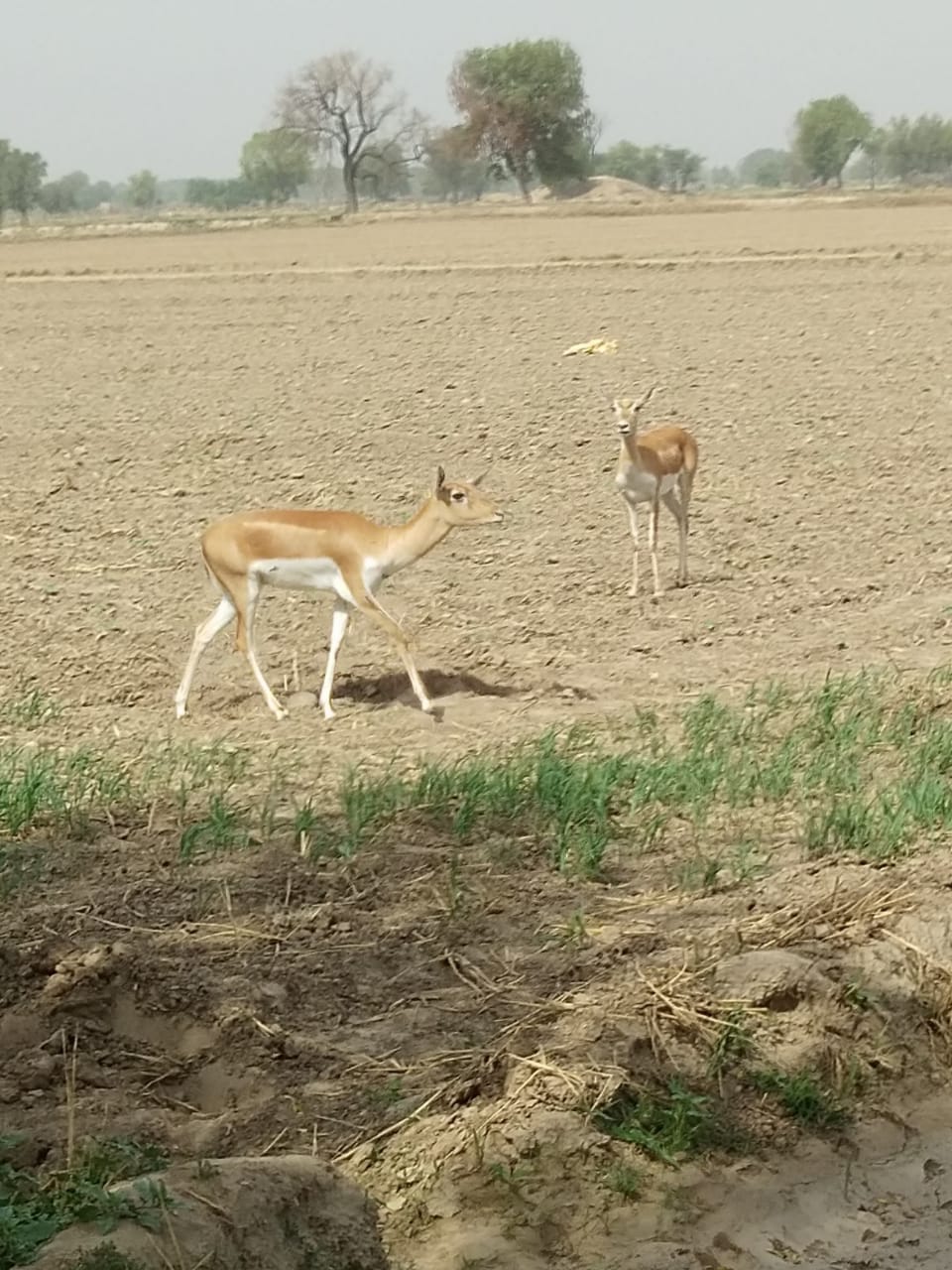 “We fear that the size of the sanctuary will decrease in five to ten years if the stray dog population is not controlled,” Bishnoi said.

Though the Bishnois are not in favour of killing dogs as harming any animal is not part of their tradition, they want them to be sterilised. “We want the government to strike the right balance. If the sterilisation drive is started today, it will take a few years to control the dog population and then gradually bring it down,” Bishnoi said expressing sadness at the “government insensitivity”.

Following the merger of the wildlife and the forest departments, the top bosses, who all are from the forest wing, do not care much about the safety and preservation of animals, Bishnoi said. The staff of the wildlife wing is also inadequate with little resources at their disposal. “The authorities must realise that wild animals are our national heritage,” he added.

When the sanctuary came up, the area of cultivated land was much less. Kulwant Singh, a forest guard, said that since the area is close to Rajasthan, it mainly comprised dunes and semiarid plains.

Gradually, the area of cultivated land increased with farmers producing wheat and fruits. Later, the farmers started fencing their lands to ward off stray cattle.

Two years ago, most of the farmers installed cobra wires (bladed-edged iron wire mesh) around their fields, which proved fatal for animals. “The farmers had to remove the cobra wires after the administration intervened, but the fields are still fenced with normal iron wires. They aren’t as fatal as cobra wires, but can still injuries animals,” Singh added.

Bishnoi, however, insists that the fields were fenced to prevent the entry of stray cattle, not blackbucks or blue bulls. “A proposal to set up another cattle pound has been gathering dust for the last several years. If the government shifts all stray cattle to a new pound, I am sure many of the farmers inside the sanctuary will remove their fences, allowing free movement of blackbucks,” he added.

Farmers don’t want to hurt wild animals, but they also have to feed their families and protect their livelihood, Bishnoi said. According to him, the government must come forward with a proper solution as people are ready to cooperate to save animals.

(Vivek Gupta is an independent Chandigarh-based journalist. The views expressed are personal.)

NGT comes to the rescue of Kashmir’s Doodh Ganga

@guptavivek83
Vivek Gupta is an independent journalist from Chandigarh. He has worked in several media outlets including The Hindustan Times, The Indian Express and The Tribune.