No Result
View All Result
in COVID-19 Labour Rights

In a letter to the CM, the CITU has pointed out that several big industries were fully functioning under some plea or other, risking lives of workers and society in general.

In a bid to control the spread of the virus and reduce the burden on the health system, the state government imposed a two-week ‘complete lockdown’ beginning May 10.

Essential services, continuous process industries and export production have been allowed to function during this period. However, most private sector industries are functioning, claiming to fall under one of these categories.

However, since thousands of people work under a single roof in these industries, some of those have already turned into COVID-19 super spreaders.

Expressing concern, A Soundararajan, state president of Centre of Indian Trade Unions (CITU), wrote a letter to Tamil Nadu Chief Minister saying that “besides public sector companies, almost all other industries are fully functioning. Lakhs of workers are travelling back and forth, and are working in crowded spaces, which goes against the intention of a lockdown. The factories have become spaces of disease and death.”

In the letter, he pointed out to the Chief Minister that “the exception that essential services may function during the lockdown is misused by factories… Many silly excuses are made to violate lockdown rules…”

“It is worrisome that they do not even follow the rule of operating factories with 50% workers,” said Soundararajan.

The CITU has urged the Chief Minister to implement the state lockdown strictly. It has demanded that other than medical related and other essential services, no industry is allowed to function during the lockdown. It also stressed on leave with pay for workers, both for permanent and contractual.

Tiruppur , a major textile hub in West Tamil Nadu, engaging lakhs of workers and contributing to 90% of India’s total cotton garment exports, too, continues to operate under the full lockdown, as it was brought under essential services by the previous government.

The letter read: “In each of these factories anywhere between 100 to 1,000 labourers work in close proximity. This means that the workers, their families and the society at large are in danger of contracting and spreading the disease.”

It pointed out that the COVID-19 sero-positivity rate in Tiruppur was 31.3% last week, while the overall average of the state is between 20 and 25%.

“To prevent people from the dangers of the disease, garment manufacture must be removed from the list of essential services in the state and full lockdown must be implemented in the district” said the trade unions.

In Tiruppur, more than three lakh workers are eligible claimants of the Employees State Insurance (ESI), but there aren’t enough medical facilities in the district to claim the insurance. So, the unions have urged the state to intervene and with ESI funds generate makeshift oxygen beds for the employees and their families.

On May 11, the Tiruppur District Collector called a meeting with the Tiruppur Exporters’ Association to discuss the surge in cases. Following the meeting, the Association released a statement taking into account the dire situation, which read “we are compelled to take a collective call for voluntary closing of our factories for the good and safety of our brothers and sisters of the society.” As of now, the factories have decided to shut from May 14 to 24.

Automobile factories in the suburbs of Chennai – Oragadam, Sriperumbudur and northern Chennai – are allowed to function with 100% workers because they fall under continuous process industries. With the increased spread of the COVID-19, workers of Hyundai, Renault Nissan, MRF, Ford, and other big factories, along with their family members, have contracted the infection. A few have even lost their lives. 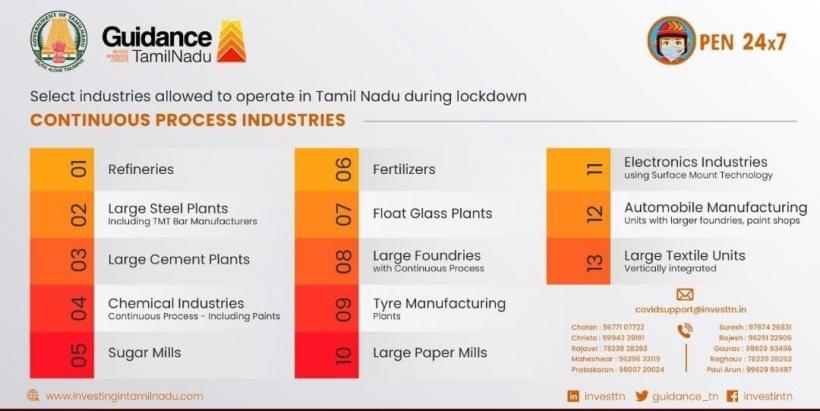 Trade unions in these factories have appealed to the state government to shut these factories, provide compensation for the families of the dead, give financial assistance to the infected and also paid leave.

MRF workers were initially demanding that the plant be run with 50% of the workforce. However, production at the plant came to a standstill on May 9 following the death of two workers.

Ford workers have taken up the struggle and are planning to write to the CM requesting that the factory be closed. To grab the attention of the state government and the Chief Minister, trade unions in Renault Nissan have also launched a Twitter campaign.

However, several auto factories have decided to partially close for maintenance or are trimming production. But, it is not with the intention to prevent COVID-19 spread, but to avoid inventory pile-up, because most of the sales markets across the country are already under lockdown.