No Result
View All Result
in Governance

SK Misra to continue as ED Director for one more year

The Central Government on Friday extended the tenure of Sanjay Kumar Mishra as Director, Enforcement Directorate (ED) for a year.

Mishra, an IRS officer was appointed as ED Director on November 17, 2019, for a fixed tenure of two years. His tenure as Director was coming to an end next week. The President has now modified the earlier order to the effect that the tenure will last for three years, which means one more year for Mishra. 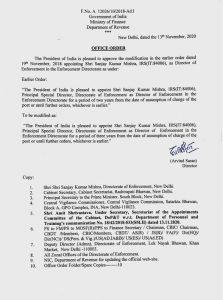 Mishra will be the first ED Director to serve for 3 years.

ED Director’s appointment is governed by the Central Vigilance Commission Act which provides that no person below the rank of Additional Secretary to the Government of India shall be eligible for appointment as a Director of Enforcement and the Director so appointed will continue to hold office for a period of not less than two years from the date on which he assumes office.

‘India must pass a law that specifically outlaws genocide, and provide for ways to implement that law’, says founder of Genocide Watch, Gregory H. Stanton