No Result
View All Result
in Judiciary Supreme Court

A Supreme Court order to evict over 10,000 households from Khori Gaon near the Surajkund area of Faridabad, Haryana will affect over one lakh people who have been living in the area for over 40 years.

The population in these households primarily consist of workers who have migrated from different states and have settled in the area to be able to find work in the Delhi NCR.

Most of these households do not have electricity or water supply. There are approximately five schools in the area which have also been ordered to be demolished.

The Supreme Court verdict has caused immense panic amongst the workers, most of whom are either out of work or are earning very less due to the pandemic. All of them are soon going to be rendered homeless and their future remains uncertain.

According to the Haryana Urban development Authority in 2010, rehabilitation shall be granted only to the people residing in Khori since 2003.

In response to these policies, a PIL was filed before the Punjab and Haryana High Court to extend rehabilitation for all workers living in the area. However despite several hearings, the High Court denied any relief  as the matter was still pending before the Supreme court.

In 2016, at a hearing before the Punjab and Haryana High Court, it was promised that the workers shall be provided with rehabilitation. However, this never happened and in 2017, this order was challenged by the Faridabad Municipal Corporation in the Supreme Court.

A Press Conference organised by the Bandhua Mukti Morcha was presided by Social Activist Medha Patkar, Senior Advocate Colin Gonsalves, Advocate Gunjan Singh, General Secretary of Bandhua Mukti Morcha- Nirmal Gorana and representatives of the workers living in Khori Gaon. They expressed their deep concern about the future of these workers and also condemned the treatment of the administration towards the poor workers.

Razia, a worker from Khori gaon said that if they were illegal land grabbers, so were were the affluent farm houses and restaurants in the area. Yet, only the poor were being singled out and treated like animals.

Medha Patkar said:“Is the cut off date only for the marginalised people and not for the privileged? Right to shelter that comes under Right to Life and Liberty under Article 21 of the Indian Constitution should at least be granted to each and every individual. Due to the ongoing pandemic, the displacement of people should be stopped. The people protesting against the eviction are not terrorists but social workers fighting under the constitutional machinery. It is suggested not to evict but provide rehabilitation to the people who once displaced would be deprived of any shelter.” 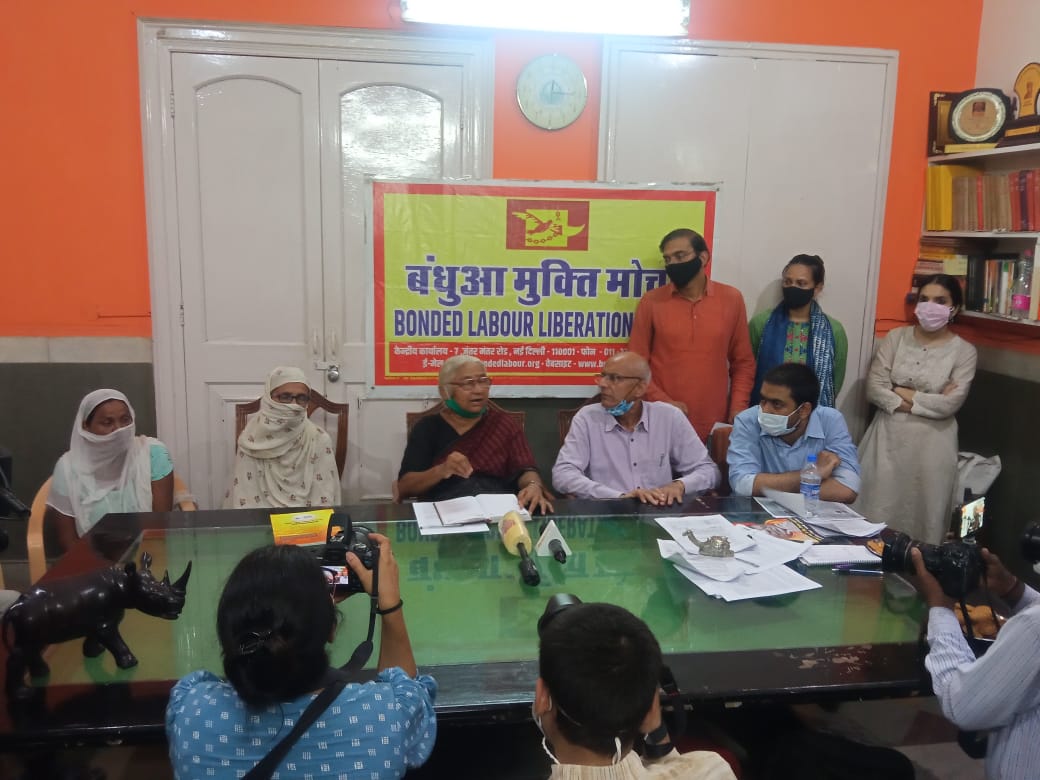 Advocate Gunjan Singh pointed out that some workers in Khori Gaon had committed suicide out of anxiety and fear of displacement.

In September 2020, more than 1700 houses in Khori Gaon were demolished by the Faridabad Municipal Corporation.

The Bandhua Mukti Morcha and Rashtriya Mazdoor Aawas Sangharsh Samiti carried out sit-in protests and demanded rehabilitation for these labourers.

On 2 April, 2021, over 300 houses were again demolished and an urgent application was moved before the Supreme Court seeking an immediate stay on these demolitions. However, the Supreme Court refused to stay the evictions and ordered that the demolition be completed within six weeks.

Naturally, these demolitions evoked protests by the workers against the Supreme Court order. However, the police responded to these protests with multiple arrests under allegedly false charges. General Secretary, Bandhua Mukti Morcha, Nirmal Gorana was arrested on 15 june when he visited Khori Gaon to assist the workers there and brief the residents about the Supreme Court Order. He was allegedly beaten and tortured while being repeatedly compelled to sign blank papers. An FIR has been registered against him under several sections of the Indian Penal Code and the Disaster Management Act including the offence of refusing to sign a statement.

Gorana was released on bail by the Faridabad Magistrate on 16 June.

Gorana said:  “Several labourers in the sit-in protests were manhandled by the police and were charged with multiple sections threatening to throw them behind bars. Had the people of these marginalised sections from rural spaces had some relief or opportunity in their areas, they would not have come to Khori and settled there. On behalf of labourers, I would like to appeal that if a labourer approaches the Supreme Court, it should reconsider its decision on the eviction order rather than staying adamant.”

A number of online campaigns were organised by various organisations for the rehabilitation of the Khori villagers. More than 20,000 tweets and 1500 emails were addressed to the District Commissioner, Municipal Corporation and the chief minister of Haryana.