Rinku Sharma Murder: No Due Process, No ‘Two Sides’ to the Story

It is unacceptable to cause harm or death. Where the rule of law prevails, the reasons behind any death—of a person of any religion—can not be allowed to remain a mystery. On the one hand, there is unprecedented communal polarisation that often results in violence, even death, and perpetrators escape the law. On the other hand, are the attempts to paint every conflict between a Hindu and a Muslim or any minority as a “communal” incident. Both poles are unjust and legally untenable, writes SIDDHARTH GANGULY.

ON February 10, Rinku Sharma, a resident of Mangolpuri in Outer Delhi was stabbed and murdered by a group of assailants. As reported by NDTV, five accused in the case, Nashruddin, Islam, Mehtab, Jahid, and Tajuddin were arrested and charged with murder by Delhi Police the following day.

According to the police, the incident began with a scuffle at a birthday party Rinku and the accused had attended that night. The victim and the accused knew each other as all of them had been living in the same locality for several years.

Media and netizens are divided over the story; some are sticking to the police version, others have opted to speak only of the religious angle. Contrasting accounts from the police and the victim’s family have buried the facts under communal hate. The echo chambers on Twitter are only further alienating citizens from each other.

The scuffle was termed by the police as a “business dispute”. The accused and a group of Rinku’s friends owned restaurants near each other. Both sides held each other responsible for their eateries shutting down. Their scuffle escalated beyond the birthday party. A mob followed Rinku home and the brutal murder took place subsequently.

The Outer Delhi Police detailed how it saw the incident in a series of tweets.

The victim’s family, however, made a different allegation.

Rinku was associated with the Bharatiya Janata Party (BJP) as well as the Rashtriya Swayamsevak Sangh (RSS) and the family alleged that this was the primary reason for his murder. 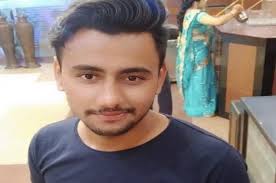 In a video interview, the victim’s brother, Manu, says that the accused had threatened him and his brother in August last year when the two had conducted a rally for the construction of the Ram temple in Ayodhya. Manu claimed he was an active member of the Bajrang Dal and said there had been no birthday party at all.

Rinku’s mother claimed that when the violence occurred, Rinku had been chanting “Jai Shri Ram” and the perpetrators took objection to that, apparently believing that the slogan was being shouted at them.

Despite the police stressing that all the parties involved were known to each other and that, “any other motive alluded to is wrong,” the family alleges that this was a crime of religion and has found support on the internet.

The hashtags #JusticeForRinkuSharma and #HinduLivesMatter quickly started trending on Twitter and a slew of handles used this case to accuse mainstream media outlets of “anti-Hindu” bias. The outrage took a singularly communal angle.

The victim’s family alleges Rinku was attacked due to his links with the right-wing ecosystem, while police say the cause was just an altercation. Twitterati, without waiting for more details from Police, is undermining the tragedy by insisting on religious discourse. The case shows how irreconcilable the differences between people are.

Despite the arrest of the perpetrators and the fact that the case is relatively recent, and despite the police’s clarification that the specifics of the case would be looked into, the narrative of a bias against Hindus raged on. The ongoing debate around the condition of Muslims and other minority communities in the country was used to signify, instead, that it is the Hindus who are being persecuted.

Instead of waiting for more facts or for the investigation to conclude, Twitter users sought only to turn the incident into an “us versus them” debate. This highlights the ideological divide that currently prevails in the country. The right and the rest cannot so much as converse with one another, because issues such as these devolve into finger-pointing and whataboutery.

There is no contesting that what happened was tragic and that clarity on the true motive behind Rinku’s murder must be obtained. However, for the internet’s right-wing ecosystem to claim victimhood, and complain that violence against minority communities is highlighted in India while when the victim belongs to the majority (Hindu) community, it is covered up, is missing the point.

The nation is divided. The differences between groups on opposing sides of the ideological spectrum are seen as so irreconcilable that Indians are no longer seen as a community as a whole. Until this prejudice and perceived victimhood are abandoned, the nation will continue to be a disjointed collection of communities, forever at each other’s throats.

(Siddharth Ganguly is a student at the Symbiosis Institute of Media and Communication and an intern at The Leaflet. The views expressed are personal.)