No Result
View All Result
in Opinion

THIS is the picture/image I have of Lord Ram during the years I grew up in Bombay, circa the 1980s. Despite being born and raised in a ‘Christian’ family, Lord Ram was a part of my upbringing.

Grew up watching Ramanand Sagar’s telly epic – ‘Ramayana’ on Doordarshan. The original run – not this Corona induced one. Regularly visited our local Ram Mandir with school friends. Read tales about him in comic books especially the incomparable Amar Chitra Katha. Lord Ram’s public images and posters used to exude a loving radiance, a benign smile, always ready to bless you. He was the dutiful son, loving husband, caring brother and an ideal king. In short, the complete package.

‘Jai Shri Ram’ then wasn’t a war cry that you let out when you wanted to heckle someone or worse, lynch someone. It was a genuine polite loving tribute to Ram.

Then something tragic happened. They changed my Ram. I was barely into my early teens when the Ram- Janambhoomi-Babri Masjid movement erupted in its full communal and violent force.

Lal Krishna Advani modified a Toyota minibus into an air-conditioned “Rath” (Chariot) and commenced his ‘Rath Yatra’ from Somnath to Ayodhya in the autumn of 1990, ostensibly for the construction of a grand Ram Temple at Ayodhya (the birthplace of Lord Ram). And with it, the public images of Ram underwent a stunning transformation. They would never be the same again. 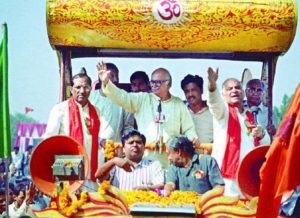 Ram became Rambo. Rippling muscles. Aggressive Posture. An ominous arrow, arching back at full tensile tilt from the bow, a quiver full of arrows, ready to strike at the “enemy”. In those communally surcharged times, even someone in early teens, like me, could guess who the “enemy” was.

He was no longer accompanied by Sita, Lakshman and a devoted Hanuman at his feet.  He was no longer a ‘family man’ but a warrior. Out to correct historical wrongs. Out to get a temple built for himself. An electoral mascot. A campaign poster boy used to peddle hate and provoke fear. 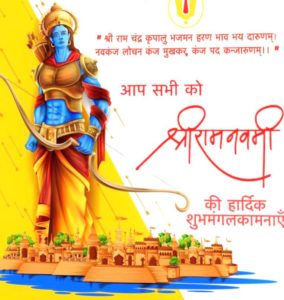 Those of you who grew up in the 1990s and thereafter – this is an unfortunate image of Lord Ram that you would have grown up with. Why Lord Ram – even Hanuman has witnessed a visceral transformation. He is no longer the devoted bhakta at Ram’s feet. He is angry now. Very angry, presumably at all the historical wrongs done to the Hindus. He now glares at you from the backscreen of Ola and Uber taxis in his Rudra-Avataar! 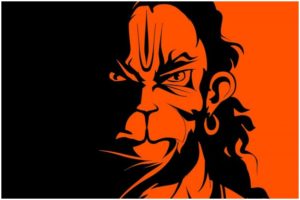 What transpired post-Rath Yatra is common knowledge and doesn’t need any iteration here. But undeniably in the last three decades, we have certainly lost the essence of Ram.

You need not worship Ram as a ‘God’ to love him. You love him, respect him for the values that he represents. He is a part of our cultural ethos since time immemorial. The legend of Ram was born in this very country. My country. His value system has become indelibly and immutably ingrained in our Indian values. His life is a guiding light for all Indians, irrespective of religious affiliations.

What is lost in this communal cacophony is that Ram Rajya did not mean a Hindutva Raj? Ram Rajya was meant to embody Ram himself, a democratic system of governance, where there is equality for all, where no one is oppressed or discriminated and everyone in the kingdom is happy.  Total lack of hate and an overwhelming sense of compassion towards all especially, the weak and the downtrodden.  This is the ideal the modern Indian state and its leaders must strive to attain.

Lord Ram’s ‘Vanar Sena’/army which defeated Ravan in the battle at Lanka, is a metaphor for the wholehearted acceptance of the downtrodden and the backward by the God-incarnate himself.

Shabari was a tribal woman and had to endure an agonizing wait to meet her Lord Ram. The story of her “berries” again has to be understood metaphorically, Lord Ram gladly accepted the berries from Shabari, which may not have been fit for human consumption let alone by a God-incarnate, solely because they were offerings of genuine love and sincere devotion.

Then we have Devi Ahilya’s legend, Lord Ram ended her sufferings and set right the wrongs committed on her by a patriarchal society.

All these episodes of Lord Ram’s life are inspirational metaphors. If the God-incarnate never discriminated anyone and loved them all, then how can his true followers discriminate, hate and kill in his name?

The years that he sat on the throne, post his return from exile, are considered as the gold standard for good governance. In fact, when Gandhiji, a devout Hindu himself, talked of ‘Ram Rajya’ as the template of governance for the modern Indian state post-1947, he wasn’t talking of a majoritarian Hindutva type state, where minorities would be rendered second class citizens living under perpetual fear of their rights and life under a virulent form of Hinduism.

I daresay that “Ram Rajya” provides the foundational essence of the modern Indian State. It is the ‘spiritual basic structure’ of our Constitution.

I am an atheist. Even so, I refuse to let Ram be appropriated by the Hindutva brigade. It is time to reclaim him. Ram belongs to every Indian, irrespective of faith and birth. Let’s restore him to what he actually stands for – Love, Compassion, Equality, Duty and an absolute lack of hate.

Note: This is an opinion piece, and the views expressed are the author’s own.

Right to offend and hurt: Distinguishing between objectionability and illegality | Part II