No Result
View All Result
in Analysis Farmers Rights Policy

Meeting of farmers’ and workers’ organisations, along with students, youth, women, employees and pensioners’ associations, held to chalk out strategies on the ongoing movement against three farm laws.

Preparing for the long haul, farmers’ and workers’ organisations, along with students, youth, women, employees and pensioners’ associations, on Saturday floated ‘Punjab for Farmers’ for close coordination and chalking out strategies on the ongoing movement against three farm laws.

The organisations were invited by the Samyukta Kisan Morcha – a collective of farmers’ unions- in view of the upcoming harvesting season which is considered critical for the movement as farmers’ appeared to be returning with trolleys to the villages.

Speaking in a jam-packed conference hall at Punjab Agriculture University, Ludhiana, Darshan Pal from Krantikari Kisan Union, said: “I have no doubt in accepting that the harvesting season is going to be challenging for us. We will be approaching the harvesting season in four-five days and it is obvious that the people will return to farms for a brief period and their numbers will decrease at the borders. This does not mean that they no longer support the movement. We called this meeting to strategise the participation. Second, this is no longer a farmers’ movement alone. It’s a people movement. Through this meet, we want to make the movement deeply grassrooted. The number of participants here exceeded our expectation. In next meeting, we will chalking out which organisation will mobilise people on given days. The next meeting is scheduled for April 7 in Jalandhar.”

When asked for comments on taking up workers’ issues more aggressively, Pal said: “It’s an age old issue here in Punjab. We have taken up the issues and succeeded in forcing the lapse of the labour codes. The movement is only four months’ old. We will see how to go further with it.”

Balbeer Singh Rajewal from Bharatiya Kisan Union Rajewal said the meeting exhibited the unity of different organisations in Punjab, who are not at all perturbed by dubious daily orders of the Centre. The veteran farmers’ leader was referring to the latest order of Food Corporation of India (FCI) which asked for land records from farmers to enable direct payment to them.

Farmers’ organisations have opposed the FCI order stating that it excludes the sharecroppers, who constitute 40% of the total population of farmers in the state.

Rajewal said the aim of Saturday’s meeting was to bring together non-farmers organisations.

He said as far as the FCI order is concerned, it is practically impossible to produce such land records because the families have not partitioned their land since three generations. Millions of cases are languishing in the courts to decide the ownership of land. Even in Haryana, where the scheme was launched earlier, it could not be properly implemented.

Second, how would sharecroppers produce such records, as they have been taking land on rent for farming? 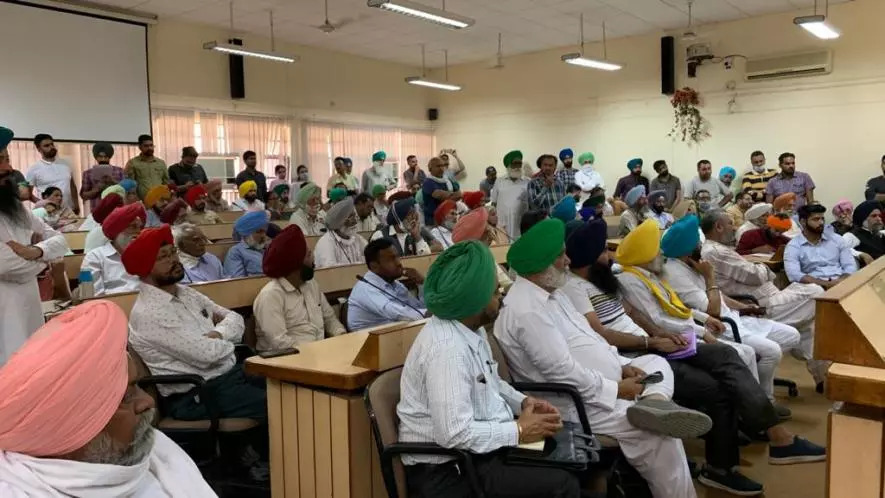 “FCI is not only running away from their responsibilities of procuring the produce. Indeed, it is ploy to disband the FCI. If it is dismantled, who will procure produce to be later distributed under the public distribution system to the poor. They will simply die!”, Rajewal said.

Importantly, the farmers’ unions have decided to march to Parliament on foot in first fortnight to press the government to repeal the laws.

In a separate development, several farmers were injured in Rohtak when they were protesting the visit of Haryana Chief Minister Manohar Lal Khattar. The farmers’ organisations had decided to wave black flags at BJP legislators.

In a statement, Inderjit Singh of SKM, said: “The farmers, enraged by the highly disparaging remarks made during farmers’ agitation by BJP leaders, had assembled to peacefully show black flags to the Chief Minister whose chopper was supposed to land at Asthal Bohar. Even women protesters were manhandled by the male cops. Some protesters have received grievous injuries.”

He said BJP-JJP ruling alliance was increasingly getting isolated due to its anti-people policies. The enactment of recovery of damage to property Act in Haryana is also intended to curb the right to protest guaranteed by Constitution, he said, adding that SKM is demanding a negotiated settlement of farmers’ demands by the BJP government, instead of waging a war against the people who had given it the power.”

(This article was first published by Newsclick. )

It cannot be said that Parliament was unmindful of the rights of the wife, counsel tells Delhi HC seeking to retain marital rape exception