A little known form of protest, hunger strike to protest the arrest of Anand Teltumbde and Gautam Nvalakha from Punjab

A one-day hunger strike was observed on Tuesday by workers of various pro-people, democratic and mass organizations of the state from their respective homes. This call was given by All India Forum on Right to Education(AIFRTE) During the ongoing pandemic, when it can be fatal to venture out of homes, hundreds of activists participated in this day-long protest.

This 7 A.M to 6 P.M hunger strike was to protest against the Supreme Court orders asking eminent educationist and intellectual of Dalit affairs Professor Anand Teltumbde and a very famous activist of the country Gautam Navlakha who is well- known for espousing democratic rights of poor and downtrodden for last decades. The Supreme Court has ordered them to present themselves April 14, 2020, before the court which they did. 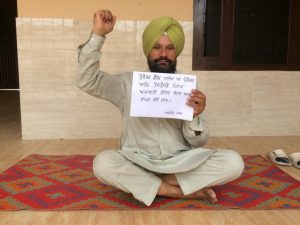 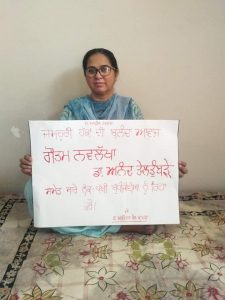 Leaders of Forum (AIFRTE)  Mr Narbhinder and Kanwaljeet Khanna told that members of AFDR, Punjab, Inqlabi Kender Punjab, DTF Punjab, PSU, CDRO, Medical Students Union, All India People’s Forum and BKU (Dakaunda) participated in this statewide day-long protest. The activists in Punjab were opposing their arrest, that too on the birth anniversary of Dalit icon Bhim Rao Ambedkar. Teltumbde, who is married to Ambedkar’s grand-daughter, surrended in Mumbai and Navalakha in Delhi. Both were arrested under the unlawful activities (prevention) ACT (UAPA) 1967. Apart from these two, nine other activists are already arrested in the case. ”By doing so” the union govt. has clearly shown that it allows no room for dissenting voices.

During the countrywide day-long protest, it was pointed out that by charging these eminent personalities under draconian anti-national sections of IPC  and the UAPA 1967  linking them to Bhima Koregaon case, the Judiciary of the country has let us down.

The protesting leaders said that the Government of India is trying to muzzle every democratic voice by involving him or her in false draconian legal cases. Already about a dozen of pro-people intellectuals and activists are languishing in jails charged under well thought out and politically motivated plan. 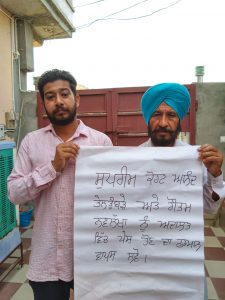 The convener of the Forum Professor Jagmohan Singh stated that arrest of Professor Anand Teltumbde, a close relative of the architect of our constitution Doctor B. R Ambedkar, and Gautam Navlakha shows that during this era, the inclusion of democratic rights in the constitution, like that of expression of thought etc, are of no consequences. He said that legal proceedings against the intellectuals, put behind bars for the last two years, are being delayed deliberately on one pretext or the other. He wondered that while other jail inmates are being released in view of prevailing pandemic conditions, the students of Jamia Millia Islamia are being arrested to teach them a lesson for participating in anti CAA protests. 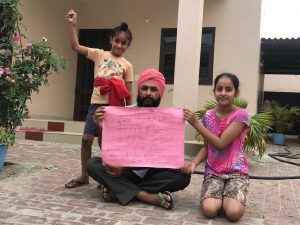 The AFDR representative added. the activists holding handwritten placards in Punjabi and English, posted their photos on social media to lodge their protest. CPI(ML)liberation state spokesperson Sukhdarshan Nutt and Desh Bhagat Yaadgar committee member Amolak Singh said the Narendra Modi led union government was acting against anyone raising voice against it. Activist and writer Arundhati Roy, leader from Gujrat Jignesh Mevani and left leader D Raja has condemned the arrest of these two, All India Progressive Writers Association and Kendari Punjabi Lekhak Sabha has demanded release both of the leaders immediately. 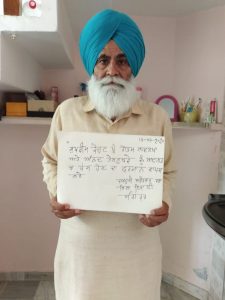 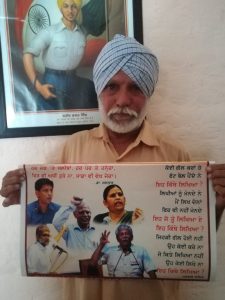 A day after the commemoration of the Jallianwala Bagh massacre of innocents protesting the draconian Rowlatt Act in 1919, the unconstitutional UAPA has again been used in `free’ India to imprison innocent persons without trial virtually indefinitely. In these days of complete Coronavirus lockdowns all over the country, when even convicted criminals are being released on parole for fear of triggering a virus spread, the Solicitor-General claimed for the prosecution in the Supreme Court that the `safest place’ for them was in jail hence they should be denied anticipatory bail.

Since the past two weeks, lakhs of people, both individuals and organizations, from across the world have rejected the trumped-up charges against Teltumbde and Gautam Navlakha through petitions to the President, the CJI and even the Prime Minister and Home Minister, through twitter storms, the hashtag `Stand with Anand Teltumbde’ campaigns and hunger strikes. They have gathered in virtual space and ensured that their opposition to the disgraceful arrests by the State is mobilised and heard loudly and clearly. A large number of people from across the nation read the preamble of the Indian constitution in different languages and shared their videos/photos on social media.

Gautam Navlakha wrote an open letter to the people of India and described what kind of person he was and how this kafkaesque regime is working. Summing up his letter he quoted Bob Marley’s song:

“wo’nt you help to sing

these songs of freedom

‘cause all I ever have

These songs of freedom”

305 attacks on Christians in Indian in first nine months of 2021, only 30 FIRs: fact-finding report

Identification of accused by witness who saw him for first time during crime weak evidence: SC