In a shocking case, a private school in Srinagar, which got 12 acres of government land, has refused to answer an RTI query regarding admissions saying it does not fall within the definition of Public Authority as defined under Section 2 (h) of RTI Act 2005. While the estimated market value of the land under lease with the School is more than Rs 400 crore, its annual lease rent to the government is just Rs 12,000.  If this is the case, how can the school administration claim that it is not answerable under the RTI Act while taxpayers’ money is being utilised by them, asks RAJA MUZAFFAR BHAT reporting from Srinagar.

RECENTLY, a top private school in Kashmir while responding to the chief education officer, Srinagar, said it was not obliged to provide information under the Right to Information Act (RTI) as the institution didn’t fall within the definition of public authority.

Pertinently, the school is located in Srinagar’s post-Rajbagh locality with over 12 acres of government land having been leased out to its management decades back for a meagre annual rent of Rs 12,000 only.

The denial of information under the RTI Act to Dr. Riyaz Daga, a physician, has generated debate among legal and social circles. Daga filed two RTI applications to get information from the school authorities about students admitted in LKG session 2020-21.  His daughter, Zainab, was denied admission to LKG despite her sibling being a student of the same school.

Background of the case

Dr Riyaz Daga sought admission for Zainab in Presentation Convent School, Rajbagh. The checklist for admission prepared by the school management had laid down certain eligibility criteria. Though some of it sounded anti-poor and unprincipled, Daga fulfilled them. This included the educational and financial status of the parents, area of residence and siblings studying in the same school.

Following the denial of admission to his daughter, Daga wrote to the school principal, explaining his point of view. He said he was a physician, besides being a noted social activist in the field of healthcare.

The letter reads: “The mother of the ward is a Post Graduate in Mathematics with B-ed who voluntarily works as a community teacher. The elder sister of the ward namely Mahira Riyaz is a bright student studying in class 3rd -D in the same institution, which is a positive point for the ward to seek admission. That the parents of the ward are residing in the heart of Srinagar city (Qamarwari area) and thus live within the catchment area which is one of the important parameters for admission. That the denial of admission to the ward is totally unjust and unwarranted as the authorities of the institution have flouted the said criteria themselves by granting admission to non-deserving wards who neither belong to the catchment area nor their parents are so much qualified and nor have any sibling admitted in the school.”

When there was no response from the school authorities, Daga filed an RTI before the Principal, Presentation Convent School, Srinagar and Directorate of School Education, Kashmir. Daga told The Leaflet: “I knew that the school authorities wouldn’t respond to my RTI application. That is why I filed another application before the Directorate of School Education, Kashmir, on February 27, 2021, with the aim that they would direct the school to provide information on my application.”

Technically, the PIO in the Directorate of School Education, Kashmir, who is also the officer on special duty (OSD) there, should have written to the principal.

The officer put the ball in the CEO’s court. This violates the RTI Act. On April 1, 2021, the CEO sent an official communication (No: CEO/SGR/RTI/Estt/2535-36) to Daga, which contained a letter from Presentation Convent School. The school authorities said they couldn’t provide any information as the school was not a public authority. The letter read: “With due respect, it is submitted that Presentation Convent Higher Secondary School, being a private unaided institution does not fall within the definition of Public Authority as defined under section 2 (h) of RTI Act 2005. Therefore, the school was not obligated to provide any information to the applicant.”

The aggrieved father has now moved the Central Information Commission (CIC) and filed an appeal to it. Daga is hopeful he will get justice, but he will have to wait for his case to be listed as there is a huge workload before the CIC, Delhi.

Incidentally, before the abrogation of Article 370, J&K had its own RTI Act (J&K RTI Act 2009) and dedicated State Information Commission (SIC) where RTI appeals would be disposed of within 60 days. There is no such provision in the central Act (RTI Act 2005).

Appeals from J&K filed in the CIC more than six months back haven’t even been listed for the first hearing till date. The aggrieved has also sought legal intervention from a Srinagar court where the case is listed next week before the chief judicial magistrate, Srinagar.

The applicant didn’t seek any ambiguous information. After going through Daga’s RTI application, I found that he had sought information that should actually have been given by the school authorities. He sought details of all the students who were admitted in LKG batch 2020-21 along with their name, parentage, academic qualification of parents, residence and monthly income. He also sought details of those admitted students whose siblings were studying in the same school and the checklist prepared by the school which contains certain points that have weightage during the admission process.

It was alleged that many students who were admitted didn’t fulfill the criteria laid down by the school such as preference for local residents of Srinagar, higher educational qualification of parents and sibling studying in the same school.

Syed Nassarullah, a legal expert, told The Leaflet: “The schools give lessons on ethics and morality to students. Issues like good governance and transparency are taught, but when the school itself is not transparent in revealing the details of admitted students, what moral authority does the school management have to give lectures on these topics? Even if the school is not a public authority, it should still be open and accountable to parents or any other person.”

It is a known fact that Presentation Convent was allotted 90 kanals of government land (approx 12 acres) where its campus is located. The allotment was done more than 70 years back. There are other private schools in Srinagar that too were allotted huge tracts of land by the government.

The income of Presentation Convent is huge, but the annual lease rent paid by its management to the government is just Rs 12,000. If this is the case, how can the school administration claim that it is not answerable under the RTI Act while taxpayers’ money is being utilised by them? The details about the Rs 12,000 annual rent was revealed through an RTI in 2013 when a Srinagar-based social activist, Umaan Umar, sought details from the district administration of Srinagar through the assistant commissioner, revenue (Nazool Wing).

Speaking to The Leaflet, Umaan Umar said: “The estimated market value of the land under lease with Presentation Convent School in Rajbagh area of Srinagar is more than Rs 400 crore. How can the school management deposit just Rs 12,000 as annual rent to the government? This makes it clear that the school is a public authority. We don’t know whether the rent has been enhanced or not as the lease agreement was expiring in 2017.”

The Supreme Court on September 17, 2019, in the case of DAV College Trust &Management Society V/S Director of Public Instructions had held that non-governmental organisations substantially financed, whether directly or indirectly, fall within the ambit of “public authority” as defined under Section 2 (h) of RTI Act 2005.

Section 2 (h) says: “Public Authority” means any authority or body or institution of self government established or constituted—

A Supreme Court bench of Justices Deepak Gupta and Aniruddha Bose said: “If NGOs or other bodies get substantial finance from the government, we find no reason why any citizen cannot ask for information on whether his or her money, which has been given to an NGO or any other body, is being used for the requisite purpose or not.” The judgment came in a case involving the DAV College Trust, which had argued that it does not come under “Public Authority” and hence, does not attract RTI.

The SC order further read: “In our view, ‘substantial’ means a large portion. It does not necessarily have to mean a major portion or more than 50%. No hard and fast rule can be laid down in this regard. Substantial financing can be both direct or indirect. To give an example, if a land in a city is given free of cost or on heavy discount to hospitals, educational institutions or such other body, this in itself could also be substantial financing. The very establishment of such an institution, if it is dependent on the largesse of the State in getting the land at a cheap price, would mean that it is substantially financed. Merely because financial contribution of the State comes down during the actual funding, will not by itself mean that the indirect finance given is not to be taken into consideration. The value of the land will have to be evaluated not only on the date of allotment but even on the date when the question arises as to whether the said body or NGO is substantially financed.” 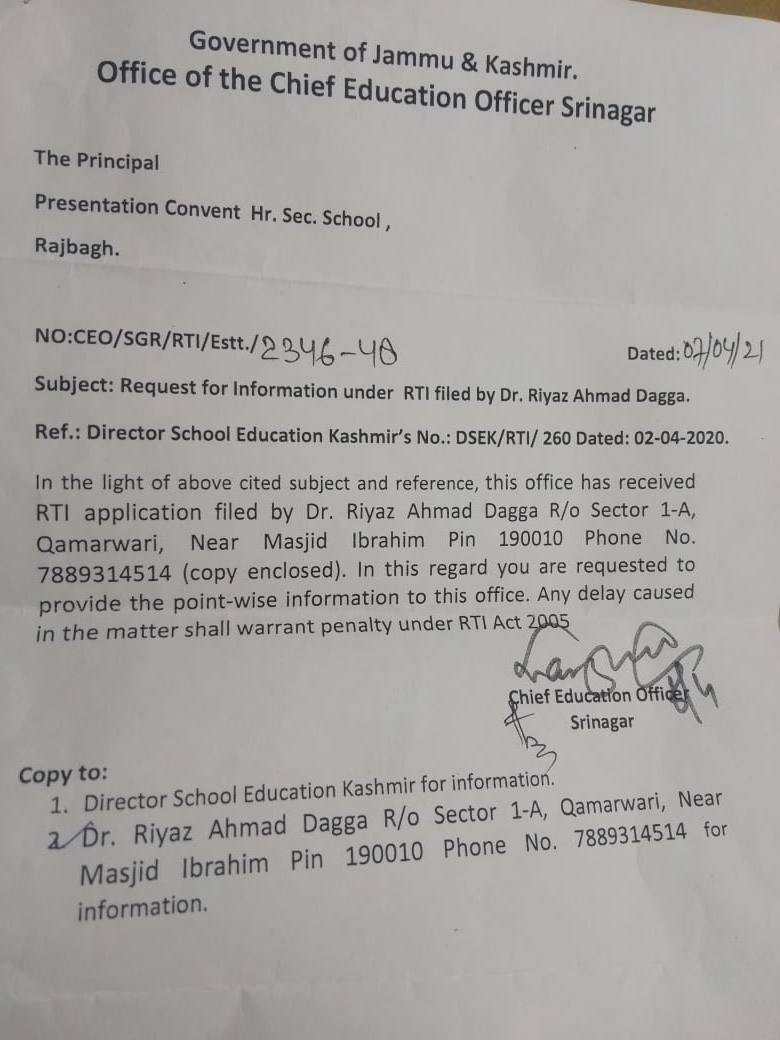 Presentation Convent School, Srinagar, along with other missionary schools in Kashmir, have a rich history. I don’t want to undermine their role in the field of education, especially providing quality education to thousands of Kashmiris for more than 80 years.

With the passage of time, greed for money has overpowered the management of these schools, like other private schools, colleges and universities.

The missionary zeal is often missing. School managements of private education institutions need to be guided by the spirit of transparency which will force them to operate ethically.

It is observed that whenever students or their parents seek information from a private school, college or university, the management quickly claims it is exempted from providing the same as RTI isn’t applicable to them. This is both wrong and unethical and needs to be rectified.

(Raja Muzaffar Bhat is a Srinagar-based activist, columnist and independent researcher. He is an Acumen India fellow. The views expressed are personal.)

Limitations of the domestic apparatus: considering the vocabulary and practice of international human rights law in Kashmir