Over 64 % of Accused under Excise Laws are SC/ST, Nomadic Tribes in MP: Report

Among 540 FIRs, over 73% were pertaining to desi liquor involving alcohol within the 1–10 litre range, the report says.

Tulsiram Kanjar (29) and Ummead Singh Kanjar (45), who belong to the nomadic tribe from Madhya Pradesh’s Guna district, were called to the Chief Minister’s event on August 31 to take part in the Vimukta Jati Sammelan 2021. When they returned home, both were booked under section 34 (2) of MP Excise Act 1915 for illegally possessing litres of raw liquor (Kacchi Sharab) inside their houses at Saukanya village of the district.

Tulsiram was one of the 10 guests from Guna district invited at the Chief Minister’s House in state capital Bhopal to take part in the Sammelan while Ummead Singh was called by the Guna Collector for the same. 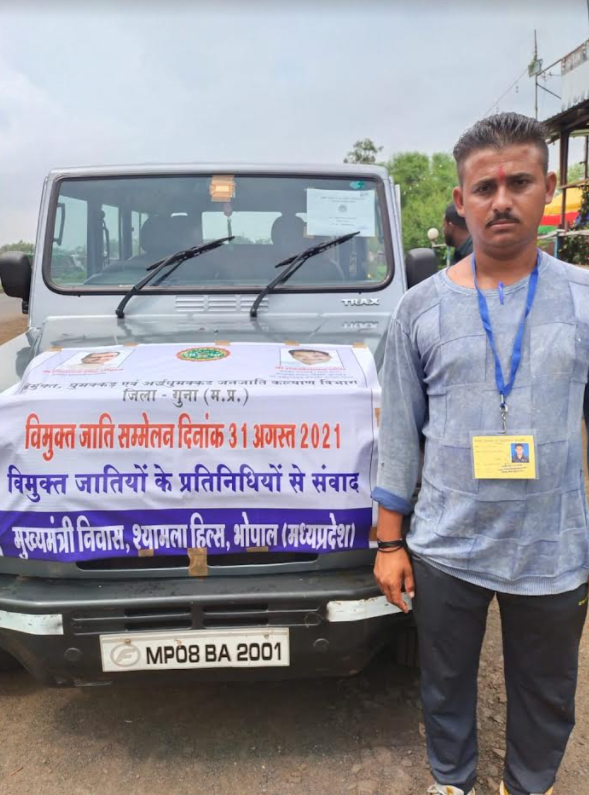 According to police FIRs, 80 litres of “kacchi sharab” was found at Tulsiram’s house and 35 litres from Ummead’s house. They were charged under section 34 (2) (Unlawful manufacture, transport, possession, sale of liquor) which can attract imprisonment for a term extending to one year and a fine of five thousand rupees.

Speaking to Newsclick over the phone, both the accused alleged that the police were trying to frame them in false cases over personal vendetta. “The town inspector of the Raghogarh police station, Vinod Chhavi of Guna district holds a personal grudge against us as we have lodged a bribery case against him and reported it to the CM’s helpline a few months back,” said Tulsiram.

Tulsiram’s brother Rohit Kanjar (25) is the witness in the bribery case and Ummed is the complainant. 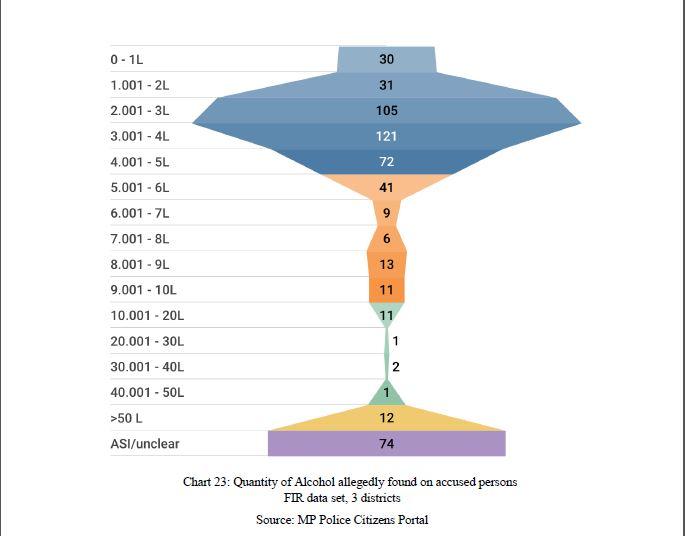 “He was forcing us to withdraw the complaint else we will be framed,” Tulsiram added.

Guna SP Rajeev Kumar Mishra, however, brushed aside their allegations. He said, “After cases of death owing to hooch surged in the State, the police are vigilant and raiding those areas where such alcohols were prepared. On August 31, cops raided their village and booked seven people for possessing illegal liquor including Tulsiram and Ummed.”

“Police don’t catch the real culprits,” alleged the 19-year-old son of Ummead Singh who is preparing for competitive examinations and has been living in Guna town for the last three years with his uncle. “Our families have farm lands and we grow crops and have nothing to do with illegal liquor making. We are being framed.”

Terming it a fake case, both the accused have written to the Guna Superintendent of police against the police action and demanded a fair investigation.

According to a recent study by Bhopal-based Criminal Justice and Police Accountability (CPA) Project, over 64% of cases registered under the Excise Act 1915 between January 1 2018 to December 31, 2020 in three districts — Bhopal, Jabalpur and Betul — are against people from Schedule Castes, Schedule Tribes and nomadic and semi-nomadic tribes.

Excise Acts are legal instruments used in India to regulate manufacturing, transfer, and possession of alcohol. 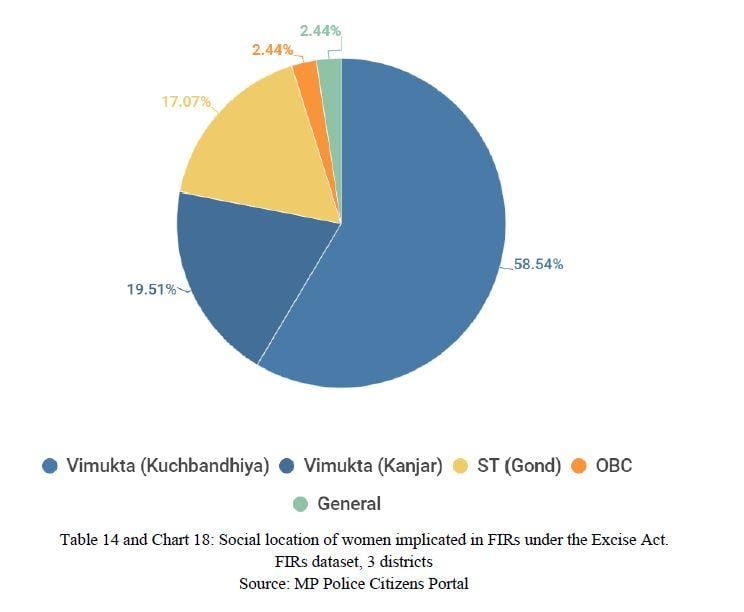 In Madhya Pradesh, this happens within the framework of the MP Excise Act, 1915. The law does not criminalise public drinking but a significant number of arrests for public drinking are wrongfully made under the Excise Act can result in imprisonment and fine. The Act also has special provisions to regulate the Mahua liquor which is commonly made and consumed by Adivasi populations.

The report further reveals that of 540 FIR, 33% are related to Mahua sharab. Majority of individuals accused under the Act are not big liquor mafias but individuals carrying small bags of desi alcohol from marginalised communities. The study also shows that in 25% cases of mahua liquor, the accused were found in homes or other private spaces, leading to over criminalisation of the Adivasi personal space.

“The study of FIRs reveals that the colonial Excise Law – 1915 has failed to stop the established liquor mafias in the state but it’s being used to target members of schedule caste, schedule tribe, nomadic and semi-nomadic tribes who make their traditional liquor (Mahua) in small quantities,” said Nikita Sonavane, Co-Founder of the CPA Project and lawyer. 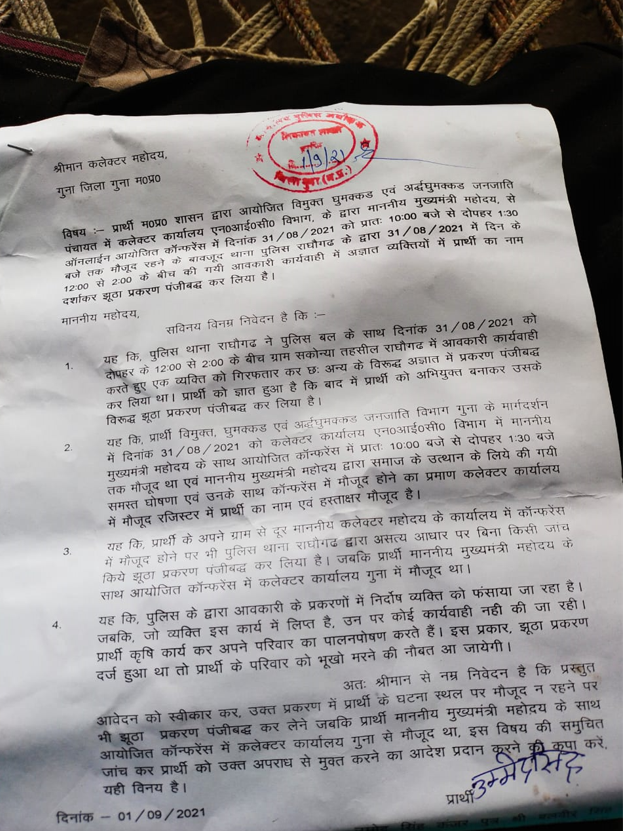 National Crime Records Bureau’s (NCRB) ‘Crimes in India’ report shows that Madhya Pradesh is just next to Tamil Nadu and Gujarat as far as specific offences related to alcohol are concerned.

It also reveals a pattern of Police FIR–cops always raid the area on tip off and the eyewitness during the seizure is common in every second and third case.

Activist and journalist Dayamani Barla said, “Members of Dalit and Adivasi communities produce and consume mahua in small quantities. They use it as medicine to prevent heat stroke while working in the fields. They use it in festivals. The commercialisation of alcohol is not done by them, but by liquor barons and mafias. They manufacture it in bulk as an intoxicant, and the government gives them a license for it. They, who have been driven out of our lands and forests, sell 3-4 litres of liquor on the streets due to poverty and oppression, but are criminalised and persecuted under the Excise Act. Is the Excise law ever applied to these barons? That is the more important question.”

During the first COVID-19 lockdown (March 22- May 31, 2020), excise related offences contributed to one sixth of all arrests in Madhya Pradesh, an analysis by the CPA Project has revealed.

After the deaths of over 50 people owing to illicit liquor in last six months in districts like Ujjain, Mandsaur and Morena, Madhya Pradesh cabinet on August 3, 2021 passed the amendment in Madhya Pradesh Excise (Amendment) Bill, 2021 which has provision for life imprisonment or death penalty and a minimum fine of Rs 20 lakh for the accused if a person dies due to the consumption of spurious liquor.

The amendment bill provides for imprisonment of a minimum of two years and a maximum of eight years besides a fine of up to Rs two lakh for the first time and a minimum of 10 years and a maximum of 14 years imprisonment and minimum fine up to Rs.10 lakh for the second time for physical damage caused by consumption of adulterated liquor unfit for human use.

The experts, lawyers and activists, however, criticised the state government for introducing the new changes in the law without any consultation.

“How the can state government amend and introduce capital punishment and excessive penalty up to 20 lakh in the Excise Act without consultation and discussion?” asked Nikita Sonavane.

“It’s true that we need to change colonial laws and bring new amendments to stop the illegal liquor mafia, but instead of doing this, the government just amended a few sections and introduced capital punishment. It’s worrisome,” she lamented.

Commenting on it, Santosh Kuchbandhiya, activist working for the Nomadic tribes said, “The report proves that the Excise law is majorly targeting the marginalised class and in majority of the cases (73%) people were found in possession of 1 to 10 liters of mahua which is inherit in their (ST/ST and nomadic tribes) cultures.”

The amendments were made in the backdrop of the deaths that took place in the last six months owing to hooch purchased from government licensed shops, claimed Santosh. “The deceased had not consumed mahua but hooch from the government shop, which led to their death.”

He further said, “We make liquors in small quantities for our own purpose but the police raid the homes and frame us in the cases of having illegal liquor in possession. The amendment will negatively impact the already suppressed SCs, STs and Nomadic community.”

Shivani, a social activist working for nomadic and semi-nomadic tribes, said, “Tribals and nomadic tribes were dependant on forests but with the introduction of the Wildlife Protection Act, they were forced to leave the jungles. The only thing they have left to make a living is manufacturing mahua through natural process. But the law enforcement agencies arrest a few gallons of Mahua and brand it like a big action against the liquor mafia.”

“Many like Tusliram and Ummead Singh Kanjar suffer every day in name of action against liquor mafia. Although, it’s a matter of invading their culture, which is protected by the constitution,” Shivani added.