No Result
View All Result
in Opinion Right to Information

From refusing to disclose property details of civil servants or the number of Ujjwala beneficiaries, public information officers are misusing Section 8 of the RTI Act, which exempts disclosure of personal information that would cause unwarranted invasion of the privacy of the individual unless it is in the larger public interest, writes RAJA MUZAFFAR BHAT reporting from Srinagar.

ANY personal information not related to any public activity or interest or which can invade the privacy of an individual cannot be disclosed in response to a Right to Information (RTI) application unless the Central public information officer (CPIO) or the state PIO is satisfied that the larger public interest justifies the disclosure of such information.

In a recent judgement, the Delhi High Court (HC) too mentioned Section 8(1)(j) of the RTI Act, 2005, which bars making such information public unless it is in the larger public interest.

A Division Bench of Chief Justice DN Patel and Justice Jyoti Singh dismissed an appeal related to an RTI application seeking the names of fathers and addresses of the appointees to the multitasking staff of the Rashtrapati Bhawan.

The Bench observed: “The release of this information will cause an unwarranted invasion of the privacy of the individuals. No larger public interest justifies the disclosure of residential addresses of the selected candidates as well as their fathers’ names.”

Background of the case

After he was denied the information despite filing the first and second appeal before the first appellate authority (FAA) at the Rashtrapati Bhavan and the Central Information Commission respectively, Kishan moved the HC. But he didn’t mention that his daughter had also applied for the vacancies.

When the court discovered the deliberate omission of this information, it dismissed his petition and imposed a cost of Rs 25,000 to be paid to the High Court of Delhi (Middle Income Group) Legal Aid Society.

Unfortunately, the state PIOs, FAAs or even information commissions misinterpret Section 8(1)(g) of RTI Act, which exempts disclosure of information that “would endanger the life or physical safety of any person or identify the source of information or assistance given in confidence for law enforcement or security purposes”.

Some IAS/KAS officers (third party) even gave in writing that they won’t make their property statements public fearing the law and order situation in the state. One of the bureaucrats in his response said: “We are field officers and due to the prevailing law and order situation, our property, at times, becomes the target of attacks. Sharing such information without any cogent reason or a specific purpose is against the mandate of law and the purpose of the Act. Once this information is shared, there is every apprehension that the properties of officers will get targeted due to law and order problems.”

Another officer said that children of high-profile private sector executives had been kidnapped for ransom in several cases reported across the country. “Even some private-sector employees drawing huge salaries also expressed their reservations to the media regarding disclosure of their income as it has security implications. The security situation in J&K continues to be fragile and the majority of employees do not have security cover, especially for their families.”

Disposing of the author’s complaint against the GAD in September 2011, the erstwhile J&K State Information Commission, headed by the-then chief information commissioner GR Sufi, said: “The Commission holds that they [GAD] should hoist such immovable property details of officers which are owned and acquired by them out of their sources of income on government websites.”

However, Sufi said that assets owned by the family members of the officers or their spouses out of their sources of income and ‘Stree Dhan’ need not to hoisted on these websites.

Setting aside the objection of some KAS officers who had cited the security scenario in J&K, the commission said that “the commission is constrained to observe that there is no express prohibition in the Act in this regard”.

The commission further noted: “Worthy IAS officers are at times performing more important functions and responsibilities concerning law and order and security problems and they are obviously in senior positions than KAS officers. However, the Commission is also conscious of the fact that the IAS officers have hoisted only immovable property returns under All India and Central Services Rules. On the principle of equity, the same principle should be applied to the KAS officers.”

In 2015, the apex court observed that income tax returns, assets, liabilities, official orders and performance records of public officers are personal information and can be exempted under Section 8(1)(j).

Recently, RTI activist Mohammad Mudaser, from Nagam, J&K, filed an application seeking the list of Pradhan Mantri UjjwalaYojna beneficiaries in his block and some other areas of Kashmir valley. Prime Minister Narendra Modi launched the second phase of the scheme recently. 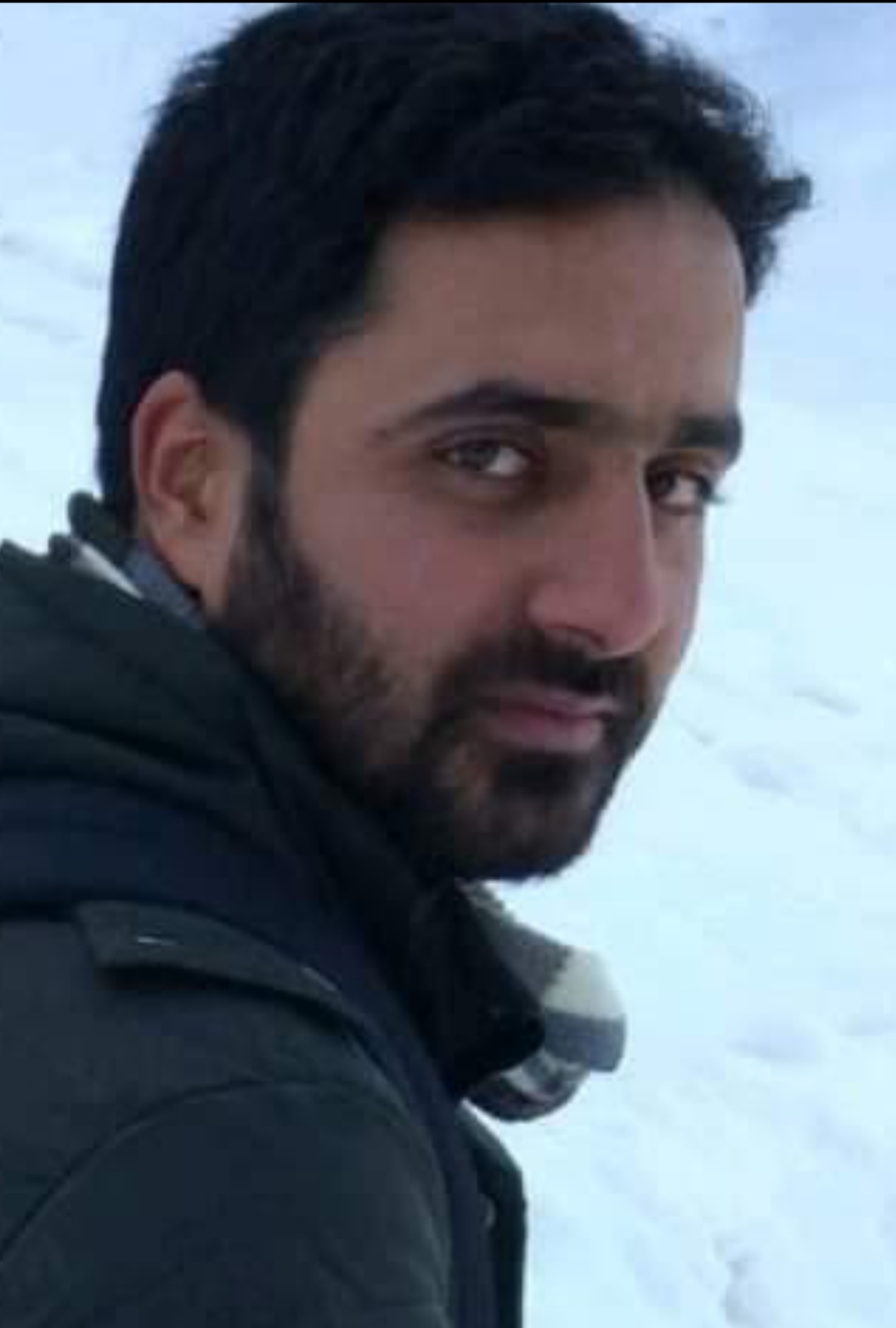 In his application, filed before the ministry of petroleum and natural gas, Mudaser sought the list of beneficiaries of selected villages and locations in Srinagar, Budgam, Kupwara, Pulwama and Baramulla districts.

Also read: The poor get LPG cylinders under Modi’s PMYU but they can’t afford refills 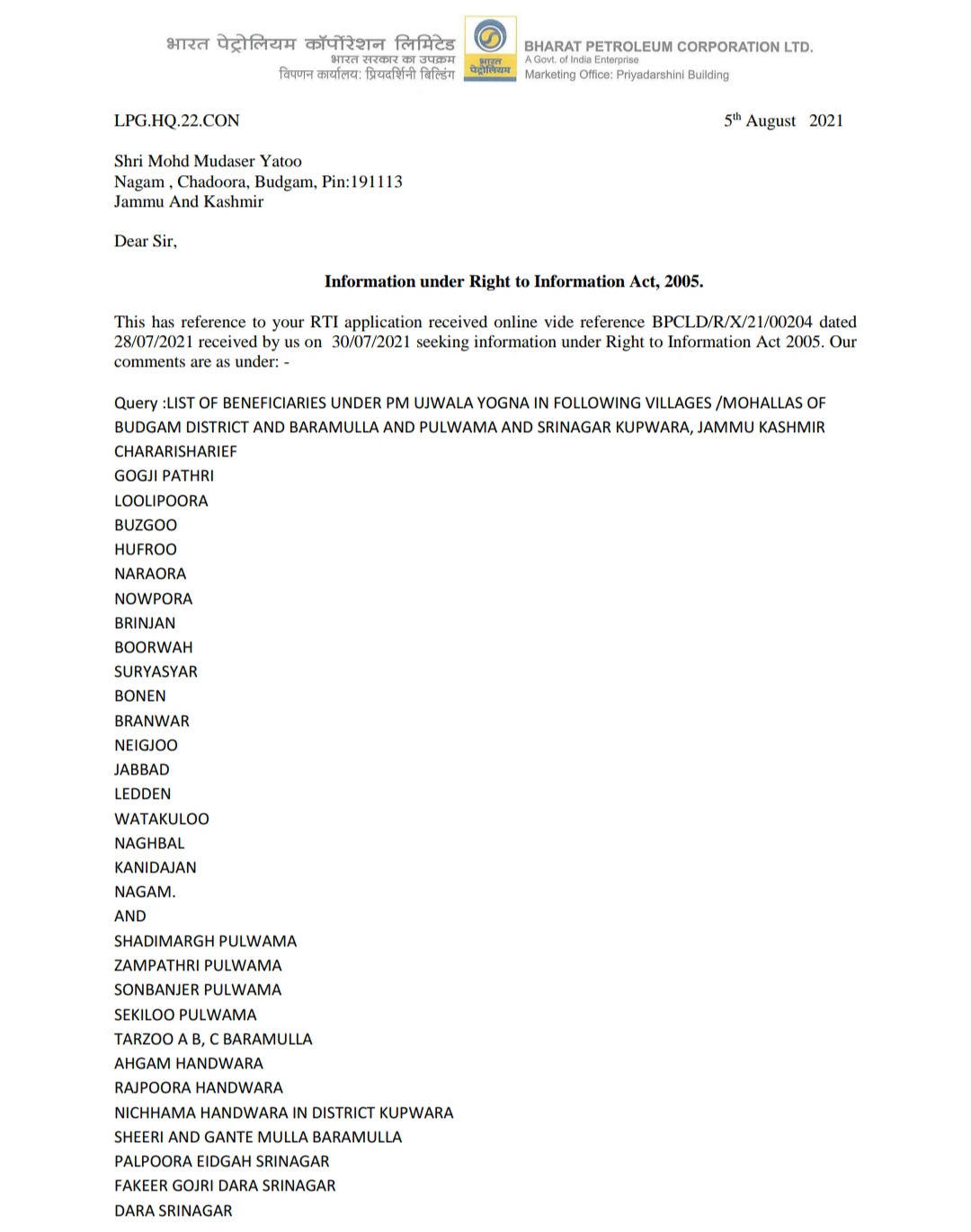 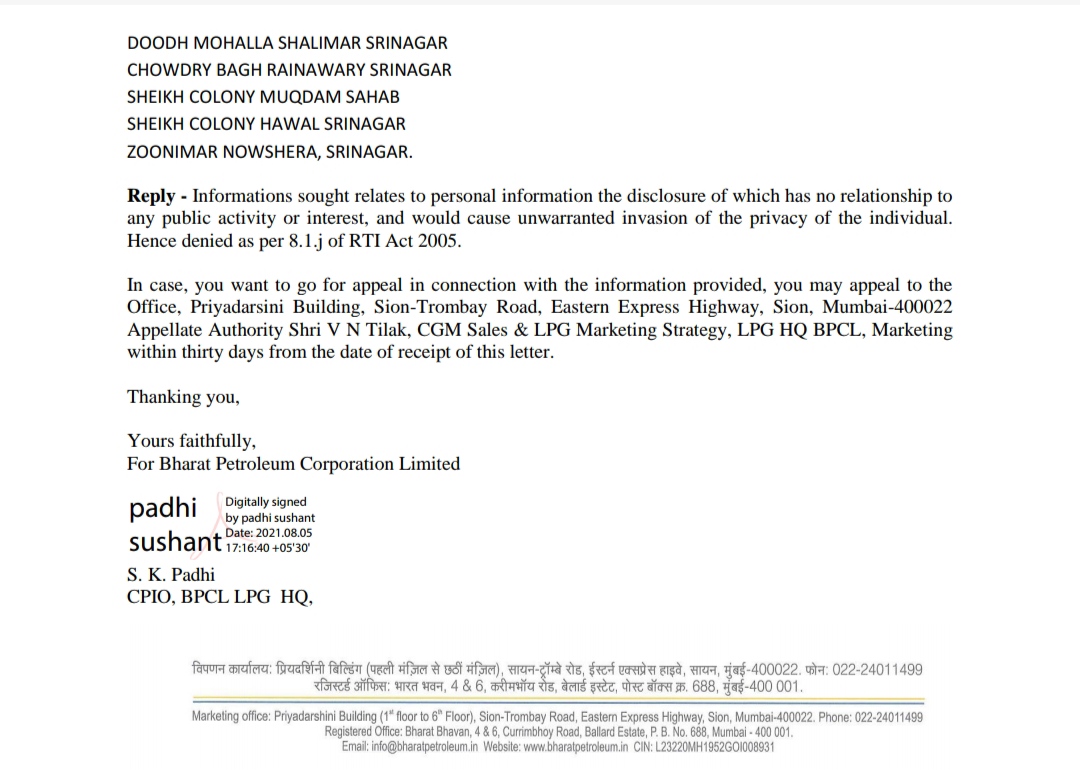 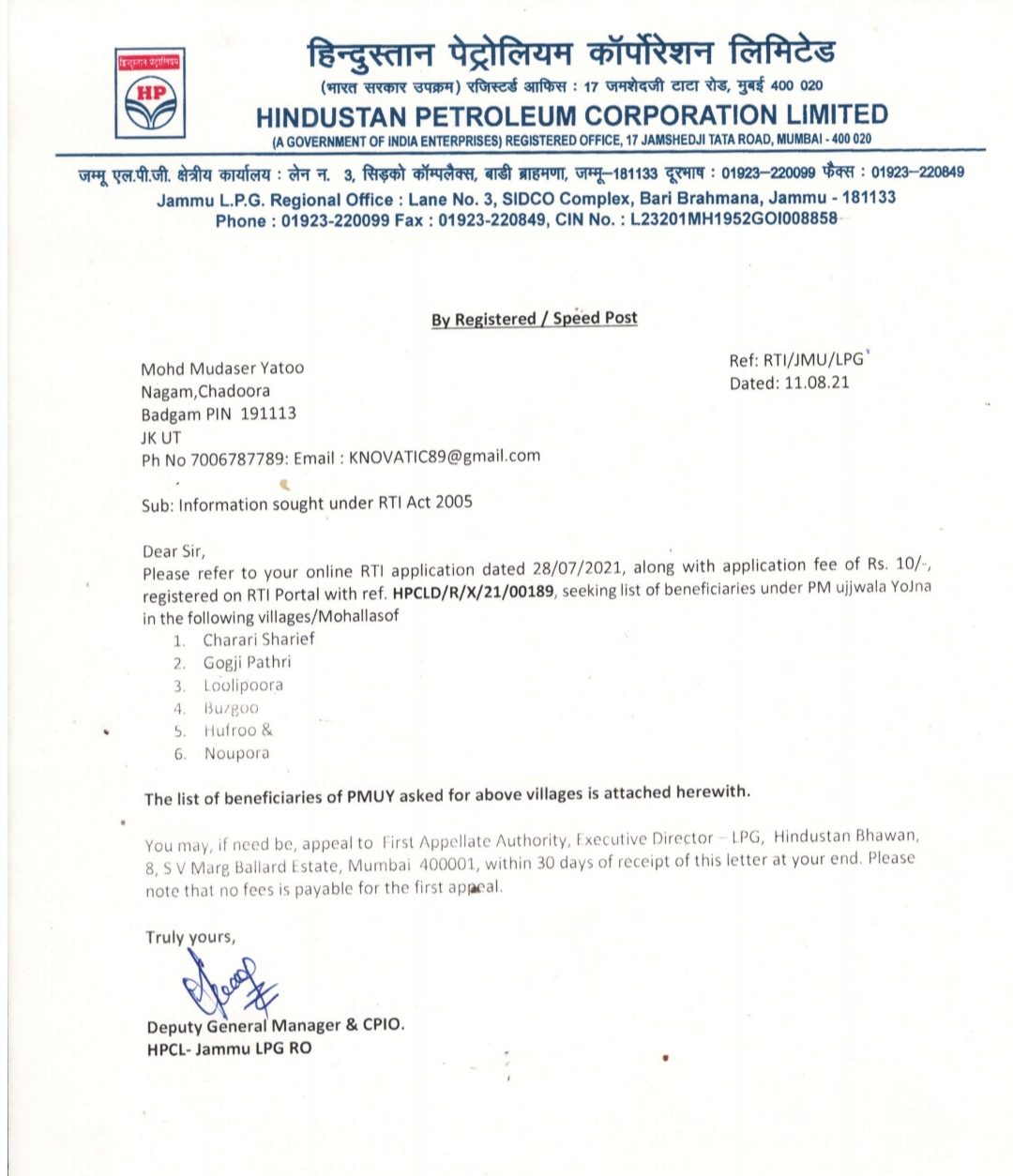 Mudaser wanted information that should have been made available proactively by BPCL as mandated under Section 4(1)(b) of the Act. There are scores of families in J&K who have been denied Ujjwala gas connections. When the author asked a senior BPCL officer to accompany him to verify the number of beneficiaries, he excused himself citing lack of manpower.

(Raja Muzaffar Bhat is a Srinagar-based columnist and activist. He is the founder and chairman of the Jammu and Kashmir RTI Movement and an Acumen India Fellow.)