No Result
View All Result
in Agriculture Parliament Watch

No compensation to family members of farmers who died in ongoing protest: agriculture minister Tomar

The Central Government Tuesday informed the Lok Sabha that it does not propose to give compensation to the families of the farmers who have died during the ongoing agitation against the three contentious farm laws.

The Minister of Agriculture and Farmers Welfare Narendra Singh Tomar was responding to questions asked by dozens of Members of Parliament (MP) whether the Centre proposed to compensate families of those who died in the agitation.

Centre informs #LokSabha that it does not propose to give compensation to the families of the farmers who have died during the agitation.#ParliamentWatch#FarmersProtest pic.twitter.com/6kdCHU66br

The Minister also informed the Lok Sabha that a total of 11 rounds of meetings had been held between the Government and agitating farmers’ unions to resolve the issues between October 10, 2020, to January 21.

While responding to another question asked by a different set of MPs, the Minister said that in so far as the NCT of Delhi was concerned, the Delhi Police has said that from September to December 2020, 39 cases had been registered against farmers protesting the recently passed laws at the Delhi border.

Centre informs Lok Sabha that in so far NCT of Delhi is concerned, Delhi Police has informed that 39 cases have been registered against the farmers protesting against ‘#FarmLaws’ between September to December, 2020 at Delhi border. One suicide case has also been reported. pic.twitter.com/hckl6EZPt6

The Delhi Police has also stated that one suicide case had been reported to them during the protest, the minister added.

On being asked about the number of farmers that had died during the agitation, the Minister gave no reply. He instead said the responsibility of maintaining law and order, including investigations, registration/ prosecution of crimes, conviction of accused, protection of life and property etc. rested primarily with the respective state governments. 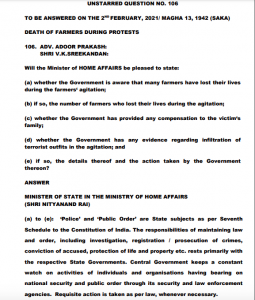 Earlier the Delhi police released a list of 120 arrested persons in connection with the ongoing protest.

On Republic Day, clashes erupted between farmers and the police after a group of farmers allegedly defied the routes fixed for their planned tractor rally.

The Supreme Court on January 12 stayed the implementation of the three farm laws until further orders and constituted a four-member committee for the purpose of listening to the grievances of the farmers relating to the laws and the views of the government and to make recommendations.

Bhupinder Singh Mann, one of the four members of the committee later recused himself.