Earlier, the author had explained in The Leaflet how government officers in Jammu and Kashmir have been ignoring applications under the RTI Act.

In this second piece, RAJA MUZAFFAR BHAT says that ironically, officers in the civil secretariat are adamantly refusing to share information under this law. This has become a trend among public authorities ever since the abrogation of Article 370.

THE government claims that public service delivery has improved ever since the abrogation of Article 370 and that public authorities have become more accountable. Yet there are dozens of instances that prove the contrary; that officials have become more unresponsive and insensitive to public grievances, especially when it comes to RTI applications.

Take the case of Mushtaq Ahmad Lone, who lives in a remote village in the Budgam district of Jammu and Kashmir and belongs to the Below Poverty Line category. He has been denied information under the RTI Act by the district collector’s office and by the administrative department of the Rural Development and Panchayati Raj (RD&PR) department.

On September 1, 2020, Lone filed an application before the designated Public Information Officer in the RD&PR department at the civil secretariat in Srinagar. He applied via Speedpost (receipt no. EE836403096IN) and attached a copy of his BPL ration card, which is also called the Priority Household or PH ration card. He got no response within 30 days, so he filed the first appeal before the designated First Appellate Authority (FAA) of the same department on October 31. His appeal was also dispatched via Speedpost to Jammu, as by the end of October the civil secretariat moves to Jammu.

Lone told The Leaflet that he does not know the name or designation of the PIO or FFA as the administrator of the RD&PR Department had no working official website at the time he was pursuing his application.

Danish Yousuf, a masters student in social work at Delhi University, tried to assist Lone, but could only find the official website of the administrative department of RD&PR in Srinagar and Jammu. “Until recently, the administrative department had no official website. It launched its website only after activists and media criticism. Now, if there was no official website, on what basis was the government claiming that a digital interface had been created at the panchayat level?” Yousuf asks. “This violates section 4(1)(b) of the RTI Act, 2005, wherein public authorities are supposed to make a voluntary disclosure of information,” he says.

The new website has posted the RTI Rules, 2009 and 2012. However, the 2009 rules were repealed way back in 2012 when former chief minister Omar Abdullah led the government in the erstwhile state of Jammu and Kashmir. The rules of 2012 are also no longer in operation as they related to Jammu and Kashmir’s RTI Act, 2009, which has also been repealed. In addition, the website even now provides the name and contact numbers of the PIO and assistant PIO, but there is no information provided about the FAA.

The erstwhile J&K State Information Commission used to dispose of RTI appeals in 60 to 120 days under the earlier act, which was repealed after Article 370 was abrogated. Now, people do not know when their appeals would be listed as the disposal mechanism under the current RTI Act is not time-bound.

Around three-and-a-half months after he filed his RTI application, on 17 December 2020, Lone received a communication from the office of the RD&PR Department. It was titled “Rejection Order” and signed by Dr Udham Dass, Deputy Secretary, Rural Development and Panchayati Raj Department, Civil Secretariat, Jammu. He is the designated PIO. The letter had been signed on 8 October, but it reached Lone’s village after almost 70 days via ordinary post.

The distance from Jammu to Budgam is 300 km, and it never takes over a week for the ordinary post to cover this distance.

“I have apprehensions that the letter was dispatched on December 10 or thereabouts, as the FAA too failed to adjudicate my appeal,” says Lone. He believes the PIO, to “play safe”, mentioned an incorrect date to hide the department’s mismanagement, and thereafter used the ordinary post to distort the actual sequence of events.

This concern is substantiated by the fact that the stamp and seal on the envelope that carried the letter to Lone’s village from the office of the PIO mentions neither a date nor a number, whereas, in the normal course, dispatches from government offices definitely carry these details. Instead, there is only a small initial on the letter. “This clearly indicates that the officer wanted to hide the exact date of dispatch of this letter from his office, as he and the FAA had wasted almost 110 days when they did not respond to my RTI application and first appeal,” Lone says.

Otherwise, the PIO would simply have asked his office to send the letter via speed post, as is done in RTI cases. This author, who has been regularly filing RTI applications for 15 years, has never got an RTI response through an ordinary post.

Also Read: Jammu and Kashmir has made a travesty of Forest Rights Act

Perhaps the officer does not know that Lone is known in his area as an RTI campaigner for the last decade (despite being a school dropout).

To destroy evidence is not only a violation of the RTI Act, 2005, but also a serious crime under section 204 of the Indian Penal Code (IPC). Lone has taken up this matter with the Central Information Commission (CIC) where he filed his second appeal, on December 18.

He does not know when his appeal would be listed as the appeal disposal mechanism under the Act is not time-bound. It was time-bound under the repealed J&K RTI Act, 2009. The erstwhile J&K State Information Commission (JKSIC) used to dispose of RTI appeals in 60 to 120 days under the earlier Act, which was repealed after Article 370 was abrogated. 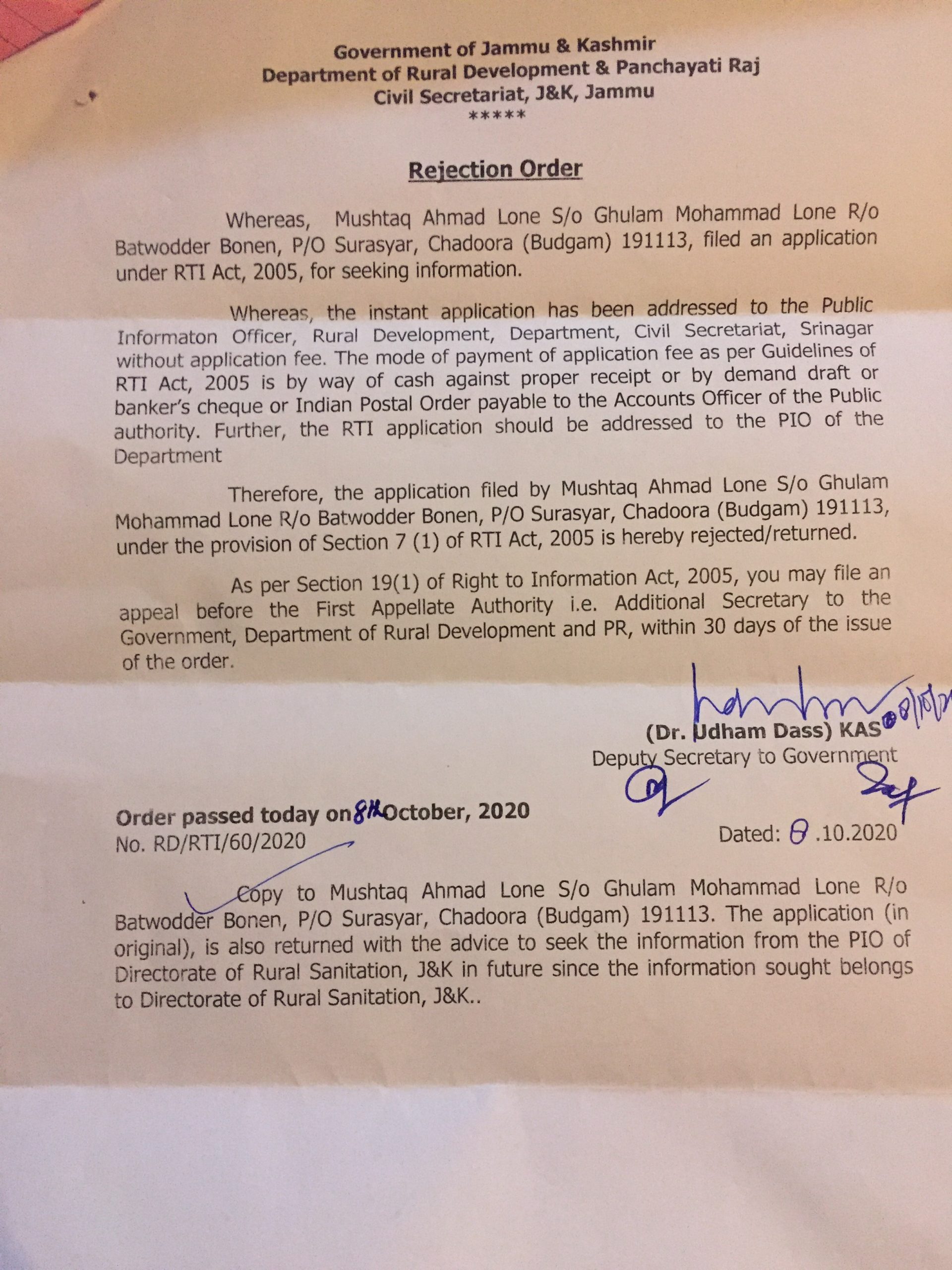 CONTENTS OF THE REJECTION ORDER

“It seems the officer is not well-versed with the RTI Act, 2005, and needs a training programme. I had also addressed my application to the designated PIO,” Lone says. He has now sent all the relevant documents to the CIC in New Delhi. Now he awaits the hearing for his appeal, which he expects will take a long time. 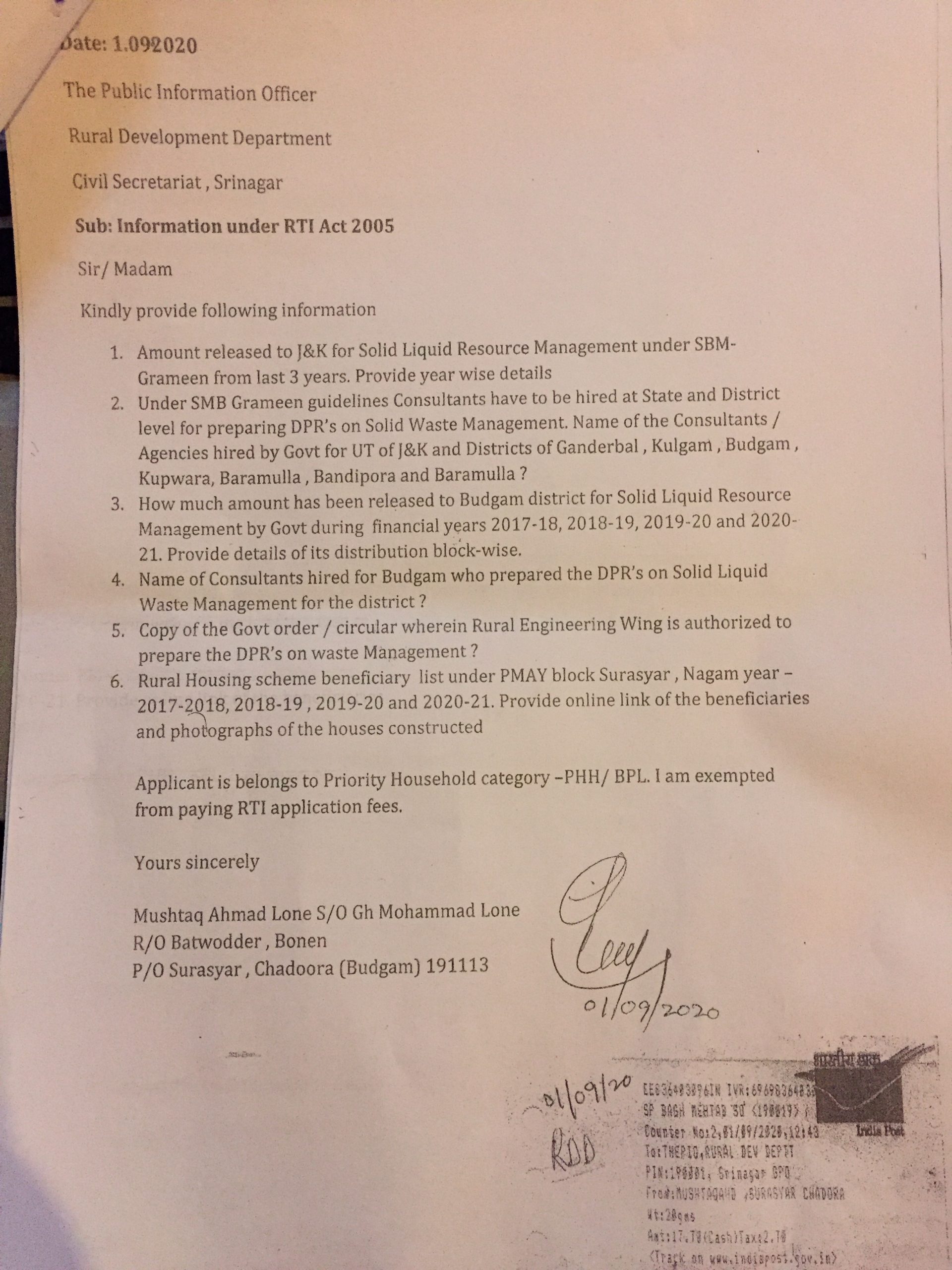 “Before abrogation of Article 370, our appeals would get listed within two months and within three-four months we would get a final judgment under the old Act,” Lone says.

Ever since the abrogation, the PIOs and FAAs have been misleading information-seekers, especially those who are not well-off. Government officers are taking undue advantage of the fact that the JKSIC has been shut down and harassing people like Lone on one pretext or another.

The information Lone sought falls under Section 4(1)(b) of the RTI Act, 2005, and should have been available on the official website of the J&K RD&PR Department.

WHAT INFORMATION IS LONE SEEKING?

He only seeks basic information related to sanitation and the implementation of the Swachh Bharat Mission (SBM). This is a scheme the central government says has made long strides over the last five or six years. Indeed, the scheme has made some achievements in ending open defecation, but this practice was never a challenge in J&K. It is waste management that is a serious problem for small towns and villages in the Valley.

Lone, therefore, had sought information on the implementation of SBM’s Gramin (rural) arm in some districts, including details of funds allocated for waste management in villages.

The state government has posted the RTI Rules, 2009 and 2012 online. However, the 2009 rules were repealed in 2012, while the 2009 law itself has been repealed. The current website provides the name and contact numbers of the PIO and assistant PIO, but no information on the FAA.

SEEKING INTERVENTION OF THE L-G

On January 19 this year, a delegation of transparency activists including this author met the Jammu and Kashmir Lieutenant Governor Manoj Sinha at Raj Bhavan in Srinagar. We requested him to set up a circuit bench of the CIC in Srinagar and/or Jammu so that people like Lone can easily file appeals and complaints under the RTI Act. 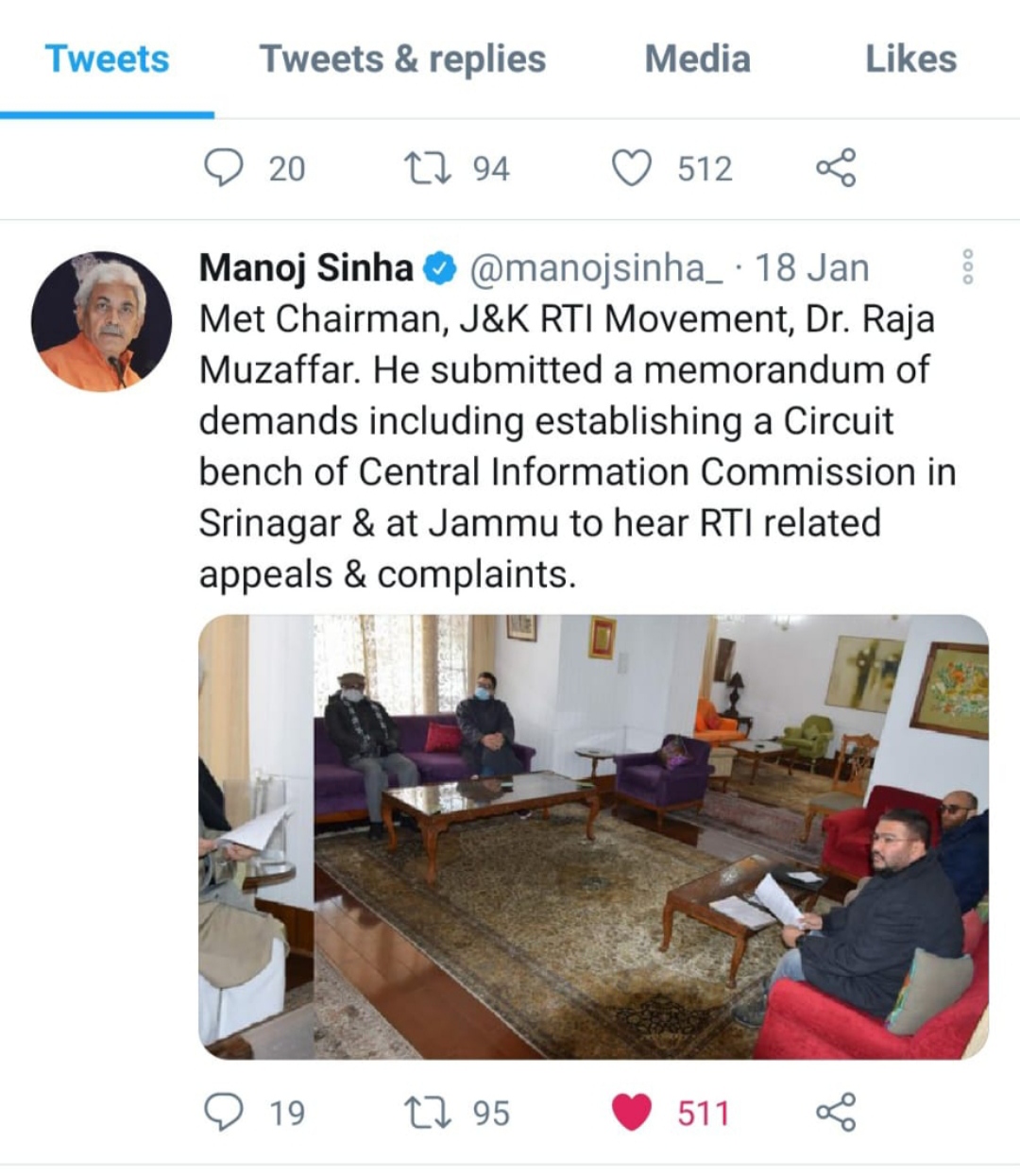 After a patient hearing, the LG assured that he would make some of these issues a top priority. Soon after, on  January 29, the government issued an official circular directing all administrative secretaries, deputy commissioners and heads of departments to update their official websites and improve online service delivery. The General Administration Department (GAD) has sought a compliance report in this regard by February 18 (see pic 3). 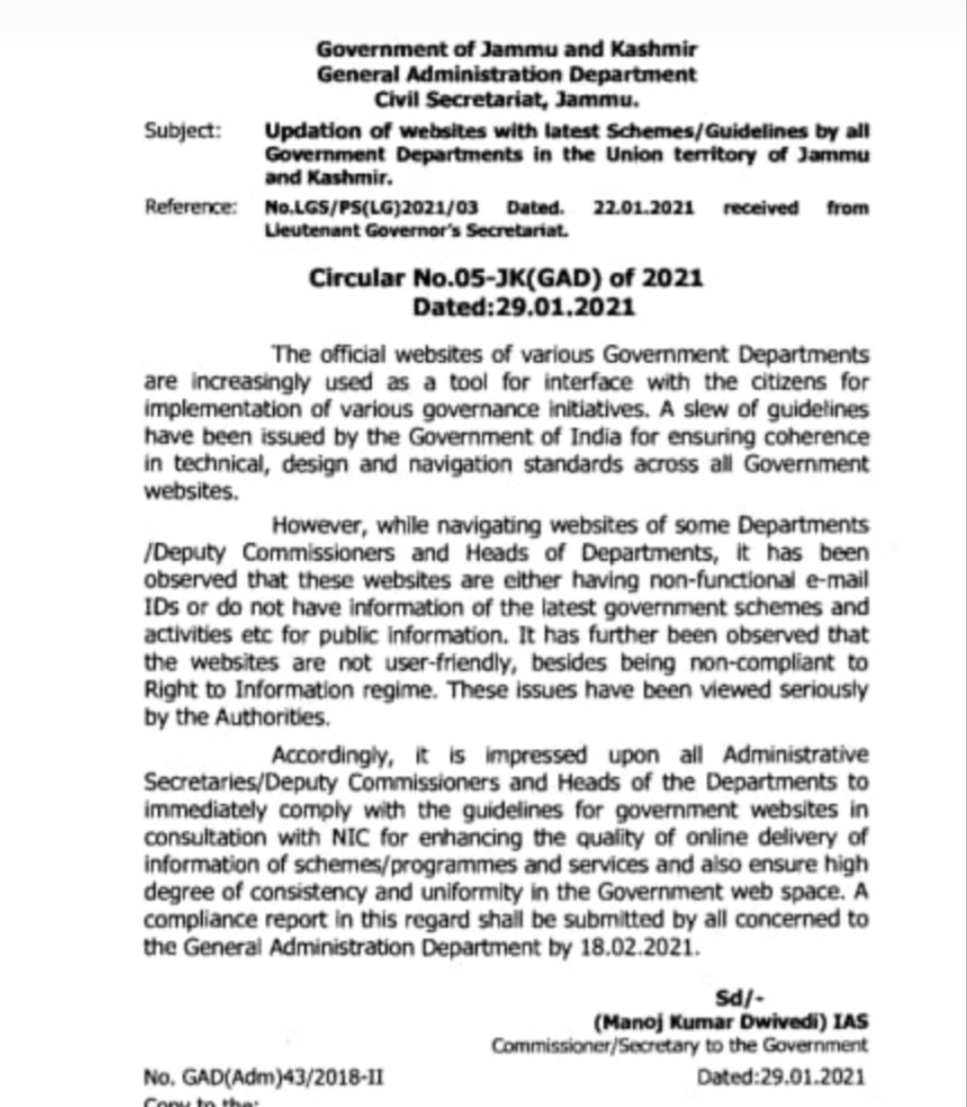 Dozens of cases of denial of information under the RTI Act, 2005, go unnoticed and unheeded. The situation is worse in the Union Territory of Ladakh. This author gets regular calls from distressed citizens complaining about non-responsive PIOs.

From the Block Development Office to the Civil Secretariat, aggrieved people hardly get any justice in Jammu and Kashmir. The implementation of the RTI Act by the higher judiciary is also not appreciable. The Jammu and Kashmir High Court, for example, took two months to adjudicate my appeal over an RTI application. This too, was only after an appeal before the Registrar General, who is the FAA. Ultimately, the designated PIO dispatched a reply but it is cryptic. One can hope that things might improve in the coming months, for the issue is in the knowledge of the LG.

(Raja Muzaffar Bhat is a Srinagar-based activist, columnist and independent researcher. The views are personal.)

Karnataka clears transgender reservation; now other states must too

Covid aftermath: Government lives in denial of thousands dying due to lack of oxygen

Karnataka clears transgender reservation; now other states must too