No Result
View All Result
in Governance Judiciary

[dropcap]E[/dropcap]VERYONE agrees that delays in judicial delivery give rise to a large number of our country’s problems. I decided to try and evaluate how many extra judges would be required to start reducing judicial backlogs.

The 20th Law Commission, in its report no. 245 submitted in July 2014, after examining the issue from different perspectives concluded that the ‘Rate of Disposal’ per judge per year is the right method for evaluating this. In simple terms, it assumes that if ten judges are disposing of 10,000 cases, 12 judges will dispose of 12,000 cases. This may not be precise but is likely to be the correct position broadly.

I took the data reported by the Law Commission in its report and did a proper analysis of its data for 2002 to 2012 of fourteen states for the subordinate courts it had taken. A careful analysis shows that if it had been ensured that all sanctioned positions of judges were filled there would have been no backlog by 2007. This would mean the queue would disappear and it would have been possible to devote adequate time to all cases without having to wait.

In most cases, it should be possible to dispose of cases in less than 3 to 6 months. In Australia, over 70% of the cases in the Magistrate’s courts are decided within 13 weeks. The Law Commission analysis assumed that the complete backlog must be finished in 3 years and did not take the vacant judicial positions into account. Hence it came to the erroneous conclusion that the strength of the judiciary needs to be doubled.

I also decided to take a look at this issue by analyzing the data given on the Supreme Court’s website for a twelve-year period from 2006 to 2017 (both years included) which has a quarterly report for all the courts (See Attachment 1). This analysis has been done by adopting the same ‘Rate of Disposal’ method accepted by the Law Commission.  The summary of this analysis is tabulated as Attachment 2. This shows that the number of sanctioned judges is adequate and if all the sanctioned judges were appointed mounting pendency and huge delays would be history.

The number of judges sanctioned in the three levels on 31 December 2017 was 31 in Supreme Court; 1,079 in High Courts; and 22,704 in the Subordinate-Courts. The actual number of judges appointed was 25,676 and 17,028 in the three levels. Thus, the total number of sanctioned posts were 23,814 whereas the working judges were only 17,739. Filling about 6,000 vacant positions can make the judicial system deliver efficiently.

There can be no excuse for keeping judicial positions vacant while the nation suffers because of this neglect. The retirement date of judges is well known. It would be possible to factor in vacancies due to resignations, promotions and deaths by studying the past data. The increase of sanctioned positions can also be forecast early. Looking at the standard deviation in the disposal per judge each year gives us the assurance that the disposal rates in different years are reasonably consistent.

Another way of looking at this data for the twelve-year period from 2006 to 2017, assuming an average vacancy of 5% is: 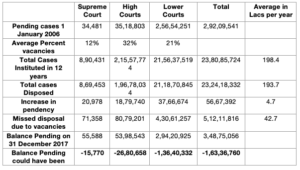 The number of registered advocates is about 1.3 million and over 60 thousand graduates emerge each year from our law schools. Even if the infrastructure is inadequate it would need to be augmented by only about 20%.

Even if we assume that there would be a capital cost of setting up courtrooms this would not exceed about 4 crores per court-house which would mean about 24,000 crores only. This is a simple solution and can be implemented very easily. This does not assume any change in the way judges and lawyers function.

It only assumes that the extra judges who fill the vacancies will also dispose of matters at the same rate as those who are already in the system. While the sanctioned judicial positions are about 19.1 judges per million the actual working strength is only 13.9 judges per million population.

Surely it can be ensured that this process can always be started twelve months earlier. and the Collegium recommendations are sent to the government three months before the vacancy occurs. There should be a similar approach for subordinate judges, of ensuring that the selection process is finished in advance.

For the sake of the nation, all those responsible must ensure that all judicial appointments are made in a timely manner. An easy solution is available. This analysis suggests that if a simple process of estimating vacancies and ensuring zero vacancies is followed, the sanctioned strength is adequate to dispose of the inflow of cases and some backlog.

Even if we assume that there would be up to 5% vacancies, the backlogs would go down dramatically. If this simple solution is implemented the problem will move towards a resolution.  This is a simple mechanical solution.

If the queue of cases does not keep getting longer, most delays would be reduced considerably. If the queue is very small there is not much scope for delays. If a policy decision were taken to ensure zero vacancies in the judicial positions, it appears that the backlogs would become history and the fundamental right to speedy justice would be actually implemented in our courts. The policy decision could also be made a law with accountability fixed for who is responsible to ensure its implementation.

Acknowledgement: I have been given great help from my friend and batch-mate Arun Joshi in the calculations and analysis.