Serious intervention and a well-targeted awareness campaign is the need of the hour so that these communities rely on credible and scientific treatments and preventive measures.

With the rising cases of Covid-19, the virus has killed more than 2.9 lakh people across the country. Many in the BJP-led government have been peddling pseudoscience and have condoned the beliefs in alternative cures and unscientific practices while displaying disregard for scientific consensus.

In this context, the tribal population in Madhya Pradesh is choosing to opt for alternative cure practices that might adversely affect their lives rather than help them show any significant improvement.

According to the 2011 census, Scheduled Tribes constitute nearly 86% of the population in Jhabua district with a 35% literacy rate in rural parts. In Jhabua’s urban areas, the hospital bed to population ratio is 46 beds per 10,000 people. The availability of hospital beds in rural parts of the district is abysmally low.

Majority of the tribal population comprising Bhil, Bhilala and Patela communities in Madhya Pradesh’s Jhabua district is choosing a mala (garland) made of ‘herbs’ to treat mild Covid-19 symptoms. It has been a belief among the communities that this mala treats typhoid, pneumonia and cures some other diseases. The mala is made by stringing together a few herbs attached with a sacred red thread. The local sellers buy these herbs from nearby cities for around Rs 50 per kg, while a mala is sold at Rs 30-40. The preference for the mala can also be partly attributed to the misinformation surrounding vaccines and hesitation of the locals owing to that.

Tersingh Bheru Munia, a native of Narela village in Jhabua, who also sells malas in the market and treats patients with various herbs at his home, said that the tribals fear that the vaccine may cause death. Therefore, rather than going to the hospital, they choose to seek ‘treatment’ with the help of the mala. He suggested than every third house in the village is using the ‘mala treatment’ at home for three days — which simply means that they would have to wear the garland around their necks for the said period. 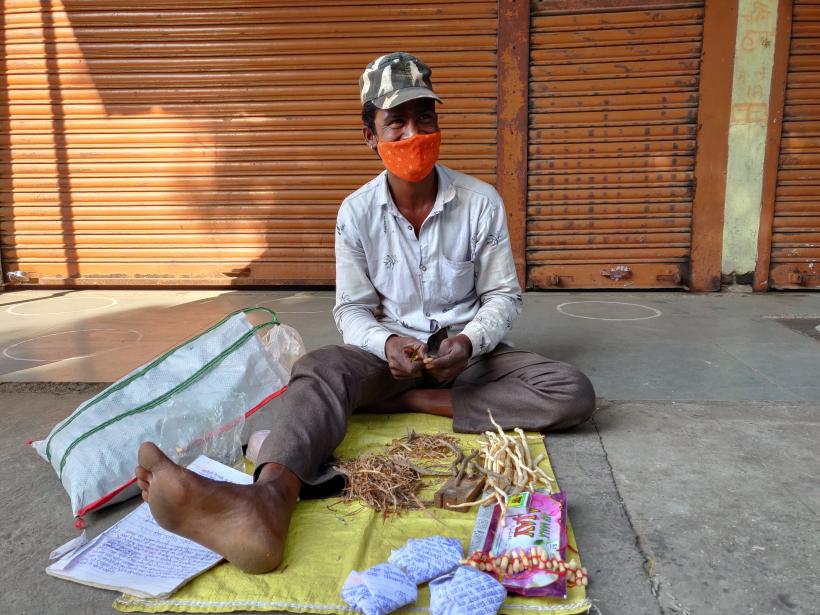 When asked if patients are relying less on the hospital and medicines, Munia said, “If our treatment works and treats patients in three days, then why will they opt for medication or hospitalisation?”

The mistrust and lack of awareness about medical treatment and vaccines seem to have remained largely unchallenged in the absence of healthy interventions by the government. With minimal vaccine awareness carried out in Jhabua and no strategy employed to address community-specific concerns, the tribal population finds more hope in their own local remedies.

Patru, another mala seller, who claims to be between 25 and 30 years old, from the Rampuriya village, told NewsClick that three generations in his family have sold such malas and ‘herbal medicines’. “Patients used to come to our home to buy these. My father or grandfather never went to the market to sell these,” claims Patru. “But to survive, I am selling these here (in the market). I own a piece of farmland and used to sell fruits and vegetables too earlier,” he added.

Nitin Dhakad from Shiv Ganga Jhabua, a social organisation working to empower tribals, told this reporter that while campaigning in villages across the district to spread awareness about medication, hygiene, and the use of masks, he did notice that people were opting for malas either based on preconceived beliefs or because of misinformation.

Dhakad said that a few cases, where despite having received a vaccine dose people succumbed to COVID-19, have led to much hesitation among the tribals — in the absence of proper knowledge about the usefulness of the vaccine in reducing the risk of such a death.

Serious intervention and a well-targeted awareness campaign is the need of the hour so that these communities rely on credible and scientific treatments and preventive measures.

The author is an IIMC graduate; he can be reached at @meliwar_mayank on Twitter.

Who Will Penalize the Laxity on the Part of Law Enforcers? – Part I

State machinery at odds: What Delhi courts have said about the Delhi Police’s investigation of the Delhi riots of February 2020