Four village panchayats in Kashmir have adopted a resolution to stop unscientific waste disposal in their area. RAJA MUZAFFAR BHAT writes from Kashmir about how the Municipal Council, Sopore, has been breaking a number of laws and dumping solid waste on village land.

THE Scheduled Tribes and Other Traditional Forest Dwellers (Recognition Of Forest Rights) Act, 2006, also called the Forest Rights Act or FRA is being criticised by several environmental and wildlife activists across India. They believe giving land rights to tribal and forest-dwelling populations will destroy natural resources, forests, and wildlife.

The FRA was extended to Jammu and Kashmir along with dozens of other central laws on 31 October 2019 soon after Article 370 was abrogated. Until November 2020, neither the Centre nor the Union Territory administration said a word about the FRA. Then, starting last year in mid-November, the government invoked the 94-year-outdated Indian Forest Act, 1927, and began issuing eviction notices to Gujjar tribals and other traditional forest-dwellers.

Some Gujjar-owned huts in villages that are close to forests were demolished and thousands of apple trees axed, especially in the Kanidajan area of the Budgam district in Central Kashmir.

After protests from the affected people and the national, international media highlighting the issue, the government of Jammu and Kashmir decided to roll out the FRA by the end of December. Although there are lots of challenges in implementing this law, there are some developments that environmentalists and wildlife lovers would find favourable.

The residents of four village panchayats seem to have better ideas about how to conserve and manage their natural resources than the local authorities, who are untrained in scientific natural management.

Recently, four village panchayats in the Tarzoo area of Baramulla district adopted a joint resolution by invoking section 5 of the FRA 2006, empowering the Gram Sabha to protect the wildlife, forest, and biodiversity of the village and ensure that adjoining catchment areas, water sources, and other ecologically sensitive areas are adequately protected. Through the resolution, the village panchayats have asked the government, especially Municipal Council, Sopore, to stop dumping solid waste which was a severe threat to the environment and biodiversity in their area.

For 10 years, the Municipal Council of Sopore in North Kashmir has been on the lookout for space for a landfill, but without success. Earlier, waste was either dumped by the roadside or near waterbodies in town. Sopore town residents and traders protested the unscientific waste management but the municipal institution has not been able to do anything. 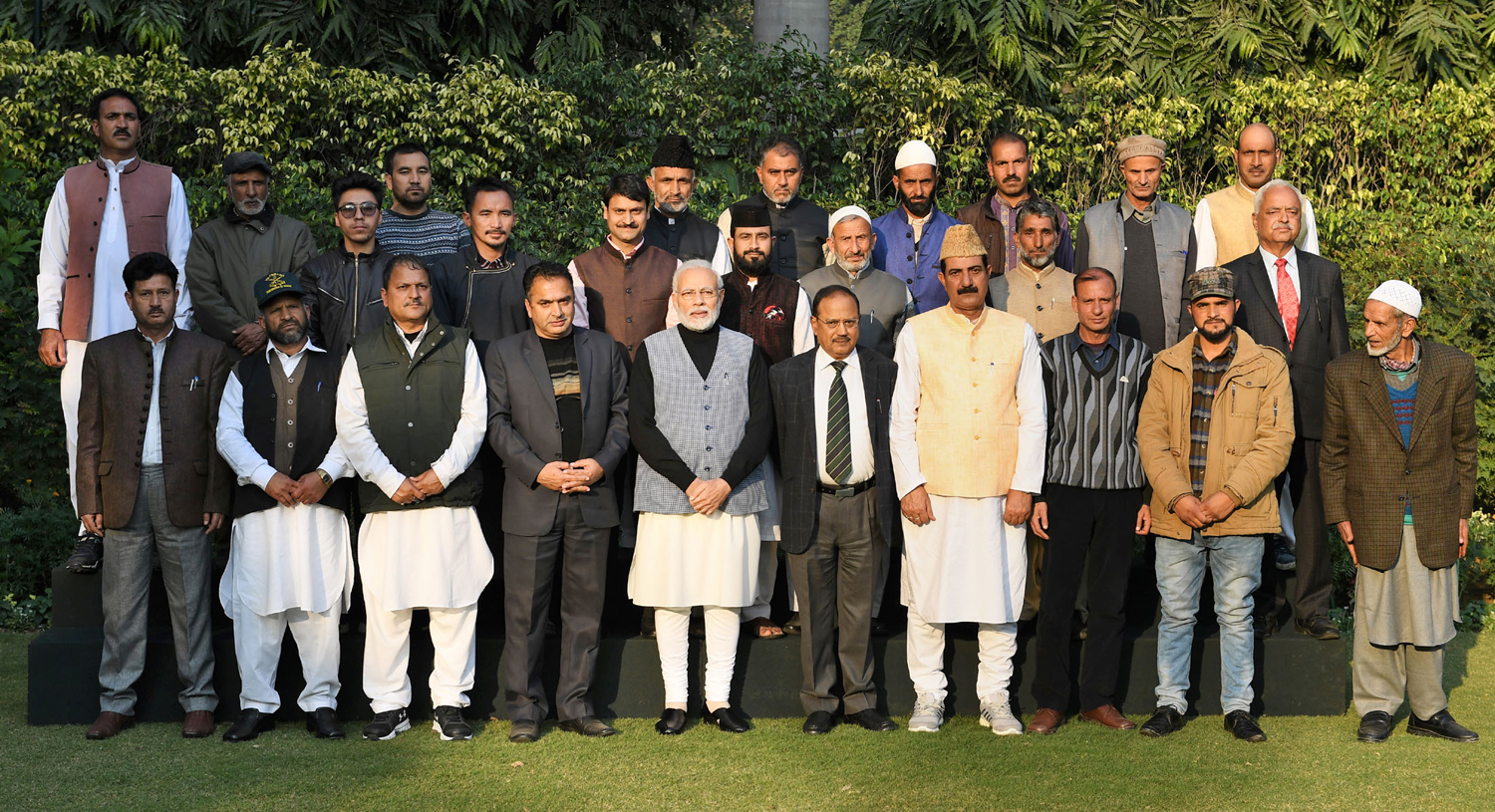 The main reason is the lack of scientific knowledge among the municipality officials, plus the unavailability of financial resources. The municipal institutions in Jammu and Kashmir, particularly in small towns, are controlled by the Directorate of Urban Local Bodies in Jammu and Srinagar. These two directorates are dependent on the Housing and Urban Development Department (HUDD) in the Civil Secretariat.

This has caused problems for the people living in small and large towns of Jammu and Kashmir. Recently, the residents of Magam town caught the local municipal officials red-handed, dumping municipal solid waste into the Ferozpur river in the dead of night. Magam town also has no landfill site and for many years the municipal solid waste has been piling up on the banks of rivers, water-bodies, and open plots.

During last year’s COVID-19 lockdown, trucks of the Sopore Municipal Council carrying solid waste collected from the town started illegally unloading them near the Wular Wetland catchment area in Tarzoo. This area also falls under the Ninglee forest range. It is the district administration of Baramulla that gave them the green signal, as they too are under constant public pressure from residents of Sopore town.

Managing municipal solid waste is becoming a daunting task in almost all towns of Jammu and Kashmir including Srinagar and Jammu.

It is the bureaucrats and other officials of local bodies who are to blame for the mess, as they do not make attempts to treat the waste. They only search for sites to dump the waste in, without any scientific treatment. This is a clear violation of the MSW Rules, 2016.

Jammu and Kashmir do not have not a single scientific landfill site, so waste is dumped unscientifically in every town.

The Wular lake is a UNESCO Ramsar site in Jammu and Kashmir and one of the largest freshwater lakes in Asia with an average size between 30 to 260 square kilometers, depending on the season. The residents of Tarzoo, a huge village consisting of four panchayats, protested the municipal waste being dumped around their village, but soon there was a national lockdown last year from the end of March due to the COVID-19 pandemic.

The municipal council of Sopore took advantage of the lockdown and kept dumping its waste near the wetland. This was being done in clear violation of MSW Rules 2016, Wetland Conservation and Management Rules 2017, and other environmental laws. After a few months, residents under the Central Auqaf Committee again started their campaign.

I wrote on the issue on World Environment Day last year and subsequently filed a complaint before the National Green Tribunal (NGT), which took note of it. On 10 July 2020, the NGT Principal Bench headed by Justice AK Goel issued notices to the District Magistrate Baramulla, State Wetlands Authority (SWA), and Jammu and Kashmir Pollution Control Board.

The SWA was constituted in Jammu and Kashmir only recently, after years of delay. The residents of Tarzoo, through their Central Auqaf Committee also moved to the High Court of Jammu and Kashmir. It took strong note of the case. Then Chief Justice Geeta Mittal visited the spot last year and ordered that site immediately closed. The waste already dumped there was buried under the soil which was transported in trucks just before her visit.

The Division Bench of the High Court directed the constitution of a committee at the district level to identify an alternate location for waste treatment along scientific lines. After Geeta Mittal retired, the district administration and municipal officers identified another site in the same village to dump waste, which happens to be forest land and a wetland catchment area.

For the last two months, the municipal waste has been dumped on village panchayat land adjacent to the proposed forest land. A No-Objection Certificate is awaited from the forest department after which the land will formally turn into a garbage dump. The residents and their panchayat representatives are resisting this.

Nazir Ahmad Rather, sarpanch, Tarzoo, told The Leaflet, “The Municipal Council Sopore has again started dumping its waste in Tarzoo area, not even seeking permission from four village panchayats. The land for the new landfill site is demarcated forest land and locals have community forest rights over it under the Forest Rights Act 2006.”

According to section 5 of the FRA, the Gram Sabha is entrusted with protecting wildlife, forests, the environment, and the ecology of villages. “Now the gram sabha has passed a resolution asking the Municipal Council Sopore to stop the illegal and unscientific waste dumping in our area,” says Rather. The resolution has been signed by all the four Sarpanches and Central Auqaf Committee of Tarzoo.

“This is binding on the government, but it seems our resolution has no takers. PM Narendra Modi and Union Home Minister Amit Shah have been speaking about granting more autonomy to panchayats, but we do not see that. We are unable to even protect our environment,” he says.

The wetlands of the Wular lake attract a variety of bird and animal species. This is where the government is dumping solid and biomedical waste.

At the village level, section 41 of the Biodiversity Act provides for the constitution of Biodiversity Management Committees (BMC). The BMC has to prepare a peoples’ biodiversity register and has powers to ensure conservation and eco-restoration of biological resources.

Therefore, it can resist the way waste is being dumped unscientifically in the Tarzoo area, as it violates village-level biodiversity. The waste is being dumped on grazing land for local cattle and sheep, where hundreds of species of birds, including migratory birds that visit the area from October to March every year, come to rest.

“The municipal council Sopore is violating the Municipal Solid Waste Rules 2016 and threatening the habitat of wildlife and biodiversity. How can garbage be dumped on forest land? We want a biodiversity park here instead, for tourists and nature lovers,” says said Ajaz Ahmad Dar, patron of the Central Auqaf Committee, Tarzoo.

Violation of Biomedical and Wetland Rules

This author visited the illegal garbage site created by the Municipal Council Sopore. There were dead animals and hazardous biomedical waste in the dump; I saw syringes, needles, expired medicine, etc. The municipal authorities seem ignorant of the Biomedical Waste Management Rules 2016. Such waste has to be treated separately at an independent location.

It seems neither the Jammu and Kashmir Pollution Control Board (JKPCB), now known as the Pollution Control Committee, nor the District Magistrate are aware of this lapse: the municipal authorities collect waste from clinics and hospitals and dump it at Tarzoo in a casual manner.

I am sure the municipality has no awareness about this hazardous waste. The area in which the government set up a new garbage dumpsite is part of the Wular wetland area. The lake is a mere half km from the site. Wetland includes the lake and its marshes, rivers, lakes, deltas, floodplains and flooded forests, rice fields, coral reefs, marine areas no deeper than six metres at low tide, as well as human-made wetlands such as waste-water treatment ponds and reservoirs.

A garbage dump site being built on an eco-sensitive area—that too against the wishes of four village panchayats—makes it clear that the administration has gone out of control in Jammu and Kashmir.

Wetlands are a critical part of the ecosystem. They mitigate floods, protect coastlines, build community resilience to disasters, reduce the impact of floods, absorb pollutants, and improve water quality. The government is dumping waste in a flood plain that is flooded almost every year during the summer months. Waste from the area will be washed away by floods, further threatening local biodiversity.

Prime Minister Modi called the District Development Council (DDC) election held last December “historic”. Modi, the Home Minister, and several other Union ministers, on many occasions, have reiterated that they want autonomous and empowered panchayats in Jammu and Kashmir.

In December 2018, while meeting a delegation of newly-elected sarpanches from Jammu and Kashmir and Ladakh, lead by Shafiq Mir Chairman of the Jammu and Kashmir Panchayat Conference, Modi had assured his full support to the success of the Panchayati Raj model. The government machinery is not at all prepared to empower and handhold these public representatives.

Just days back, Lieutenant Governor Manoj Sinha, while interacting with District Magistrates from Kashmir valley, directed them to ensure the FRA is properly implemented. Now that the Gram Sabha of four panchayats in Tarzoo, Baramulla, has passed a resolution to stop illegal garbage dumping in their area. One can only hope the government respects this resolution.

(Raja Muzaffar Bhat is a Srinagar-based activist, columnist, and independent researcher. He is an Acumen India fellow. The views expressed are personal.)

The Cruelty of Clemency: Mercy Petitions and the Abolitionist Discourse

Right to be forgotten does not exist in case of court judgments, rules Madras HC