No Result
View All Result
in Analysis Law and Technology

Internet shutdowns in India are increasing every year as the government resorts to it most of the time to silence protests though it says it is doing it out of security concerns. In an era where we are all hoping for the emergence of Digital India, the people of India deserve better, says RHEA BINOY.

AS the farmer protests go on, it is important to highlight the larger problem of curbing freedom of expression with the shutting down of the internet. It has become a matter of concern, as the country has seen major internet shutdowns with suspensions ordered in text messaging and internet services during the Delhi and Haryana farmer protest rallies on Republic Day and the suspension being extended to Haryana.

In 2016, the United Nations stated that restricting internet access is a human right violation.

Internet shutdowns have been used by various countries as a tactic resulting in silencing people. For instance, in Belarus, there was a total of 218 hours of internet shutdowns, with $336.4 million of economic loss last year. Myanmar saw an internet shutdown of a whopping 5,160 hours, with a loss of $189.9 million.

It also results in huge economic losses. The internet shutdown was a staggering 50 percent more in 2020 than in 2019 all over the world.

According to research by the UK-based digital privacy and security group, Top10VPN, in their report titled, ‘Global Cost of Internet Shutdowns’ said that India restricted internet access more than any country in the year 2020. The country shut down the internet over 75 times in 2020, for a total of 1,655 hours of internet blackouts, and 7,272 hours of bandwidth manipulation resulting in an economic loss of $2.8 billion and affecting 10.3 million internet users.

The report said that India and Myanmar had the longest shutdowns continuing from 2019 to 2020.

India ranks second in the world in terms of mobile internet users.

In the report by Access Now, an internet advocacy group, it was observed that India had a total of 134 internet shutdowns. The country accounted for 67 percent of the world’s total recorded internet shutdown, in 2018.

The majority of these shutdowns were targeted at mobile services with a total of 305 shutdowns, with a significant rise in 2018 with 126 shutdowns from 51 in 2017.

According to the data analysed by DW using the internet shutdown data by  Software Freedom Law Center Data, a non-profit legal services organisation, it was observed that between 2012- 2019 the most common reason for shutting down the internet was state violence accounting for 45 percent, with public violence, protest and misinformation following behind. A shutdown could be related to one or multiple contexts, it said.

The rules for how to shut down the internet have been laid out in the Temporary Suspension of Telecom Services (Public Emergency or Public Safety) Rules, 2017. It states that the telecom services can be shut down temporarily owing to “public safety”, but has further failed to define the term.

In the report by Access Now, an internet advocacy group, it was observed that India had a total of 134 internet shutdowns. The country accounted for 67 percent of the world’s total recorded internet shutdown, in 2018. The report highlighted how the shutting down of the internet can leave vulnerable people without access that is important to them. Denial of information can affect their lives, it said. 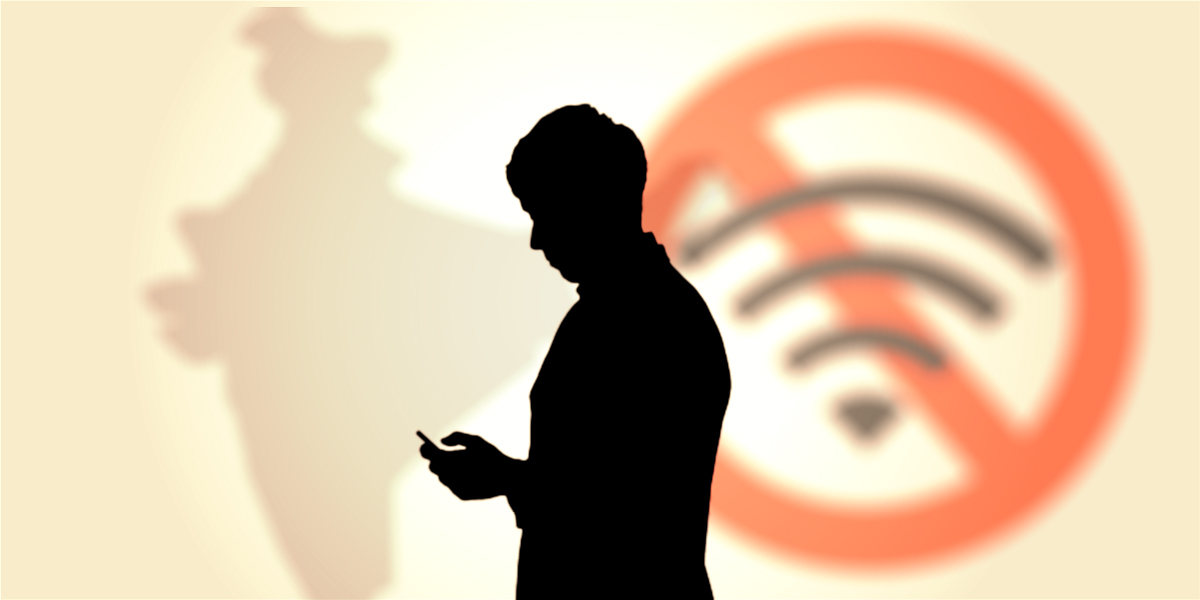 The South Asian countries saw more than 97 internet shutdowns between May 2017 and April 2018. According to the report by UNESCO – International Federation of Journalists, India witnessed the highest number of Internet shutdowns, with 82 out of the 97 shutdowns. Nearly half of them were reported in the country’s Kashmir valley, with cases also recorded in Rajasthan, Haryana, Punjab and Bihar.

In a report titled ‘Internet freedom in selected countries in 2020’, by Freedom House, a US-based research group, Iceland ranked first in terms of internet freedom worldwide with 95 points, while China took the last position with 10 points. India had 51 points with partial internet freedom.

While the highest number of internet shutdown was seen in Jammu and Kashmir, it was also observed in the states of Rajasthan, Uttar Pradesh and West Bengal

THE IMPLICATIONS OF INTERNET SHUTDOWNS

After the repealing of Article 370 by Parliament, the government shut down the internet in Jammu and Kashmir, from August 4, 2019 until March 4, 2020, lasting 213 days. The restriction included the blocking of landlines as well as mobile services.

A report by Human Rights Watch in 2019 spoke about how the internet shutdown had affected the day to day activities and services, where traders could not continue with their business. Tourism was affected. Students could not complete their studies and courses. Journalists could not communicate and report freely. It also disabled people from paying taxes and applying for insurance. Many were unable to communicate with their families staying in other states, and towns.

Another report by the Human Rights Watch report in 2020 mentions that the manipulation of the bandwidth resulted in doctors unable to access information and major developments related to COVID-19. After the network restrictions were lifted off in March 2020, the pandemic struck and the government imposed a countrywide lockdown, resulting in online classes for the students.

In Kashmir, the restrictions were lifted in March 2020. They were lifted off after bandwidth was manipulated that resulted in citizens being only able to use 2G connections on verified SIM’s. It was recorded as the longest internet shutdown in any democracy in the world, as observed by The Washington Post.

Another report by the Human Rights Watch report in 2020 mentions that the manipulation of the bandwidth resulted in doctors unable to access information and major developments related to COVID-19. After the network restrictions were lifted off in March 2020, the pandemic struck and the government imposed a countrywide lockdown, resulting in online classes for the students. The 2G connections have made it impossible for students to attend online classes further impacting their education.

During the widespread protests in 2020, against the Citizenship Amendment Act and the proposed NRC, the country saw internet shutdowns in the parts of Delhi, Uttar Pradesh, Karnataka, Assam and Meghalaya.

During the internet shutdown due to the Citizenship (Amendment) Act, services like food delivery, cab services, e-retail were severely affected. Apps such as Swiggy and Zomato saw a volume dip by 10 percent to 20 percent in the areas of Uttar Pradesh and NCR. The shutdown also impacted the online retail and e-grocery business.

The cab drivers of Ola and Uber from the area of the Ghaziabad refused to take in passengers fearing violence and damage to their vehicles.

The internet shutdowns lead to a large economic loss, a 2018 report by the Indian Council for Research on International Economic Relations titled The Anatomy of an Internet Blackout: Measuring the Economic Impact of Internet Shutdowns in India said that the country lost $3.04 billion due to the 16,315 hours of internet shutdown during 2012- 2017.

An article by The Print mentioned how the internet shutdown goes against ‘Digital India’, and the ease of doing business. The report talks about research that has observed that hence a lot of people are dependent on the connectivity for commerce, lives are disturbed due to the restricted access to basic services.

Internet access remains restricted in several districts of Haryana, following the recent clashes between police and farmers protesting against the agricultural reforms. According to the Ministry of Home Affairs, the decision taken to “maintain public safety and averting public emergency.”

The internet shutdowns have been criticised recently by various farmer unions which said that the government move was to stop real facts about the protests from reaching the public.

The internet has bought the world much closer than ever before. Crucial activities around which life revolves like finances, communication, business and education depends on the internet. As the United Nations says, it is every human being’s right to have access to the internet. When any government resorts to internet shutdowns to silence its people, it must also see the harm it does which not only robs people of their freedom of expression and speech but makes them vulnerable and weak.

(Rhea Binoy is a student of Mass Communication, at the Symbiosis Institute of Media and Communication, Pune. She is an intern with The Leaflet. The views are personal.)