Hindutva is a Political Movement, not a Religious One: Shashi Tharoor

There is probably no politician in India today who is as prolific as Shashi Tharoor, the Congress MP from Trivandrum, Kerala.  After penning over twenty books, his latest, The Battle of Belonging, is an attempt to chronicle the churning that is happening in India today and also define what Indianness is. It also underlines what it means to be patriotic and nationalistic in India today.  RAMESH MENON reviews the book published by Aleph

As a student in school, Shashi Tharoor imbibed values of inclusivity, acceptance of difference, the celebration of diversity, respect for all religions, equality, fraternity, and concern for the poor. This was nationalism, to him. It continues to be so even today.

In the initial chapters, he details out various forms of nationalism and its practices in different ages and countries underlining how it has eroded in India.

All through the book, he fervently bats for civic nationalism saying that it allows people to be themselves, to express their views, and live as they wish. Hindu nationalism, on the other hand, seeks to reinforce a single faith community, speaking one language, following a single set of precepts, and owing allegiance to a single leader.

In an interview with television journalist Barkha Dutt, Shashi Tharoor had said, “Since 2014, those who came into power were not a part of the freedom struggle. They were not anchored in diversity but believed in the nationalism of identity and this is not the idea of the Indian constitution.”

Tharoor points out how the Modi government is turning around the idea of nationalism in India by attacking those who are critical or who disagree with the government saying that they are anti-nationalists.

When he returned to India around 2010, after  34 years abroad, India was very different from what it is today.

He points out that it is bizarre for the Congress to surrender nationalism to the BJP as the party did not have anything to do with Indian nationalism and celebrate it in a political way. In fact, the RSS, he says, which talks of nationalism, had little to do with the freedom struggle.

Did nationalism plus Hindutva help the BJP help to make headway? Tharoor points out how the Modi government is turning around the idea of nationalism in India by attacking those who are critical or who disagree with the government saying that they are anti-nationalists. This was completely different from the idea of India that Mahatma Gandhi and Nehru had. His own ideas in school about nationalism emanated from the freedom movement.

Does nationality really matter today, asks Tharoor, and says it does and it doesn’t. He talks of how in his huge extended family, many hold different passports, live in different countries and yet, “get reunited in his 200-year-old ancestral house in rural Palakkad, sharing memories of meals cooked by their grandmother, local lore, and hearing stories of our history and local mythology.”

Tharoor points out,  “We cannot define India by generalisation. One of the few generalisations that can safely be made about India is that nothing can be taken for granted about the country. Not even its name: for the word India comes from the river Indus, which flows in Pakistan. And India clung on to the label despite Bharat, the term by which is called in most Indian languages.”

He says that observers abroad are astonished by India’s survival as a pluralist state. India had over millennia offered refuge and, more importantly, religious and cultural freedom to Jews, Parsis, Christians, and Muslims. Jews had come to Kerala centuries before Christ. There were Christians in India even before Europe. Islam came to Kerala through traders, travellers and missionaries.

He writes: “India’s heritage of diversity means that in the Kolkata neighbourhood where I lived during my high school years, the wail of the muezzin calling the Islamic faithful to prayer routinely blended with the chant of mantras and the tinkling of bells at the local Shiva temple, accompanied by the Sikh gurudwara’s reading of verses from the Guru Granth Sahib, with St. Paul’s Cathedral just around the corner. 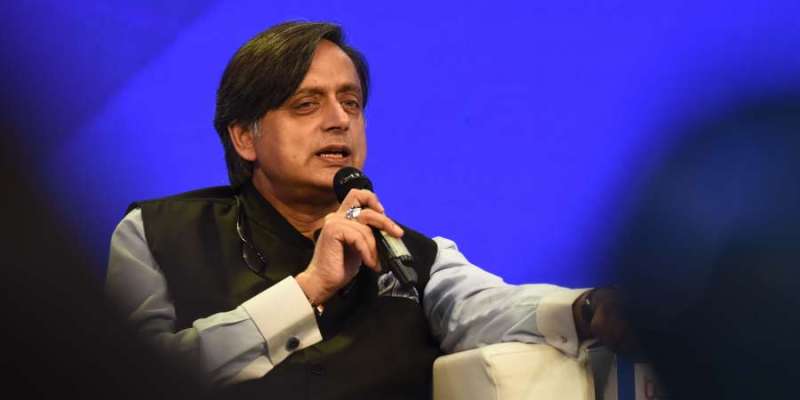 “Today, I represent in the national parliament the constituency of Thiruvananthapuram, the capital of Kerala, where the gleaming white dome of the Palayam Puma Masjid stands diagonally across from the lofty spires f St Joseph’s Cathedral, and just around the corner from both, abutting the mosque, is one of the city’s oldest temples, consecrated to Lord Ganesha. My experiences and encounters in my constituency remind me daily that India is home to more Christians than Australia and nearly as many Muslims as Pakistan. That is India I lay claim to.”

Tharoor talks of how India today has got divided by religion, region, caste, language, ethnicity. Politicians mobilise support on narrower lines of political identity. It had become more important to be a backward caste, a tribal, or areligious chauvinist than to be an Indian; and to some, it is more important to be a “proud” Hindu than to be an Indian.

Though nationalism is enshrined in the Indian constitution, it is under threat, says Tharoor, as it is being usurped by a majoritarian brand of nationalism that excludes certain communities.

He says: “If India is to reclaim its soul, the urgent national challenge is to restore, empower, and renew the very institutions of civic nationalism that the BJP has commandeered and weakened. These are the institutions that can best protect the minorities and the marginalised, that protect free speech and the expression of  unfashionable opinions, that elevate principles and values above the interests of politicians in power, that offer shelter and aid to the vulnerable, and so create the habits and conventions that make democracy the safest of political systems for ordinary people.”

The BJP, he says, wants to convert India into an ethnoreligious nation-state where members are unified by a common religion.

Tharoor hopes to see a New India where one does not get lynched for the kind of food one eats, marginalised for their faith, criminalised for falling in love or imprisoned for using the fundamental rights that the constitution guaranteed.

In one of the Constituent Assembly Debates, Babasaheb Ambedkar had on 4th November 1948 said: “To diehards who have developed a kind of fanaticism against minority protection, I would like to say two things. One is that minorities are an explosive force which, if it erupts, can blow up the whole fabric of the State. The history of Europe bears ample and appalling testimony to this fact. The other is that the minorities in India have agreed to place their existence in the hands of the majority…They have loyally accepted the rule of the majority, which is basically a communal majority and not a political majority. It is for the majority to realise its duty not to discriminate against minorities.”

Tharoor also quotes one of BJP’s newly found icons, Sardar Vallabhai Patel, who said: “It is for us who happen o be in a majority to think about what the minorities feel, and how we in their positions would feel if we are treated in the manner they are treated.” He said this in one of the Constituent Assembly Debates on 26th May 1949.

There is a need to fight back, he says, to defend Indian nationalism in its purest form. Indian diversity can be kept intact only by respecting and allowing various religions and communities to grow and evolve together, he argued.  Rightly so.

Tharoor hopes to see a New India where one does not get lynched for the kind of food one eats, marginalised for their faith, criminalised for falling in love or imprisoned for using the fundamental rights that the constitution guaranteed. New India should be fundamentally rooted in the idea of India. As Justice Chandrachud put it, “An idea anchored in the guarantee of individual liberty and the protection of a plural polity.”

He says he finds it easy to aim allegiance to Hinduism as it is personal and individualistic, it grants freedom to find answers to the true meaning of life. It is a religion that offers a wide range of religious practices, places great emphasis on the minds, values one’s capacity for reflection, intellectual enquiry, self-study and distances itself from dogma and holy writ. Hinduism accepts all paths as equally valid. Hindutva, he says, asserts the opposite of all this.

Maybe, there is hope. K R Narayanan, a Dalit born in a thatched hut with no toilet and running water, whose university refused to give him his degree along with other high caste classmates, ended up as President of India. A P J Abdul Kalam was a fisherman’s son who sold newspapers as a little boy but ended up as the father of India’s missile program and later, as President. Today, Ram Nath Kovind, another Dalit, occupies the highest office in the country symbolising diversity and egalitarian democracy.

The Battle of Belonging: On Nationalism, Patriotism and what it means to be Indian, Aleph Book Company, Rs. 799.

(Ramesh Menon is an author, documentary filmmaker, educator, and editor of The Leaflet.)

@rameshmenon100
Ramesh Menon has been a journalist for 43 years working with The Times of India, India Today, Business India Television, TV Today, rediff.com, and others. He is a recipient of Ramnath Goenka Award for Excellence in Journalism and the Madhavankutty Gold Medal for Journalism. He is presently Adjunct Professor, Symbiosis Institute of Media and Communication, Pune, and Course Director, Creative Writing, Sri Aurobindo Centre for Arts and Communication, New Delhi. He has produced numerous documentaries on environmental and social issues. He has authored six books. His latest was, “Modi Demystified-The Making of a Prime Minister published by Harper Collins.