“HOW do we better know Sampooran Singh Kalra?”. This query would have most of our Millennials and Gen Z scurrying for their smartphones, to Google the correct answer – Gulzar – the legendary lyricist, poet, director, screenplay/dialogue writer and winner of the Oscar, Grammy, Filmfare, National and countless other awards, in his six decades-long versatile and distinguished career.

Gulzar was a only teenager when Partition permanently uprooted him from his native village of Dina in Pakistani Punjab’s Jhelum district (ironically, a district in present-day Pakistan has given two Prime Ministers to Independent India viz. Inder Kumar Gujral and Manmohan Singh). He ultimately wound up in Bombay, doing odd jobs. The calumnies of partition, an unsympathetic family, disagreeable financial status and a disapproving father could not douse the flames of a poet that burnt bright inside him.  He was fascinated by Tagore and learnt Bangla so that he could read Tagore in original. 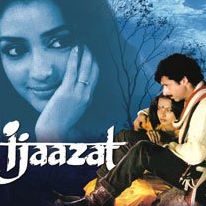 Two fortuitous events conspired to give Hindi Cinema one of its effulgent gems. Firstly, Gulzar was forced to leave his family and stay alone in a rented accommodation in suburban Bombay where his neighbors were Shailendra, Sahir Ludhianvi and Rajinder Krishan, all genius songwriters themselves who had already established themselves in Bollywood and thereby provided Gulzar with an unplanned entrepot into Bollywood. 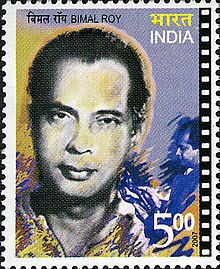 Secondly, a transient quarrel between arguably the finest music director and finest lyricist that Bollywood has seen – SD “Dada” Burman and Shailendra, during the making of Bimal Roy’s classic Bandini (1963), forcing Bimal Roy to look at an alternative song-writer and hence Gulzar got to write his hit song – “Mora Gora Ang Lai Le” filmed on Nutan, and the rest as they say, was history [For the uninitiated and in order to give context, the record for the maximum number of Filmfare Best Director Awards does not belong to Raj Kapoor, Guru Dutt, Yash Chopra, Sanjay Leela Bhansali or even a Karan Johar. It belongs to Bimal Roy, who has won 7 awards from 7 nominations circa 1954-1964. Whenever he was nominated, no other director could win. Bimal Roy was a veritable nursery, where some of the most talented directors, lyricists and technicians learnt and perfected their art – but this merits another article, for another day].

He directed his first film ‘Mere Apne’ in 1971, (memorable acting by Meena Kumari, in his one of her last films before her untimely death). Ijaazat (‘Permission’) was the 18th film directed by Gulzar and possibly his best, based on the prolific Bengali writer Subodh Ghosh’s book and eponymously titled Bengali film ‘Jatugriha’ (1964).

Bollywood has a disreputable history of trivializing/caricaturizing the “other woman”. She is the pouting, purring, skimpily clad sex kitten, out to ensare the gullible husband and wreck the household of the virtuous silently suffering, tear-jerking wife. Ijaazat too delved on the role of the “other woman” in a marriage but with a rare sensitivity, refinement and cinematic nous that not only defied the extant puerile stereotypes but set a cinematic standard that has rarely been equaled let alone surpassed. 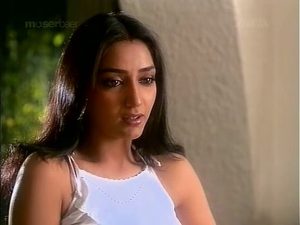 Mahendra (Naseeruddin Shah) is in love with the free-spirited, somewhat reckless, poetess Maya (Anuradha Patel – in the role of her lifetime). Circumstances, traditions and timidity (on the hero’s part) lead him to marry Sudha (Rekha) and just when Mahendra and Sudha are trying to get their marital life on tracks, circumstances conspire to lead Maya back in their lives.  How does the trio deal with this situation?  Maya isn’t your quintessential Bollywood vamp. She respects Mahendra and Sudha’s marriage but finds herself unable to excise all ties with Mahendra, who himself is inextricably and inexorably drawn towards her, feeling responsible to protect her from her self-destructing urges. Sudha’s sense of composure (and pity for Maya) is torn asunder when she realizes that Maya will be a perennial, omnipresent (and ominous) factor in their marriage. She finds this unacceptable and in a fit of impetuous rage, leaves both – her marital home and Mahendra, without any forewarning or intimation.

Years later, Sudha and Mahendra meet in the waiting room of a railway station. And the story unfolds, stunning the viewer. Well, I don’t want to spoil it for you. Hence I will say nothing further. Go watch and imbibe this masterpiece on a corona-induced languid evening. 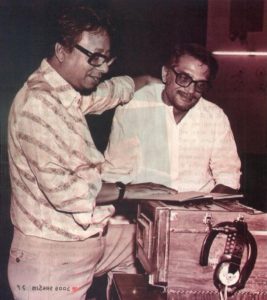 You can’t write about Ijaazat without devoting attention to its music. RD “Pancham” Burman’s musical score was a fitting match to the cinematic excellence that Gulzar dished out. There were four songs in this movie, -all female solos rendered by Asha Bhonsle – who won a National Award for her well-deserved efforts. 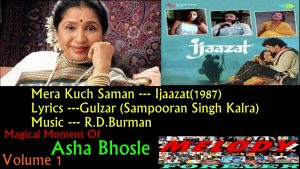 “Mera Kuch Samaan” ranks amongst my all time favourites. Gulzar’s lyrics, Pancham’s music and Asha’s vocals – all seamlessly combine to give us a song for the ages. The Ultimate Heartbreak Song. Unlike the usual rule, where the tune is created first by the music director and the lyrics are set to it by the lyricist, Gulzar wrote this song first and then gave it to Pancham, to compose a tune out of it.  Pancham read the elaborate poetic lines and tossed it aside, realizing it would be a near-impossible task to set these lines to a fitting tune. “Tomorrow you will give me a copy of the Times of India and tell me create a tune out of it!!” is what Pancham famously told Gulzar. But then Pancham wasn’t called a genius for nothing.

The Epilogue of “Mera Kuch Samaan” is probably the greatest couplet Gulzar ever penned. A fitting epitaph for a love story, whose life-span may have been ethereal but whose memories are eternal.”

(I seek only this permission from you, that when I finally bury your memories, I too shall put myself to rest, permanently, next to them)