Financial Irregularities in UP Govt Departments Expose Corruption amid Pandemic

A letter from the Director-general of Basic Education has revealed financial irregularities of Rs 9 crore in the department.

Chief Minister Yogi Adityanath’s claim of zero-tolerance towards corruption is proving to be hollow as reports of financial anomalies have emerged from two key departments of his government. Reports of alleged financial irregularities have added more to the embarrassment of the Bharatiya Janata Party government, which is already facing sharp criticism over mismanagement of the covid-19 second wave, which has devastated the state.

Officials of a few departments have allegedly minted money by taking advantage of the pandemic. According to reports, the officials of the Basic Education Department withdrew Rs 9 crore for meals and stationery for students even when schools have been closed since the national lockdown was announced last year due to Covid-19. Similarly, the case of alleged misappropriation of the public exchequer came into the light from King George Medical University (KGMU), where medical kits used for Covid-19 treatment have been purchased at much higher rates compared to other states.

A letter from the Director-general of Basic Education revealed financial irregularities of  Rs 9 crore in the department. As per the letter, a huge amount of money was withdrawn between February 11 and March 31 this year from the funds meant for the residential schools Kasturba Gandhi Balika Vidyalaya or KGBV in 18 districts of the state. 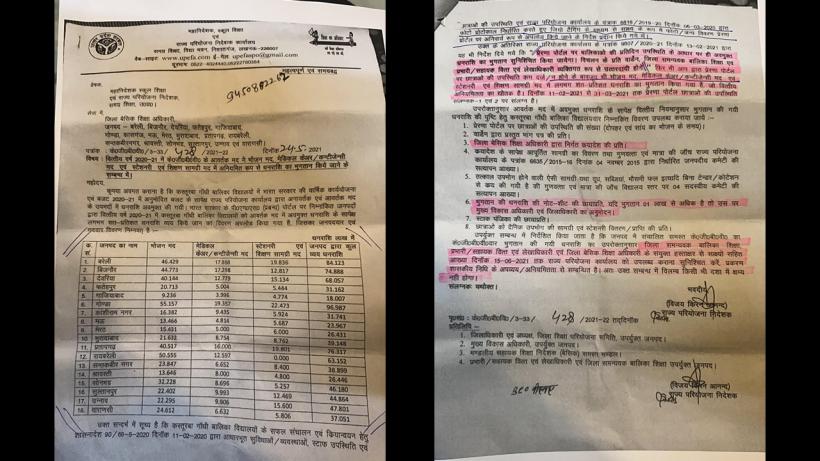 Interestingly, the funds were withdrawn for students of the Kasturba Vidyalayas, which come under the Basic Education Department, at a time when these schools were closed due to the COVID-19 pandemic. The government runs around 746 KGBVs.

The DGs’ letter to the district officials of his department revealed that Prime Minister Narendra Modi’s constituency, Varanasi was also on the list from where funds were withdrawn to provide meals, fruits, vegetables, milk, soaps, oil, and stationery to the students who were not even present in the closed schools.

Basic Education Minister Dr Satish Dwivedi is also the Minister in charge of Sonbhadra and money was allegedly withdrawn from the KGBV fund for this district as well.

Letter of the Director-General to the Basic Education officers of the 18 districts has exposed the misappropriation of funds allocated for the education of these girls. According to the letter, from the funds meant for the schools, Rs 84 lakh was withdrawn in Bareilly, Rs 74 lakh in Bijnor, Rs 68 lakh in Deoria, Rs 31 lakh in Fatehpur, Rs 38 lakh in Sant Kabir Nagar, Rs 47 lakh in Unnao, Rs18 lakh in Ghaziabad, Rs37 lakh in Varanasi, Rs 31 lakh in Kanshiram Nagar, Rs 23 lakh in Mau, Rs 26 lakh in Meerut, Rs 96 Lakh in Gonda,  Rs 26 lakh in Shravasti, Rs 39 lakh in Moradabad, Rs 76 lakh in Pratapgarh, Rs 63 lakh in Raebareli, Rs 46 lakh in Sonbhadra, and Rs 44 lakh in Sultanpur.

In 2020, a new rule was constituted for the Kasturba Vidyalayas mandating that photos of the students in their classes would have to be uploaded on the official portal “Prerna” for funds to be released for the schools. A hefty amount of Rs 9 crore was withdrawn from the banks, but there is no record available of students’ attendance. A new rule was also ignored as the attendance was uploaded on an official portal, before withdrawing funds.

According to the sources in the department, all students of the Kasturba Vidyalayas went back home after the announcement of a national lockdown.

When contacted, officials of the concerned minister apprised Newsclick that the letter has been sent to all Basic Education Officers to seek a reply on the issue. Officials of the minister said for further information, one has to contact DG Basic education.

But despite calling and messaging (SMS) several times to DG Basic Education Vijay Kiran Singh, he did not respond. However, Newsclick accessed the letter sent by Singh to his subordinates to seek a report on the financial anomalies. If DG Basic education responds to this issue later, his comment will be added to the story.

Now the question is where this money has gone if the schools were closed? Who withdraws the money? The whole matter needs to be investigated.

A report of alleged financial anomalies has also come into the light from the most prestigious medical institution of the state, King George Medical University, through a letter sent by a social activist to the chief minister. 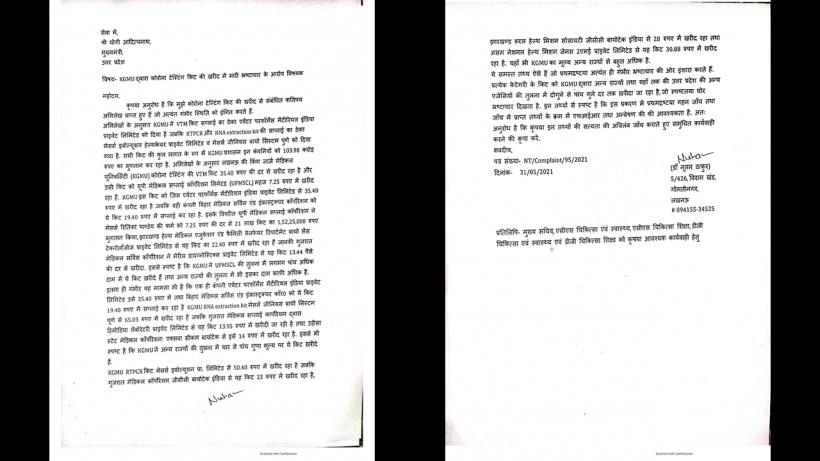 According to Dr Thakur, the KGMU had procured all the essential kits, VTM, RNA, and RT-PCR, at much higher rates than other states.

The Viral Transport Medium Kits (VTM Kits) are specially formulated medium for the collection AND transport of viruses. It is designed to maintain the optimum viability and virulence of the viral sample.

RT-PCR Kit: The MDS SARS-CoV-2 RT-PCR Kit is a reagent system. The assay includes an Internal Control (RNase P) to identify possible RT-PCR inhibition and to confirm the integrity of the reagents of the kit. The kit is developed to detect SARS-CoV-2 (E gene and S gene) RNA from a suspected infected patient’s specimen (such as sputum, nasopharyngeal swab, oropharyngeal swab).

On being contacted on the allegations, the KGMU administration said that all the allegations levelled by Dr Thakur were ridiculous. Dr Sudhir Singh, spokesman of the university administration, said the KGMUs procured any equipment or kit after the approval of the committee of experts, which includes doctors of other medical institutions too.

“We purchased all essential equipment and kits after a bid, and in each bid, we deliberated thoroughly on quality and cost-effectiveness both,” Dr Singh added.

However, Dr Thakur has sent a letter to the chief minister and demanded an inquiry into the matter. While talking to the Newsclick, she said that the news of rampant corruption was coming from the KGMU. The social activist claimed that she had enough evidence and documents that support her allegation.

“I had sent a letter to Chief Minister Yogi Adityanath in this regard and demanded an investigation into the procurement process,” Dr Thakur said.

Political commentators say that these reports might dent the BJP government’s prospects in the state. Veteran journalist and former editor of the “Times of India”, Atul Chandra said that this alleged embezzlement was not good for CM Adityanath ahead of the assembly elections in the state.

“News of alleged rampant financial irregularities are tarnishing the zero-tolerance policy of the state government and they would add more trouble for the Yogi government, which is already facing a crisis due to its failure in handling the Covid-19 catastrophe,” Chandra added.