No Result
View All Result
in Agriculture Analysis Farmers Rights

HISTORIC, unprecedented and massive are among the words that sum up the farmers’ preparations to ride into the national capital to hold a Republic Day parade. Hundreds and thousands of farmers, who are protesting the three agricultural laws enacted by the Centre in September, will enter the city with their tractor rally on “restricted stretches” to show their strength.

Tractors and trolleys were part of the 1952 Republic Day parade as well. But that was an official parade of the state, a sign of its power. In 2021, the tractors symbolise the failure of the state to address the country’s agrarian crisis and its willingness, according to the farmers, to let corporates have a free hand in agriculture.

“It’s not just a tractor rally or ‘farmers’ parade’…it’s a fitting reply to those who consider us ‘mutthi bhar log’ (a handful of people or a few people) occupying the Delhi borders. ‘Kisan mutthi bhar nahin, kisanon ki mutthi men sarkar hai’ (we are not a handful of people, but the government is in our hands). Call it a ‘jan aandolan’ (people’s movement), ‘shakti pradarshan’ (show of strength) or whatever you want, we are lakhs in number from across the country. And that is why they had to give in and give the nod for our parade. You (the government) better count your days,” fumed protesting farmers at the Ghazipur Border.

Another group, which was talking to some journalists, was overheard declaring, “Yeh aane waali nasal aur fasal ki ladai hai (this battle is for the next generation and crops).”

A serving soldier of the paramilitary forces was also among the protestors who were surrounded by scribes.

On being asked if he was flouting service rules by being at the protest side, he said, “Does the government have any moral right to expect discipline from the men in uniform? Our elders are out in the open for the past 59 days. They are being maligned for raising their concerns. Isn’t it hypocritical that the government, which drags security forces every now and then for its pity politics, wants us to keep mum against a big injustice. The majority of us defending the nation belong to farmers’ families. We will get back to farming after our retirement. We are here because our future is at stake.”

On being asked if he was flouting service rules by being at the protest side, he said, “Does the government have any moral right to expect discipline from the men in uniform?….”

A group of farmers who had come to the city in 2,600 tractors from western Uttar Pradesh said that the government would now see the extent of the farmers’ strength.

“Did you notice the body language of Union Agriculture Minister Narendra Tomar when he said putting the laws in abeyance for 18 months was the best the government could offer? He was speaking like a dictator in a democratic country. It has been around two months since farmers occupied the Delhi borders. Nothing has happened. Now, it’s time for the government to face the consequences. The Republic Day parade is just the beginning of a meaningful agitation. It’s now an ‘aar ya paar ki ladai,’” they said. 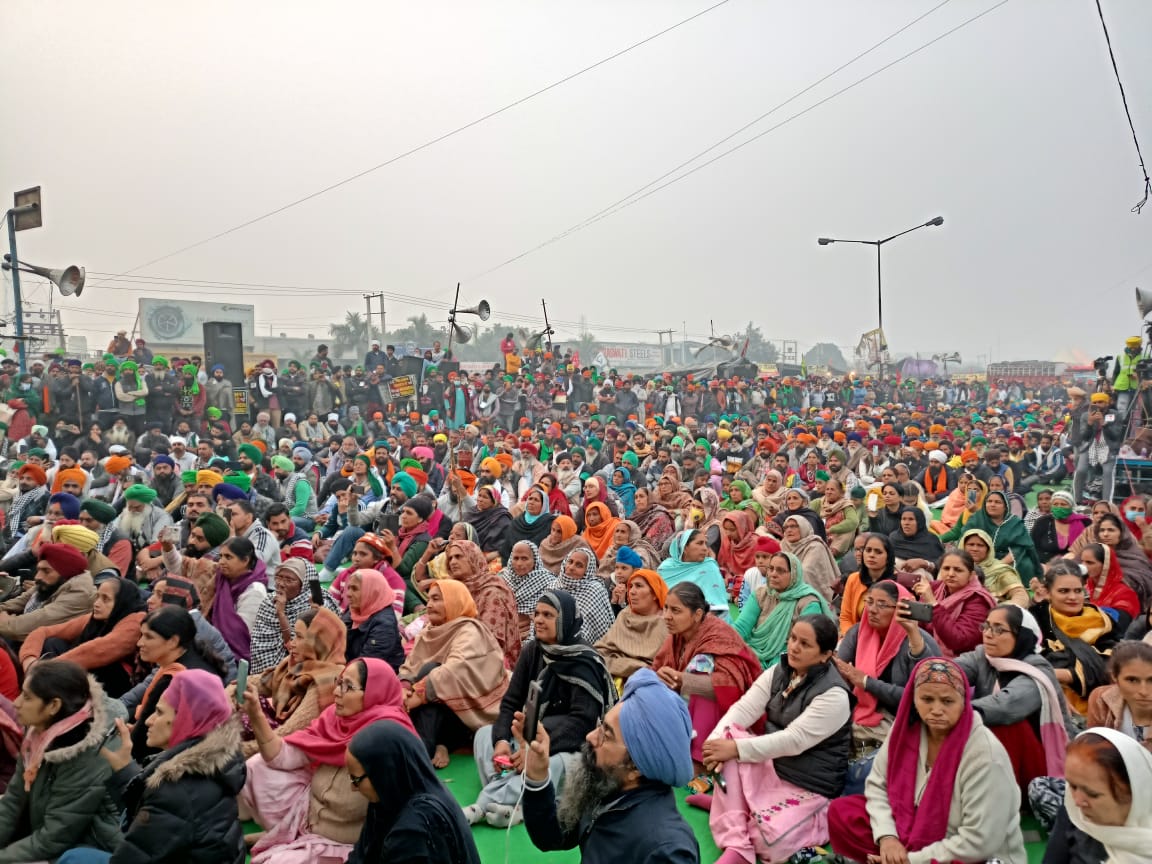 The politics of “restricted stretches”

After giving permission to the farmers’ parade on “restricted stretches”, the senior leadership of the city administration said 5,000 tractors will be allowed for the rally with “proper documentation” such as Registration Certificate and so on from 12 noon to 5 pm with only 5,000 participants. However, there is no deviation in the route approved.”

However, many of the youth participating are chafing at the restrictions. “We are not here to go 5 kilometres inside and then take a U-turn to ply on Delhi’s periphery. Jungle mein mor nacha, kisne dekha (who has seen the peacock dancing in the jungle). We will meet in the morning and take a decision on it,” said youth from the stage at the Ghazipur border.

Dharmendra Malik of the Bharatiya Kisan Union (Tikait faction) said farmers from across the country will organise parades in their own regions as well.

Another group of farmers said the rally was not some mere line of tractors but a tableau that would depict the evil effects of the laws and how the government has sold agriculture to a few corporate entities.

“The parade will expose the government completely. This is history in the making. We are urging people of Delhi to come out of their comfort zone to support us. Our agitation has a larger cause,” they added.

A private agency has been hired by the protesting peasants to ensure the safety and security of the rally. Around 500 volunteers will keep a tab as the parade starts. A war room has been set up at each protest site to ensure effective coordination during the parade. Each of the war rooms will have 40 members, comprising doctors, security personnel and a social media team.

Around 40 ambulances will be stationed on different routes to address any medical emergency. A farmers’ leader said around 3,000 volunteers have been deployed on the whole stretch to ensure that the parade remains peaceful and no untoward incident takes place. The volunteers have been given badges and identity cards.

A team of ex-servicemen participating in the protest will also keep an eye on the security situation. A team of mechanics has been formed to repair tractors if the need arises, reported PTI.

(Tarique Anwar is a journalist. The article was first published by Newsclick.)

The Omicron variant threat: Why it is time for the WTO IP waiver, rather than travel restrictions

Despite denial by NIA Court, why Anand Teltumbde has a right to temporary bail

To prove conspiracy, confessional statements of the co-accused alone are not sufficient, says SC

No leniency should be shown to an accused who is found to be guilty for offence under the NDPS Act: Supreme Court