Why has it been called and what will be its impact, writes SUBODH VARMA

Who has called for the ‘Bharat Bandh’ tomorrow (December 8)?

The initial call was given on December 4, by the Samyukt Kisan Morcha (Joint Farmers’ Front), a body that includes nearly 500 farmers’ organisations from across the country. They are leading the ongoing farmers’ protests, which include blockade of several highways entering Delhi and the protest actions held in several states since the blockade started on November 27. 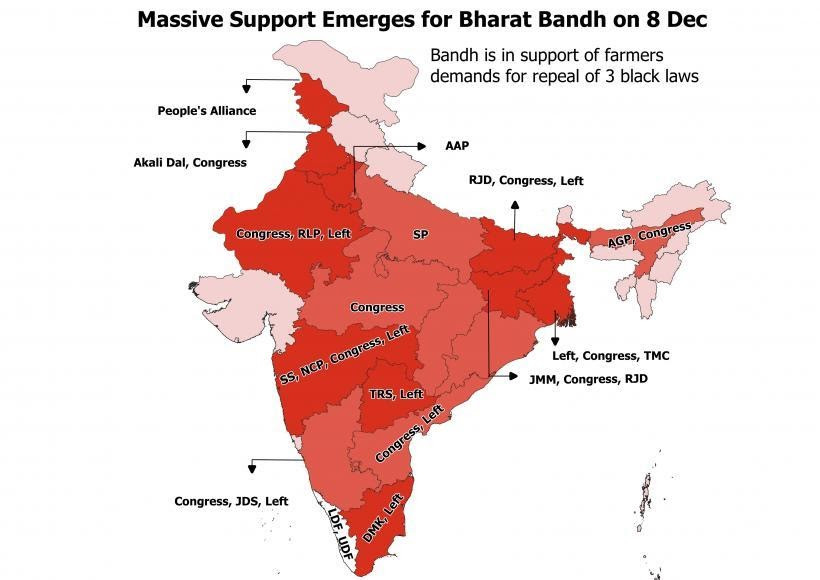 Why has this ‘Bandh’ been called?

Farmers had been protesting against the new farm laws since June this year when these three laws were first issued as Ordinances by the Narendra Modi government. In September, the government got these passed as laws (to replace the Ordinances) by ramming them through Parliament, without a proper discussion and voting.

All these months, farmers were protesting against them, pointing out that they had never been consulted, they had never demanded these laws, and that the laws would destroy the present system of farming, trade in agricultural produce and even storage and pricing of such produce.

After three rounds of talks with the agriculture minister and two other ministers, it became clear that the Modi government was unwilling to roll back the laws. Hence, the farmers have called for the Bharat Bandh to show their countrywide support and make the government realise its folly.

Yet the Modi government ignored the protests and blindly went ahead with the laws, probably thinking that with the pandemic raging in the country, no effective protest would materialise.

But the farmers were so angry with the laws that they decided to march to Delhi on November 26-27 , to register their protest. The marching farmers, mainly from neighbouring states, were met with tear gas, water canons and road blocks in Haryana, which they successfully broke and reached the Delhi borders at various points. They have since been camping there.

Shaken by these events, the Modi government invited them to talks with ministers for the first time. Earlier, the farmers had come in a delegation to meet the government but they were fobbed off by bureaucrats, with no meaningful talks taking place.

In the talks the government has indeed climbed down a bit by saying that they will consider making some amendments to the laws.

After three rounds of talks with the agriculture minister and two other ministers, it became clear that the Modi government was unwilling to roll back the laws. Hence, the farmers have called for the Bharat Bandh to show their countrywide support and make the government realise its folly.

Hasn’t the government conceded some of their demands?

In the talks the government has indeed climbed down a bit by saying that they will consider making some amendments to the laws. On the crucial issue of Minimum Support Prices (MSP), the government has said that it will continue the present system, and the same has been said for Agricultural Produce Market Committees (APMC) where farmers sell their produce to government agencies at MSP.

But, the government has refused to completely repeal the laws. Farmers are saying that cosmetic changes won’t be acceptable because their fears of corporate takeover of farming and agricultural commodity trade remain unaddressed.

So, what is likely to be the impact of the Bandh?

The Bandh is likely to have a very widespread impact because over the past 10 -12 days, the rigidity of the government has become well-known across the country, as has its dirty tricks to sabotage the farmers’ movement. The three laws have evoked deep anger and farmers are fearing that even their land might be threatened, and that they may be reduced to wage earners on their own land. So, there is widespread support for farmers’ protest in all states.

Farmers are saying that cosmetic changes won’t be acceptable because their fears of corporate takeover of farming and agricultural commodity trade remain unaddressed.

In addition, many political parties, especially regional ones have backed the movement. This will ensure that the Bandh will affect practically all states – some more some less, depending on organisational reach and strength.

Life in urban areas may not be affected much in many states but rural areas will see road blocks and toll plaza blockades in most states. In recent days, the burning of effigies of PM Modi and corporate bigwigs like Ambani have taken place in thousands of locations, while local road blockades have taken place everywhere. This shows that the farmers across the country are deeply involved and ready to fight it out.

(Subodh Varma is a senior journalist. Views are personal. The article was first published by Newsclick.)

No unrest, no sedition: How Lokmanya Tilak challenged Section 124A

Digital evidence in the shadow of Pegasus

SC issues notice to states, UTs on continuous invocation of unconstitutional Sec 66A, IT Act