Does the Indian Media Comfort the Afflicted or Afflict the Comfortable?

In a panel discussion hosted by the St. Stephen’s College, Delhi, ‘Does the Indian Media Comfort the Afflicted or Afflict the Comfortable’, speakers raised concerns over the spread of fake news in India, how the narrative is built especially in Indian TV news and why investigative journalism is important. RHEA BINOY reports.

IN a panel discussion organised by the St. Stephen’s College on Tuesday, on the topic, ‘Does the Indian Media Comfort the Afflicted or Afflict the Comfortable’, the speakers shed light on various concerns in the Indian media pertaining to issues of fake news, narrative building and investigative journalism.

Manisha Pande, Executive Editor, Newslaundry, who moderated the discussion,  pointed out that the media’s job is to comfort the afflicted and afflict the comfortable but the opposite of that was happening.

N. Ram, the Hindu Publishing Group Director and veteran journalist raised concerns over propaganda as well as fake news. “It is an understatement to say the media have not been doing their job. In fact, they have been doing awful things in many places,” he said. He also highlighted how the large parts of the media have been functioning as the propaganda arm of the government and the “Hindu Rashtra ideology.” 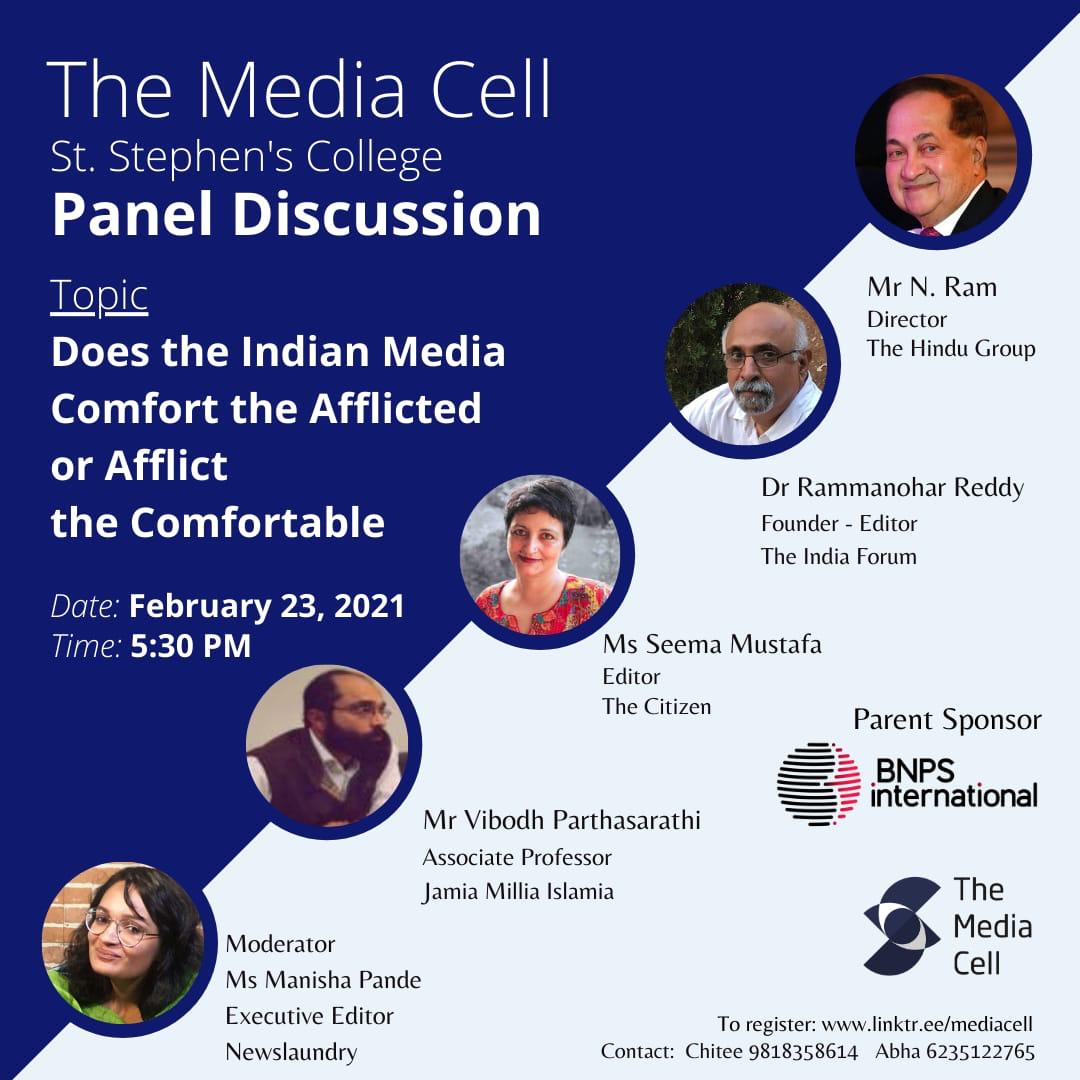 He also highlighted the issue of “fake news” released by the police, including defamatory allegations and also “toxic information” which is then attributed to the unnamed sources.

He cited examples of the coverage of the migrant crisis after the COVID-19 lockdown imposed in March 2020, the demonisation of the Tablighi Jamaat members who were stranded during the lockdown, and the communal violence which broke out in Delhi in February 2020.

He said that the farmers’ protest had initially received good coverage but later was overwhelmed by propaganda.

“It is the propaganda role that dominates”, he said underlining how this was one of the worst chapters for the media in 70 years.

The founder of The India Forum and former editor of the Economic and Political Weekly, Rammanohar Reddy, said it was the job of the media to fact-check news, particularly as fake news spreads. The media has not been doing its job in recent years, he added.

Vibhodh Parthasarathi, Associate Professor, Jamia Millia Islamia, said how media has always created a narrative and how the “directness and intensity is fueling the narrative.” He said that television news channels, in particular, created a narrative in an appealing way and unlike in TV news, people did not have an option of writing to the editor to question the narrative.

Media critic Krishna Prasad highlighted the “pathetic state of language media in India” and said it was “shocking beyond belief.”

Moving on to the topic of investigative journalism, N. Ram said “credible information, critical education on the topic, agenda building role and propaganda role is important in providing a conceptual framework to the investigative story.” He highlighted how it is important to “pick beneath the surface.” He cited an example of the book, ‘Out of Print: Newspapers, Journalism and the Business of News in the Digital Age’ by George Brock which “looked at the future” highlighting how it explored “verification, witness, sense-making and investigation” which is prevalent in today’s time.

He asked the aspiring journalists and journalists to not “fret of the outcome” and that “it does not depend on you alone.”

India has had a pretty good track record in terms of investigative journalism, he said, citing an example of the Bofors Scam during 1980 and 1990.

(Rhea Binoy is a journalism student at the Symbiosis Institute of Media and Communication, Pune, and is an intern with The Leaflet.)