No Result
View All Result
in History and law Leaflet Reports

“Human dignity becomes illusionary in the absence of a healthy environment,” said the Delhi High Court judgement on a plea regarding the Kidwai Nagar (East) Redevelopment Project. While the court refused to intervene or stay the construction, it acknowledged the loss caused by indiscriminately cutting trees. The land around Darya Khan tomb has been protected by the court on account of its status as a monument. A report by MANYA SAINI.

THE National Buildings Construction Corporation (NBCC) has been directed by the Delhi High Court to ensure compensatory tree plantation with regard to the extensive felling of trees during the construction of Kidwai Nagar (East) Redevelopment Project. The court was hearing a petition filed by senior advocate Aman Lekhi in opposition to the heavy infrastructural development in the area.

The single-judge bench of Justice Navin Chawla observed that redevelopment projects, with heavy construction, must be carried out keeping in view the stress it causes on the environment. He commented that it was necessary to find a balance between development and ecology as it should, “add to the quality of life rather than destroying it.”

The court has also taken cognisance of the NBCC’s intention to include the land of the Darya Khan tomb within the redevelopment plan. While not challenged in the plea, the court has stated that the 14-acre mausoleum complex is a protected monument, and thus no construction around it is permissible.

However, despite these noteworthy observations, the single-judge bench said that it will not interfere with the project, remarking that it was sanctioned by the authorities concerned in line with prevailing guidelines. The bodies responsible quoted by the judge include the State Level Environment Impact Assessment Authority, Delhi Pollution Control Committee, National Monuments Authority and New Delhi Municipal Council among others.

The Challenge of Re-densification

Re-densification, that is modifying existing dwellings to make space for population growth is the constant challenge of densely populated cities such as Delhi and Mumbai. Master Plan for Delhi (MPD-2021) projects that the national capital will need to accommodate approximately 23 million people by 2021. In a bid to meet this requirement, it has deemed redevelopment as the soundest strategy to increase the holding capacity of residential areas.

The plea had been filed on the grounds that the project was a major violation of the MPD-2021. It argued that the primary character of the area is residential reserved for government employees, and that cannot be changed in the redevelopment. It further said that the neighbourhood already remains cluttered and suffers from a lack of facilities, that will increase manifold with new construction.

The project aims to build housing for government employees under the General Pool Residential Accommodation (GPRA). It also includes commercial construction in the 86 acres allotted to the developers. The commercial towers are nearing completion and will be ready to start operations in the coming months. Meanwhile, approximately 1,500 families are already residing in the complex, as 55 out of 78 residential towers have been allotted to various government ministries and departments.

The Delhi HC  observed that it was the job of the government to meet the goals set in the MPD, however, it has directed the NBCC to not handover the property to the allottees till the compensatory plantation is completed. It further added that this applies to both residential and commercial tenants. 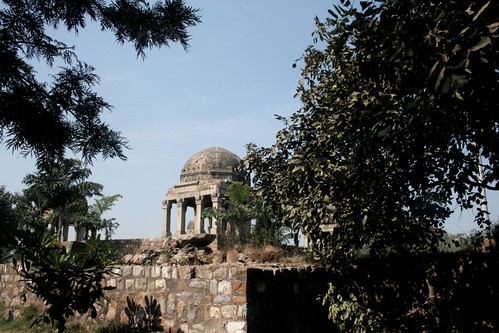 Even as the petitioners did not bring the Darya Khan Tomb to the court’s notice, in its judgement, the Delhi HC stayed all construction near the heritage site. It states, “there is a statutory ban on any construction over the protected area, the same, therefore, could not have been taken into account while sanctioning the plan and this court cannot shut its eyes to the said violation merely because there is no specific challenge to the same laid in the petition.”

The historic complex is the final resting place of Darya Khan Lohani, a high-ranking official of the Lodi dynasty. As per the information booklet of the Indian National Trust for Art and Cultural Heritage (INTACH), Khan was the chief justice during the reign of Bahlol Lodi. It adds that while the exact date of construction is unknown, it was built around the early 16th  century.

In 2018, Hindustan Times reported that the government plans to redevelop the gardens surrounding the mausoleum, adding a jogging track and a park to increase the appeal for urban settlers. It further adds that the gravesite is revered by locals who offer prayers on festivals at the monument. Rana Safvi, author and historian, observed, “Generations have been following this practice and consider the person buried in the tomb as their dada peer (family saint).”

The court has excluded 14 acres of land comprising the complex from the 86 acres sanctioned. No construction here has been permitted due to its status as a protected monument.

In its remarks, the High Court observed that a balance must be achieved between urban development and the ecology. It adds that on the one hand are the petitioners who argue for a right to a clean environment, and on the other are the respondents focused on infrastructure needs.

On the issue, the judgement concludes that “It is an established principle of law that Right to Life as envisaged under Article 21 of the Constitution of India includes the right to a clean environment. The right to live with human dignity becomes illusionary in the absence of a healthy environment. However, said rights are not absolute and have to co-exist with sustainable development.”

(Manya Saini is a student at the Symbiosis Institute of Media and Communication, Pune, and an intern with The Leaflet.)

Self-help Groups: Women Become the Change They Want to See in the World

Are Central Probe Agencies Tightening the Screws on Kerala CM?