Dear Maharashtra Government, There is No Such Thing as Consensual Rape

By interpreting rape in terms of consent, the Maharashtra government has placed it in laboratory conditions, neutralising inconvenient factors emanating from male dominance, writes HEMAL SHRINGLA.

THE recent amendment to Section 375 of Indian Penal Code on rape is thankfully under review and the outcome is awaited. The Bill is called Shakti. Like the victim of rape in Delhi in 2012 is called Nirbhaya. It’s unbelievable that the experience of rape should be sentimentalised like this.

But women’s suffering is cheap.

Politicians, mostly male, make token gestures. Like the concession of the death penalty in cases involving lower-caste and class rapists. Why don’t they concede a realistic budget instead and base laws on women’s experience of rape?

The latest fad is names and there will be many to choose from, given the conceptual richness of the Hindu imagination. Jwala, Jaya, Vijaya …the list is endless. How about Nirjara? It means the shedding of karma through penance. That’s a novel way of looking at rape.

The Shakti Bill’s proposed “explanation” to Section 375 clarifies that, in Maharashtra, wherever consent among adults is suggested or implied, a presumption of consent will be made. This reverses decades of rape reform. How is a woman to prove that she didn’t consent? She would need to ask her rapist to beat her black and blue. Mukesh Singh, one of Nirbhaya’s rapists, said on the record to the BBC that “she should have just been silent and allowed the rape,” in which case, he added, they’d have let her off once they were done. Are we celebrating Nirbhaya for that which resulted in her death? It is just so sad and perverse.

Absolute consent is no more than an idea. Like women are in the patriarchal imagination.

On a recent talk show, a prominent Maharashtra politician explained the amendment as “a little protection”, “a little justice” for men, given how “strict” rape laws are. Does he live, breathe and eat male entitlement?

The plot of a 2019 movie, Section 375, references one such “strict law”. Section 376(2) of IPC read with Section 114A of the Indian Evidence Act states that in the case sexual intercourse is established between an accused who is in a position of power or authority exceeding that of the victim and the victim claims that it was without her consent, the court will accept that she did not consent and that rape effectively took place.

In the film, Rohan Khurana, an upper-caste filmmaker, is convicted for the rape of Anjali Dangle, a Dalit costume assistant, on the basis of this law. If the Maharashtra cabinet saw the film it must have left them aghast. But the Chinmayananda case should reassure them. The law student in question said she used to be brought to him twice a day at gunpoint. However, the court ruled that their relations were consensual. Is this what the Maharashtra government wants for women? 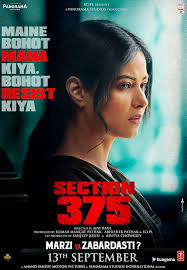 Absolute consent is no more than an idea. Like women are in the patriarchal imagination. In Mother India (1957), Nargis plays Radha, a peasant woman who is a personification of the ideas newly-independent India had about itself. She is deserted by her husband and propositioned by Sukhilala, the village moneylender. But she refuses his advances and brings up her sons alone in the midst of dire poverty. She even tills the earth bearing the yoke on her back. And at the end of the film, she unbelievably shoots her errant son, Birju, to prevent him from abducting the moneylender’s daughter. She is the protector of the ‘laaj’ of her village, i.e., its caste-class-gender status quo. But in real life, this is not how poor and broken mothers behave. Ram Bai, Mukesh Singh’s mother, begged Asha Devi, Nirbhaya’s mother, for her criminal son’s life. Is someone going to make a movie about that?

Are we celebrating Nirbhaya for that which resulted in her death? It is just so sad and perverse.

Women actually maintain the status quo by agreeing to be victims. Ghar in 1978 was considered a progressive movie for its time. Aarti, played by Rekha, is a young middle-class housewife. She is gang-raped, predictably by four drunken lower-class youth. Rekha excels as usual. You see her, neat as a pin, diligently doing household chores. But her listless gait is that of a woman whose body is not her own. You suddenly feel this could be another story. Maybe she was raped as a child by an uncle or was being raped by her father-in-law, her husband’s boss, or her husband himself. This is not a case of the imagination gone awry. Acquaintance rapes far outnumber stranger rapes and incest is the biggest skeleton in the patriarchy’s closet.

By interpreting rape in terms of consent, the Maharashtra government has placed it in laboratory conditions, neutralising inconvenient factors emanating from male dominance.

Rape laws are notoriously ineffective, not only in India but all over the world, because of this. In Pink (2016), the key phrase repeated over and over again is “no means no”. But what is “no”?

When Mahmood Farooqui was accused of rape by his friend and mentee, a 2017 Delhi High Court judgement ruled that “a feeble no may mean yes”.

Kapil Sibal, as urbane a lawyer as he is, based his case on the ‘boys will be boys’ argument. He effectively said that once Farooqui got going, it would be unfair to expect him to stop.

The judges also questioned how the victim could have sent him an email saying that she loved him after he raped her. But trauma reactions are counterintuitive. In a man’s world, when trust is betrayed, women’s reactions are based on fear, not anger. They desperately want their rapist to make up for the betrayal and set their world right. Their response may seem totally illogical. The psychology of victims is complex. The Maharashtra government should have consulted experts to factor it into their amendment.

Section 375 makes an effort at a more complex understanding. The ‘marzi ya zabardasti’ (consent or force) story is a cover. Hidden under it is another situation. Anjali Dangle is actually having an affair with Rohan Khurana. When she wants out because he treats her badly, he threatens her career. So, she fakes a rape and gets him convicted. The movie has been criticised for confirming stereotypes of women as dangerous liars. But it’s not that simple. “It wasn’t rape but was no less than rape,” Anjali says, underlining the trauma of sexual harassment at the workplace. Her lawyer too qualifies her exploitation by Khurana as repeated rape over an extended period.

Sadly the #MeToo movement in India hasn’t made much headway. Sexual harassment at the workplace continues to be a huge threat.

Someone should explain to Maharashtra’s ministers that the injustice they mete out to women is full of dramatic potential and makes for great cinema. They are afraid of ‘the avenging woman’ and make laws to protect men from her depredations.

Anjali Dangle must have struck terror into the hearts of the Maharashtra cabinet, especially when she inflicts injuries on herself, banging her head hard and repeatedly against the concrete wall in a deserted stairwell with her hair flying all over the place. Who is this wild, ferocious and determined being, they must have asked themselves. Someone should explain to them that the avenging woman is only a persona, that the injustice they mete out to women has rich dramatic potential and makes for great cinema. They should also be told that scary creatures in stairwells are a projection from the depths of their own being and that they should not believe in their own fiction.

Rape victims in real life can’t avenge themselves. Not under patriarchy. The only revenge available to the young girl raped by Kuldeep Singh Sengar is to set herself on fire in front of the Chief Minister’s office while his cohorts beat her father to death and hang around her home like ghouls.

Nirbhaya and the little eight-year-old from Kathua, mangled beyond belief, had no option at all. They carried their trauma to the grave.

Rape laws based on consent favour men and will remain ineffective.

The survivor in Farooqui’s case had said, “The message the Court has sent out not only to me, but to all women is that the lived experience of rape by a man known to them cannot fit into their imagination of rape. “

New Media Rules: An Over The Top Distraction?

Global #MeToo was the first mass movement against sexual abuse

Kerala Caught Between the Devil and the Deep Sea Over Rs 5,000-cr Fishing Investment Project

A Close Reading of Farmers Produce Trade Act: Does it Make Farmers Free to Trade?

UP Uses Facial Recognition Technology to Mete Out Discriminatory Treatment

New Media Rules: An Over The Top Distraction?

Global #MeToo was the first mass movement against sexual abuse