No Result
View All Result
in Obituary

CPI(M) Leader Mythily Sivaraman, a Crusader of Women’s and Workers’ Rights, Passes Away

The veteran CITU and AIDWA leader was suffering from Alzheimer’s for a long time, but was taken away by COVID-19 on Sunday.

MYTHILY Sivaraman, veteran Marxist leader, a champion of workers and women’s rights and a formidable name and popular political leader from Tamil Nadu, passed away in Chennai on Sunday. She was 81 and is survived by her husband and daughter.

Sivaraman, a leading member of the Communist Party of India (Marxist), was suffering from Alzheimer’s for a long time and had recently tested positive for COVID-19.

One of the founding members of the All India Democratic Women’s Association (AIDWA) along with another popular women’s leader, Pappa Umanath, she was also its former vice-president, as well as a trade union leader associated with the Centre of Indian Trade Unions (CITU). This the second big loss of a woman leader to COVID-19 by CITU, which recently saw the death of its former treasurer, Ranjana Nirula, in Delhi. 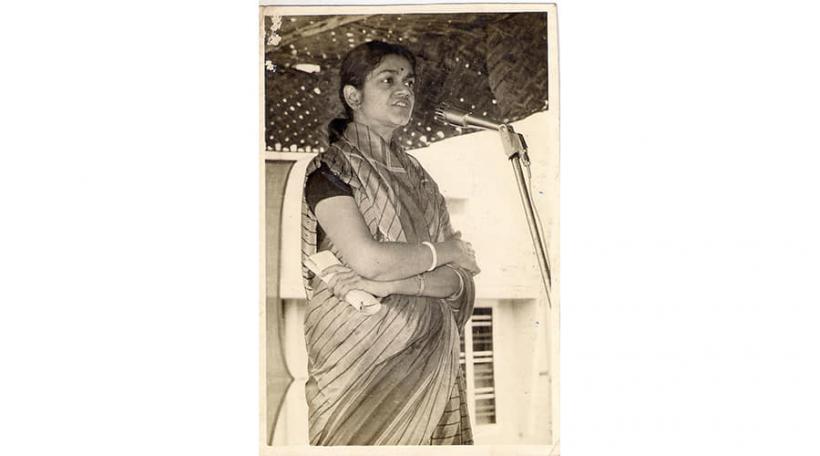 Born in 1937 and educated in Syracuse University, Sivaraman worked in the Permanent Mission of India to the United Nations in the mid-1960s as a research assistant. She was a crusader against imperialism during the anti –Vietnam War movement.  She then left  a promising career and returned to India to work with the Left movement and played a key role in organising workers and women in Tamil Nadu.

The popular leader was in the forefront of various struggles, such as the rights of survivors in the Vachathi rape case and the Thanjavur Kilvenmani massacre involving dalits. Sivaraman wrote various articles and essays on the issue, which were later published as a book, ‘Haunted by Fire’, compiled by writer V Geetha and her daughter, Kalpana Karunakaran.

“Forty-four women and children from Dalit families died in their homes due to arson committed by upper caste groups leading to the Keezhvenmani massacre and Mythili was among the first to visit and document the brutality,” said a report by News Minute.

Her death was condoled by Tamil Nadu chief minister M K Stalin and leaders, activists, writers, academics and citizens from across the spectrum.

CPIM Politburo expresses its deep grief at the passing away of Comrade Mythily Shivaraman, veteran leader of the Party in Tamilnadu and the women’s movement in the country.https://t.co/aTKNv3YoNu pic.twitter.com/gwJXu21yrI

Expressing “deep grief”, a CPIM) polit bureau statement recalled that she led many struggles against caste and gender oppression, notable of which was the struggle of the tribal women of Vachathi. Earlier she had conducted a searing investigation of the massacre of dalit agricultural workers in Keelvenmani in 1968.

“A dedicated Marxist, she worked as a member of the Tamilnadu CPI(M) State Committee for more than two decades. Mythilli wrote a number of important articles and booklets on class and gender issues in Tamil and English.”

CPI (ML) leader Kavita Krishnan, tweeted: “Mythili remained a fiery trade union organiser in Tamil Nadu, an AIDWA office bearer, and also a Marxist writer of rare insight and rigour. A rare and most precious quality of hers was her total lack of any left sectarianism.”

"The former AIDWA vice-president drew people’s attention to the massacre of Dalits in Keezhvenmani in east Thanjavur through her writings." #MythiliSivaramanhttps://t.co/2Wlj8MePAM

A candid interview of her by Gnani: https://t.co/9h2DUSJRLU

K Chandru, former judge of the Madras High Court, who was Sivaraman’s friend for 53 years, told The Hindu: “ I still remember the first meeting she addressed at Mangolai in Mylapore against the Vietnam war. We maintained our friendship even after I was expelled from the CPI(M). She attended my swearing-in ceremony as a judge of the Madras High Court.” Chandru said he had dedicated his book, Order Order, to Mythili Sivaraman.

Gail Omvedt was a champion of Dalit-Bahujan rights