It is not often that one gets good news from Goa’s mining-affected areas. But the 2020 monsoon season has, for the first time in decades, brought a ray of hope to the villagers of Shirgao, a mining village in North Goa. Their fields — once hopelessly degraded by mining rejects and pollution — will see bountiful rice harvests this October.

Without a doubt, the villagers would give full credit for this extraordinary return of their rice fields — and the creek which girds them — to the Goa Bench of the Bombay High Court. Not to any one particular judge. But to the Court as a whole. It is interesting to relate that every single bench of judges that heard the Shirgao villagers public interest petition initiated in 2008, was moved by the plight of these simple folk.

They had been deprived of their clean pristine air,  their water sources, and their entire livelihood as farmers due to the careless and impudent mining activities of three large mining lease-holders.  The judges sympathised with their plight and through their numerous orders provided some relief. A satisfactory solution finally emerged this year.

The Shirgao story began when the Chinese demand for iron ore shot up due to construction activity for the 2008 Olympics. The result was there was a sudden spurt of iron ore mining operations all over Goa.  It expanded rapidly and soon ore was being extracted without necessary precautions for public health and safety.

Discarded mounds of earth were carelessly dumped in all available spaces, creating new mountains with unstabilised slopes. During the monsoons, rivers of mud flowed onto the roads and into the fields, nullahs and rivers.

Shirgao village was especially badly affected due to its immediate proximity to these mining activities. The small village of about 470 households is ringed on three sides by hills on which three large mining companies — Bandekar Mines, Chowgule Mines and Dempo mines that were later known as Sesa Goa and then Vedanta.

Not many months ago, Justice Gautam Patel had proclaimed from the bench: “Goa is a land worth fighting for.”

They had been given leases, one next to the other, literally dwarfing the tiny village hamlet. On one side lay around 80 hectares of agricultural fields. Before mining expanded recklessly in the hills above, these fields yielded a bountiful harvest, twice a year, due to the easy availability of water fed by the monsoon and several perennial streams like Dhonachi Tali, Kaswachi Ped, Ayurvedic Zor and Vajra Whal. Some of the streams had medicinal properties as well.

The fields were encircled by a rivulet or creek that would absorb the overflow from the fields and from there onwards flow into the River Mandovi down towards the sea.  It was a  perfectly harmonised ecosystem designed to last through the ages.

Besides, there were 74 wells catering to the domestic needs of the people. Villagers say that it did not run dry even in summer.

Such was the sheer luxury of ample water supply in Shirgao that in May each year, the village traditionally hosted the Goddess Lairai Zatra Festival where lakhs of devotees from all over Goa and beyond, visited the temple o pay their obeisance.

For the Dhonds, bathing in the Dhonachi Talao twice a day was mandatory. Simple but sumptuous vegetarian meals and sweets were freely served to all who visited the village. This was the famed hospitality of Shirgao village, known far and wide.

But, by 2005, it had all changed. The relentless mining excavations went below the groundwater aquifer line and soon, all the 74 village wells went dry. The medicinal springs and streams also withered away.

The agricultural fields were now filled with mining silt which formed an impermeable layer, ranging from one foot to more than a meter in places, which no plough could break, and in which no seed could survive.

The tops of the coconut trees shriveled and toppled to the ground. Soon famed Shirgao was without its rice, coconuts, and water. Instead, a huge cloud of red dust pervaded the village, settling on the people and their homes, while the only sounds that dominated were of the mineral ore laden trucks racing down the narrow village road one after the other, every minute of the day and continuing into the night hours.

In December 2008, 112 villagers wrote a brief but poignant letter to the High Court explaining their plight and requesting for water, for the return of their agriculture fields and for relief from the dust pollution.

I happened to be in court as four of them — simple men dressed in half pants and bush shirts, like Goan farmers usually do, and who could not speak English — stood silently before the two judges who leafed through their letter. The Court decided to convert their letter into a Public Interest Litigation (PIL) and requested me to assist the case as Amicus Curiae (friend of the court).

The revival of mining villages and their ecosystems is distinctly possible.

The first good order that they got was a halt to all mining activity during the week long Goddess Lairai Zatra Festival. The villagers were delirious with joy. Finally, they could worship, without getting mud all over their finery.

This was followed by a Court-supervised Memorandum of Agreement between the three mining companies, the State and myself (representing the villagers) through which the mining companies agreed to pay for 500 litres Sintex water tanks to be supplied to each household and to send an adequate number of water tankers to fill them with potable water. The government also agreed to increase its own supply of water to the village.

Later, the Government constructed two large overhead water tanks from which piped water continues to be supplied to all the village households to date. There is no shortage of water for domestic purposes in Shirgao village any longer. 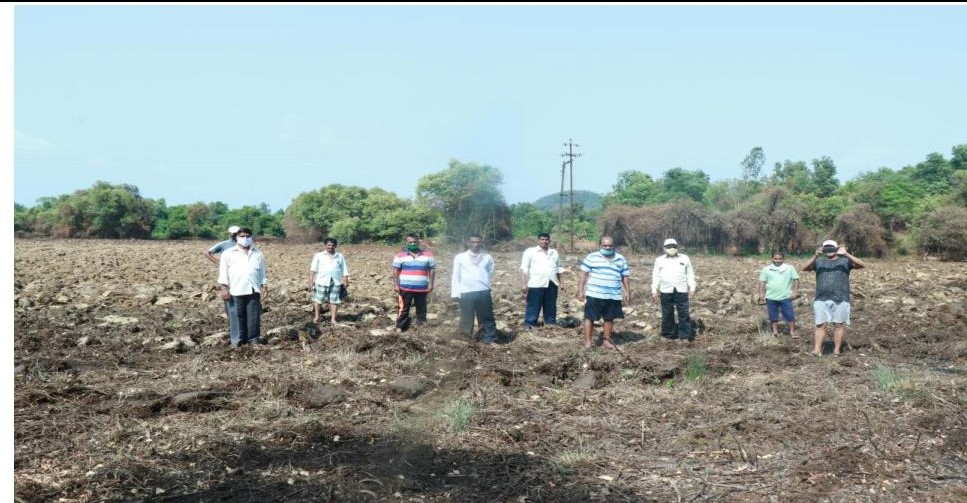 (The farmers at their fields ready to begin cultivation after desilting and removal of vegetation. Picture credit: Keshav Deshpande)

After conducting several site visits to Shirgao village and after testing several soil samples, NEERI submitted a report in March 2009 which categorically affirmed that it was the mining activity that had indeed devastated the village.

NEERI suggested some “technical and engineering” solutions to restore the water in the village wells. These included water absorption trenches, rooftop harvesting structures, subsurface dykes, and bentonite grouting. None worked. The wells continued to remain dry even in the month of July when every well in the rest of Goa had water to its brim.

“The solution is actually very simple,” they chorused. “The water from our wells is draining into the mining pits which are below groundwater level. Put the mud back into the pits and the water will stay in our wells like before.” But that was easier said than done.

Of course, the mining companies disputed NEERI’s findings and the solutions. The Pollution Control Board modified the suggested remedial measures and directed compliance from the mining lease-holders. But the villagers’ logic was impeccable: “The solution is actually very simple,” they chorused. “The water from our wells is draining into the mining pits which are below groundwater level. Put the mud back into the pits and the water will stay in our wells like before.” But that was easier said than done.

The Court monitored the progress of compliance of measures through the affidavits filed by the State Pollution Control Board which, sad to say, were mostly based on the reports filed by the mining companies. When the companies claimed that they had completed the removal of all the silt from the fields and had even cultivated two crops, the villagers laughed. “It was only a small testing area where they tried to grow rice,” said the villagers. No independent authority like the Agriculture Department was willing to confirm the claims.

Thereafter, the PIL continued to languish, with the villagers insisting that their fields were still under silt while the company lawyers vociferously protested in court that the villagers were not actually interested in farming and only wanted monetary compensation for their perceived losses.

The stalemate continued until the Mines & Minerals Act was amended in 2015. The new provisions required the government to set up District Mineral Foundations (DMF) which would be financed by a percentage of the returns from the sale of minerals.

The objective was to share some of the economic benefits from mining with the villagers negatively affected by mining activities. Within three years, a sum of Rs.90 crores accumulated in the North Goa DMF, and a similar amount was deposited in the South Goa Fund.

It needed one more push from the High Court for the DMFs to become activated. Sonshi village, another mining-affected village in North Goa, got relief from the DMF first. On a petition filed by the Goa Foundation, the High Court directed the DMF to provide water and Sintex tanks to all of Sonshi’s village households — an exercise similar to what was done for Shirgao a decade earlier.

The objective was to share some of the economic benefits from mining with the villagers negatively affected by mining activities.

The Court also directed the DMF to examine the issue pertaining to the de-silting of the agriculture fields of Shirgao. It was then that the Agriculture Dept and the Water Resources Dept put their heads together and came up with a figure of Rs.4 crores that would be needed to de-silt all the 80 hectares. The figure included costs of rehabilitating the nullah which had got so silted up in the past decade that water and silt from the nullah were now flowing back into the fields, resulting in thick wild grass, more than a meter tall, growing in most of the fields. 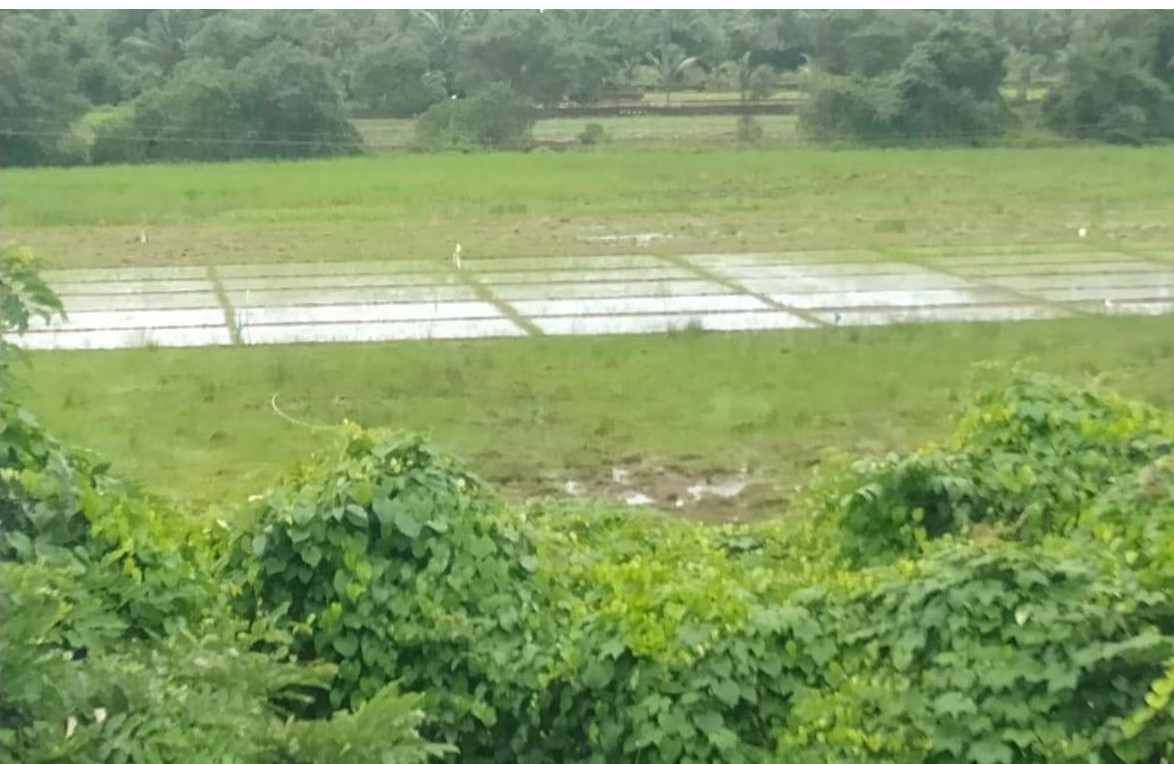 The Pollution Control Board now insisted that the Polluter Pays Principle be applied and that the mining companies be directed to pay the costs. The howl of protest from the companies cut no ice with the Court. On 18th December 2019, the Court insisted: “The work must start!” The DMF agreed to put up Rs. 2 crores and the Court directed the three mining companies to pay Rs. 65 lakhs each as an interim measure. The time frame for completion: One year.

On 31st January this year the villagers welcomed a brand new JCB assigned to Shirgao for the work of dredging the nullah and de-silting the fields. The villagers invoked the blessings of the Goddess Lairai and celebrated with the distribution of sweets. They never believed this day would ever come. Relentlessly working over the past four months despite the COVID pandemic, the nullah and approximately 30 hectares of fields were cleared of vegetation or de-silted by the end of May, allowing the fields to be planted for the first time in decades.

A few days ago, one of the villagers sent us pictures of a huge stretch of paddy field in Shirgao under cultivation, the green stalks of rice swaying in the breeze. Upon enquiry, I was told that 25 hectares had been cultivated. They were now confident that by the next year, they would claim and plant all the 80 hectares.  The nullah with a new sluice gate) was also de-silted. The threat of reverse flooding of the fields is gone.

The Shirgao petition remained before the High Court for 12 years.

The joy I have felt in seeing those pictures of green fields is simply unmeasurable. Not many months ago, Justice Gautam Patel had proclaimed from the bench: “Goa is a land worth fighting for.” The revival of mining villages and their ecosystems is distinctly possible. Every village affected by mining would do well to follow Shirgao’s example.