ATTORNEY General for India KK Venugopal has declined to give his consent sanctioning activist Saket Gokhale to file a contempt of court petition against former Chief Justice of India (CJI) Ranjan Gogoi for his statements against the judiciary and the Supreme Court.

In his order, AG Venugopal said “It is true that in the interview, Gogoi initially has made some strong statements about the judiciary and the Supreme Court. This apparently reflects his deep frustration with the ills that undoubtedly beset the justice delivery system”.

It is obvious, the AG said, that all that has been said was for the good of the institution and will not in any manner scandalise the court or lower its authority in the eyes of public. 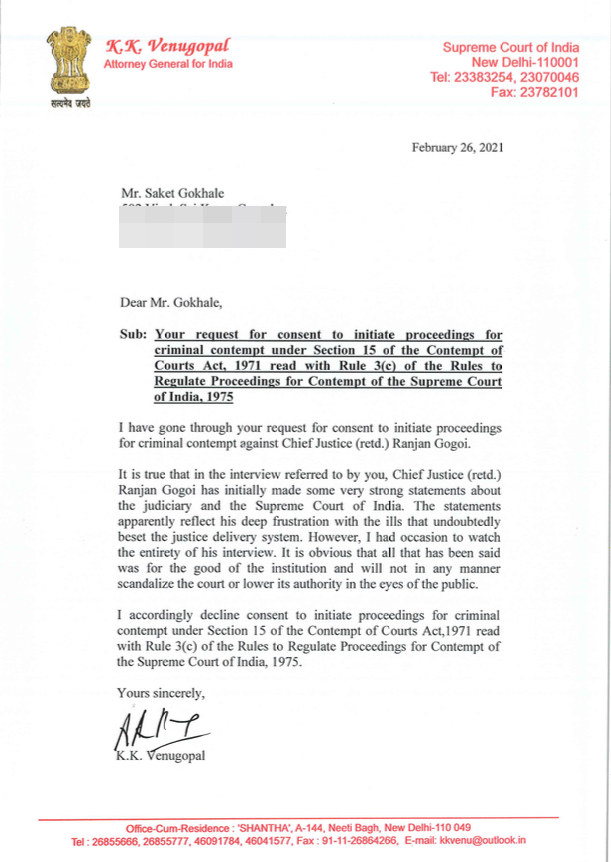 Speaking to India Today last month, Gogoi said he won’t take his grievances to the country’s courts as it would just result in an endless wait for a verdict. He went on to say that the country’s judiciary was in a “ramshackled” state.

“If you go to court, you don’t get a verdict, all you do is wash your dirty linen,” he said while speaking at an event in Delhi organised by the India Today Group. “Who goes to the court? You go to the court and regret,” Gogoi added while saying that it is only the big corporations who can afford to wait for verdicts in Indian courts.

The consent of either the Attorney General or the Solicitor General is necessary under section 15 of the Contempt of Courts Act 1971, for initiating contempt proceedings against a person.

SC upholds NCLAT order on winding up of Devas Multimedia