No Result
View All Result
in Judiciary

The Gujarat High Court on September 23 imposed costs of Rs.500/- on an applicant/accused who was found spitting openly during a virtual hearing.

Admonishing the conduct of the accused who was present in the Court, Justice A. S. Supehia refused to take up his petition for the day and directed that the matter be heard on October 7 subject to the accused depositing the costs in the registry. 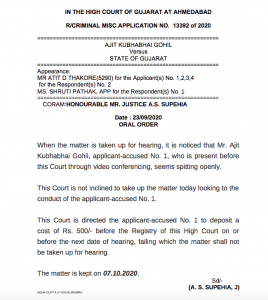 Earlier, Justice Supehia had imposed a cost of Rs.10,000/- on a lawyer for smoking while sitting in his car during court proceedings by way of video conferencing.

“This Court seriously deprecates such conduct of the advocate Mr.J.V.Ajmera. It was not expected from an advocate to be smoking in the car during the Court proceedings. Such behavior of the advocate is required to be strictly condemned”, Justice A S Supehia had said.

Justice Supehia had gone on to observe that advocates appearing through video conferences are required to maintain a minimum dignified decorum so that the majesty and dignity of the proceedings as well as the Institution are maintained.