No Result
View All Result
in Right to Information

2,55,602 appeals and complaints were pending in the 26 information commissions till June 30, according to a report.

byNewsClick
in Right to Information

October 12 marked 16 years of the RTI Act, 2005. The law has empowered millions of citizens to seek information and hold the government accountable. Section3 of the Act states: “Subject to the provisions of this Act, all citizens shall have the right to information.”

The ‘Report Card on the Performance of Information Commissions in India, 2021’, prepared by Satark Nagrik Sangathan, a citizens’ group working to promote transparency and accountability in government, examines the performance of all 29 commissions in India in terms of the number of appeals and complaints registered and disposed of by them, the number of pending cases, the estimated waiting time for the disposal of an appeal/complaint filed in each commission, the frequency of violation penalised by the commissions and transparency in their working.

“The pandemic highlighted the urgent need for accurate and easy-to-access information on the availability of hospital beds, essential drugs and medical equipment, like ventilators, in health facilities. It underlined the significance of information dissemination related to relief measures announced by governments and where public money is being spent in the efforts to combat the pandemic,” the report stated.

The report found that several ICs were non-functional or were functioning at reduced capacity as the posts of commissioners, including that of the chief information commissioner (CIC), were vacant during the period under review.

The finding, the report, stated was “particularly concerning given the humanitarian crisis induced by the COVID-19 pandemic, which has made people, especially the poor and marginalised, even more dependent on government provision of essential goods and services like health care, food and social security”.

Without access to relevant information, citizens are unable to get their rights and entitlements and corruption thrives, the group said.

Four information commissions—in Jharkhand, Tripura, Meghalaya and Goa—were non-functional several times during the period under review as the posts of commissioners were vacant. Three commissions were defunct at the time of publication of the report.

In the absence of functional commissions, RTI applicants are unable to access information, the report pointed out. In Jharkhand, the CIC of the state commission demitted office in November 2019. Subsequently, the lone information commissioner was also made the acting CIC despite no such explicit provision in the Act.

Since the completion of the commissioner’s tenure on May 8, 2020, the information commission has been without any commissioner, effectively rendering it defunct, the report found. For the last 18 months, people seeking information from public authorities under the jurisdiction of the Jharkhand SIC have had no recourse to the independent appellate mechanism prescribed under the Act if their right to information was/is violated.

In Tripura, the IC became defunct on July 13, when the tenure of the sole commissioner, who was the chief, was over. Since April 2019, this is the third time the commission has become defunct. It was defunct from April 2019 to September 2019 and then again from April 2020 to July 2020, according to the report.

Using the data on the backlog of cases in ICs and their monthly rate of disposal, the report computed the time it will take for an appeal/complaint filed with an IC on July 1 to be disposed of (assuming appeals and complaints are disposed of in chronological order). 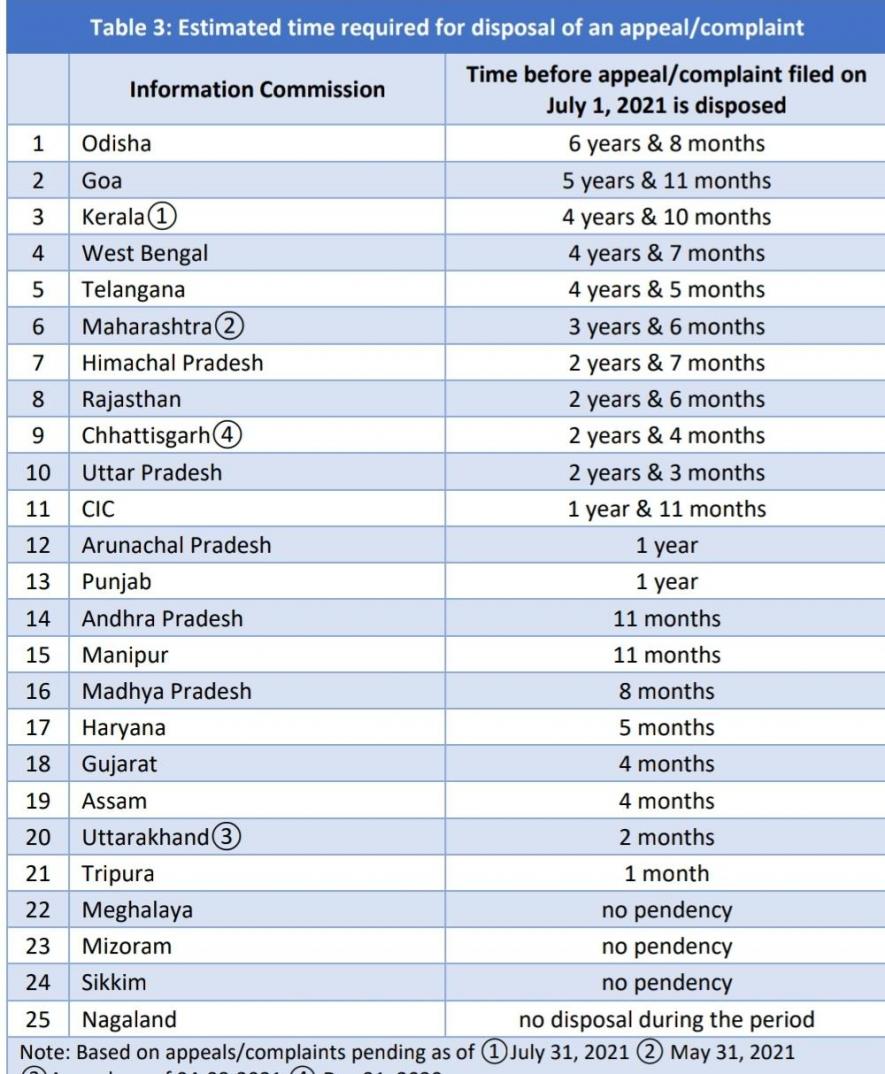 The report stated that relief and welfare programmes funded through public money are the sole lifeline of millions who have suddenly lost income-earning opportunities after the lockdown. “If the poor and the marginalised affected by the public health emergency are to have any hope of obtaining the benefits of government schemes, they must have access to relevant information.”

The role of ICs is “crucial to ensure that people can obtain information on health care facilities, social security programmes and delivery of essential goods and services meant for those in distress”, the report added.